It is often incomprehensible why Americans have such a penchant for royalty, given how the nation was formed. However, if Americans truly want royalty, look no further at the Utah Arts Festival than the music industry.

And, few groups capture the royal identity better than the Royal Southern Brotherhood, the powerhouse group out of New Orleans packed with talent from some of the greatest musical families of the purest American music traditions: Cyril Neville (The Meters, The Neville Brothers) on percussion and vocals; Louisiana instrumentalists Charlie Wooton (ZABADODAT) on bass; Yonrico Scott (Derek Trucks Band, Yonrico Scott Band) on drums, and the newcomers on guitar: Bart Walker (The Screamin’ Cheetah Willies) and Tyrone Vaughan (son of Jimmie and nephew of the late Stevie Ray Vaughan). 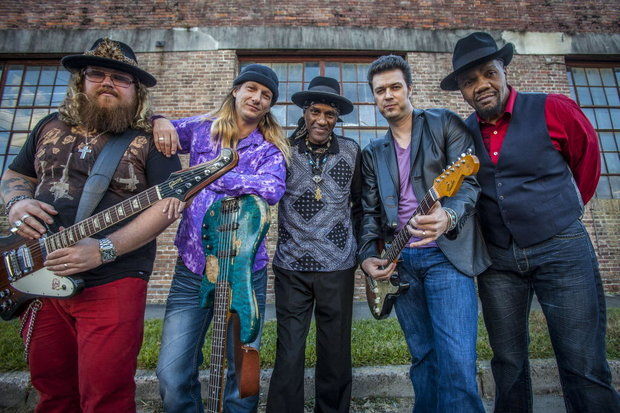 Their latest album, recorded in the kingdom of fabled Muscle Shoals, Alabama Don’t Look Back: The Muscle Shoals Sessions is as fitting a royal representation of the unique synthesis as blues, soul, rock, and funk could ever be imagined. It captures the best elements of the American sound from the last fifty years.

Neville, 65, and energetic as ever, says in an interview with The Utah Review, says the band’s fit is “perfect like the best gumbo starting with the roux.” And, when it comes to the desired groove, Neville says, “there is a lot more pocket and a lot more rhythm.” The concept of the pocket is an esoteric one not left best to be described in words, as it really manifests itself in the company of live musicians who jam together and respond instinctively without need for instruction, direction or clarification. It requires deep, authoritative musicianship, much like one of the great basketball players who knows how to handle the ball with a firm bounce. In funk, for example, it can be the perfect coordination between bass guitar and drum.

Neville says the newest musicians Walker and Vaughan have brought the extra strength and the pocket is always evident. “I saw Tyrone [Vaughan] play in Austin five years after Katrina and at the time I didn’t know who he was or the connection to the name.” Then, later, when the band was searching replacements for founding members Mike Zito and Devon Allman (son of Gregg and nephew of the late Duane) who left to pursue new ventures and projects, serendipity occurred. “Right during the time we found Bart [Walker], we reconnected with Tyrone and right from the start, their distinct styles blended together,” he says. When they arrived at Muscle Shoals to record their first album together, Neville says, “we all felt right at home. It now was our dream team.”

Indeed, the band’s latest album, produced by Tom Hambridge, is different but a natural progression from the group’s earlier efforts, given the different personnel. With a more prominent funk vibe, the band’s sound now is, again in Neville’s words, “solid, straight ahead in the pocket.”

Walker and Vaughan bring wide palettes of influences and training to the band. Walker is a gifted vocalist and songwriter, as evidenced in his own 2013 release Waiting on Daylight. In fact, Walker already had written most of the lyrics for the album’s title track Don’t Look Back before he joined the band. When he became a member, he handed it off to Neville and the two finished the song. “At the instant I saw the title, I knew Walker was going to be just fine in the band,’ Neville says.

Vaughan, with a strong work ethic that did not rely on any passes given his family’s tremendous musical lineage, played his way through the Austin scene, absorbing from every available master guitarist and honing his technique not only for rock but for the core elements of blues, funk and southern roots.

Neville, already blessed with a long storied career created within his own family and one of New Orleans’ most respected musicians, is as youthful as ever. Resilient and optimistic as he ever can be, Neville says his art keeps him going and rising above the risk of becoming bitter, “Love is a universal language and music is basically love to a beat. As Maya Angelou said, ‘hate, it has caused a lot of problems in the world, but has not solved one yet.’”