Late last year, it took only a few hours for a social media controversy to erupt that would force the Old Navy clothing company to pull a line of T-shirts and sweatshirts which featured the tag “Young Aspiring Artist” with the word “artist” crossed out and replaced with “astronaut” or “president”. 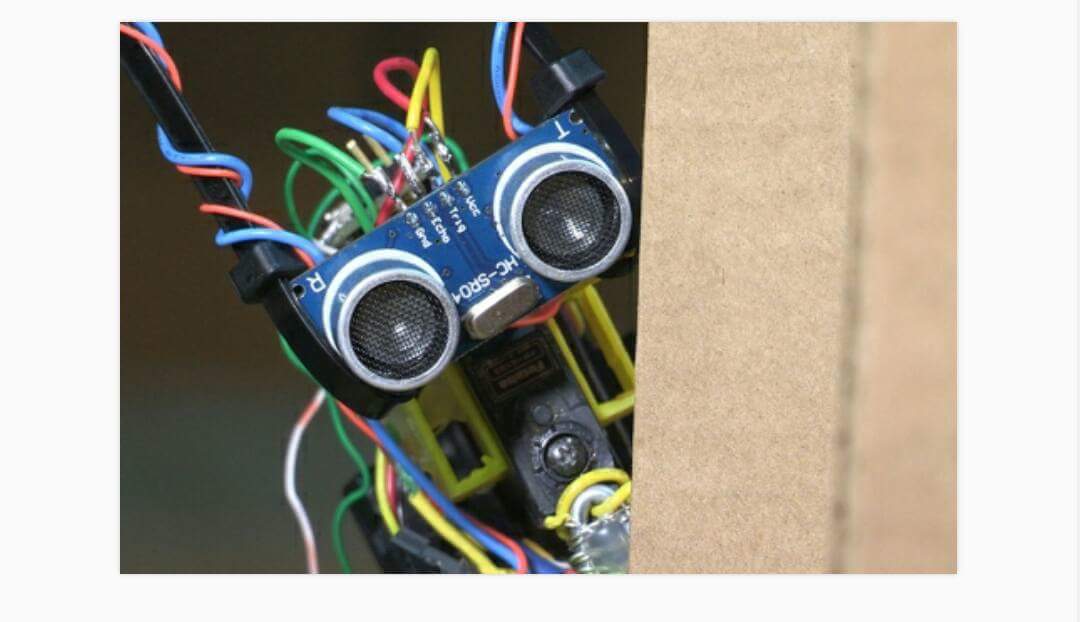 The controversy brought a torrent of examples about how art is especially important in the lives and work of scientists and even astronauts. In 2014, NASA flight engineer Karen Nyberg did a star-themed quilt block in space, working in zero gravity, which was added to a gigantic quilt at an international festival in Texas. Alan Bean, an Apollo astronaut who walked on the moon in 1969, left NASA 12 years later to become a successful full-time painter.

Here on Earth and, more specifically, this year’s Utah Arts Festival, members of Make Salt Lake, Spy Hop Productions, ProVolt (the maker group from Provo) and Morph3D will be showing just how kids and even adults can easily learn how to make the creative piece of the ‘A’ (art) that connects directly to a fresh interest in STEM (Science, Technology, Engineering and Mathematics). 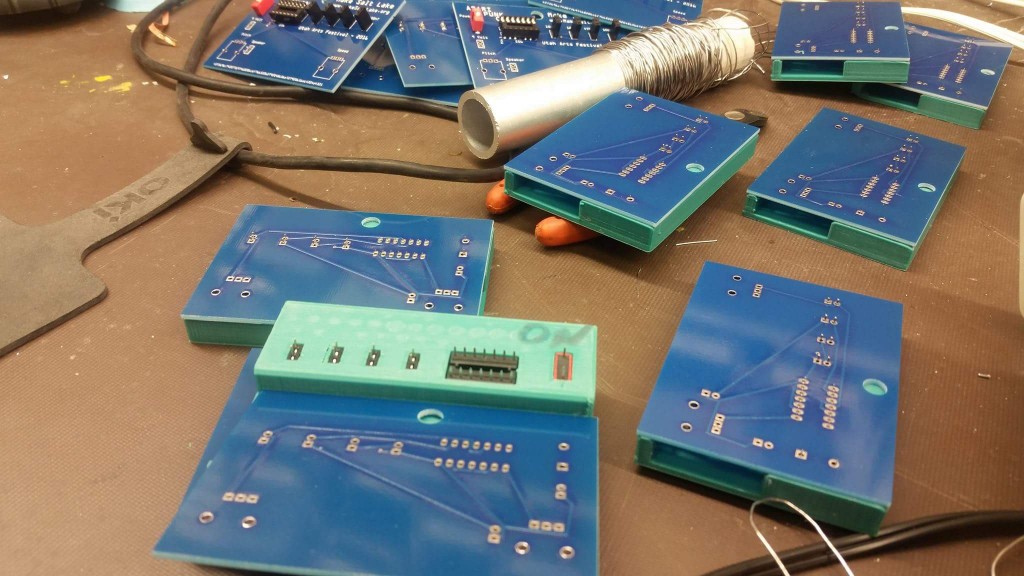 The Art and Technology venue becomes a full-fledged program at this year’s festival after two years of activities that have brought in participants in larger numbers than organizers had anticipated.

Volunteers have spent months preparing activities which will allow participants to make one of 5,400 items — 1,300 Brush Bots; 1,100 light sabers; 600 Atari punk synth consoles; 2,400 cyanotype prints — all of which they can take home. In addition, they have planned enough supplies for making thousands of customized art tiles. Last year, festival visitors made more than 2,200 art tiles. “I’ll make sure we have enough to meet all the demand this year,” says Henry Haskell, venue coordinator and member of Make Salt Lake.

The make-and-take objects are ingenious in their elegant application of simple yet significant technology. And, the material cost per object ranges from 50 cents to less than $3 (at no additional cost to participants). 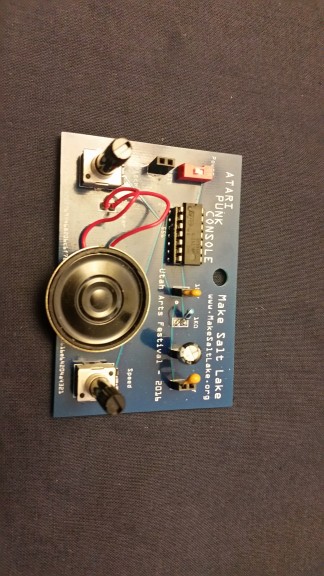 The Atari Punk Console builds upon the concept of a 555 simple timer silicon chip widely used more than 30 years ago in a basic music synthesizer. Haskell and his colleagues, including J.C. Carruthers who assisted on the circuit design, have built these tiny synthesizer consoles with a 556 timer chip that includes a pair of 555 timers. The first 555 timer operates like an oscillator, which generates a square wave signal while the second can put out a high pulse in which the length can be manipulated.

There is enough sound and variety of noise that one can make and play music on the tiny console. “Building small circuits like this one is a great way to experiment with electronics and in this case music as well,” says Haskell, who adds that he learned to make circuit boards for this project. He says the original circuit design for using two timers in a music synthesizer was published by Forest M. Mims III in 1980 in a Radio Shack booklet titled “Engineer’s Notebook: Integrated Circuit Applications” where he called the circuit a “sound synthesizer”.

The Synthphonics, comprising Jamie Backman, Kate Lloyd and Debi Graham, will perform on the Atari Punk Consoles, demonstrating how to leverage the full musical effect from these tiny devices. 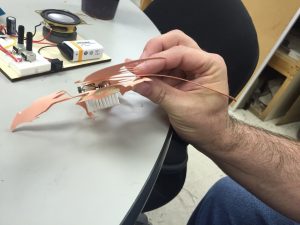 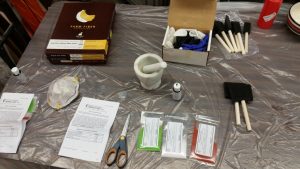 The Brush Bots are tiny skittering robots with simple working parts that are simply a toothbrush head, motor and battery. Participants can select their own cutouts from an array of animal shapes including dragon, octopus, dog, cow, scorpion and fly. Haskell says that Make Salt Lake located a janitorial supply source to provide the toothbrush heads at just a nickel apiece.

Another new item is cyanotype printing, which actually represents a photographic print process technology discovered in the mid-19th century and was widely used well into the 20th century for reproducing notes and architectural diagrams such as those in blueprints. Many contemporary artists have adapted the fairly inexpensive process which generates a cyan-blue print using two chemicals: ammonium iron (III) citrate and potassium ferricyanide.

Inspired by her studies in photography, Make Salt Lake member Michelle Ashton organized the project where participants will be able to make and take home a print on paper that has been coated and exposed to the sun. The biggest expense is the paper, which the crew is making on its own. 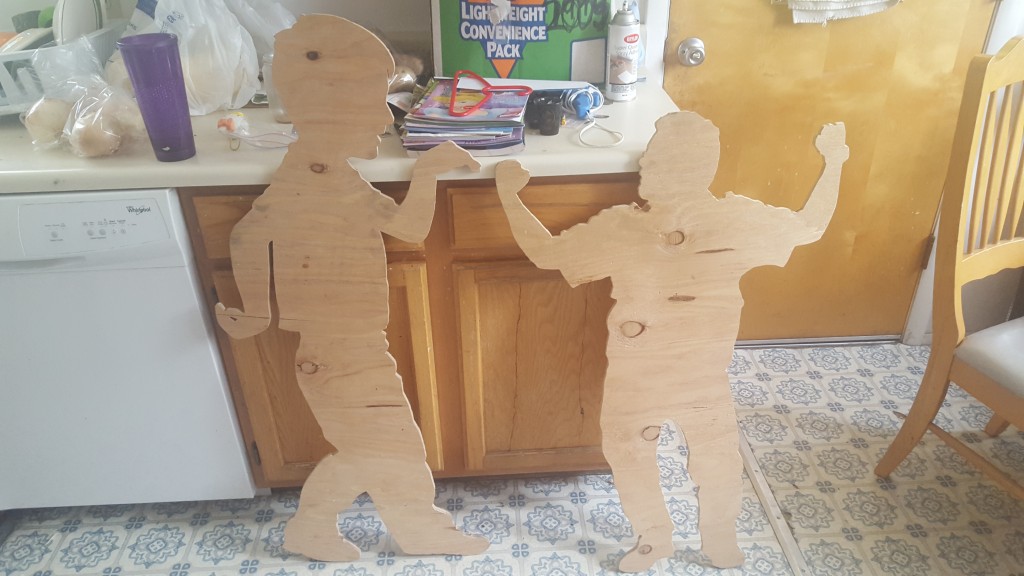 The miniature light sabers are back from last year but with improved capacity for bright nighttime color effects. The crew built battery holders and kids will add the battery, select the color of the LED crystal, decorate them and take them home. It’s a quick project that can be accomplished in minutes while offering a basic lesson in circuitry and how LEDs work.

ProVolt members will produce silhouette creations from photos captured on a green screen and cut on the Cricut cutter.

Besides the extensive production operations, the venue has many interactive activities that cover a broad range of technological sophistication, from the basic to the jaw-dropping features of virtual technology that now has become feasible and reasonable both in use and cost for the consumer. One of the simplest examples yet one that kids will certainly enjoy is a pinball table that can be easily configured according to one’s preferences, designed by Beth Sallay. 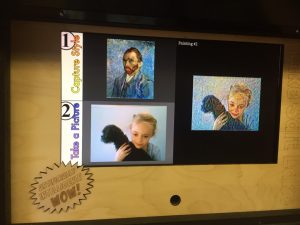 There will be the Artcade, an artificially intelligent painter designed by Duane Johnson that works like a photo booth in which participants can generate a unique painting image in 30 seconds. Johnson uses a deep learning algorithm called Neural Style that incorporates a large data set of classic images and styles and which has drastically reduced the processing time from previously one week to just 30 seconds.

The Sumobots are back this year as well, “bigger and more intelligent,” Haskell adds. With the benefit of Android tablets, Arduino controllers, and Bluetooth receivers, individuals will be able to reprogram one of four Sumo robots, which run on rechargeable lithium ion nine-volt batteries, before every battle. The exhibit, as Haskell explains, is a “great educational way to see how one easily could learn how to control robotic devices using a tablet.”

The drawing robot also is back for the third year in a row, this time sleeker and even better equipped to produce fairly well detailed line drawings that are easily recognizable as objects and figures — all artwork programmed by Make Salt Lake members. Visitors can take a printout of their choice as a memento. 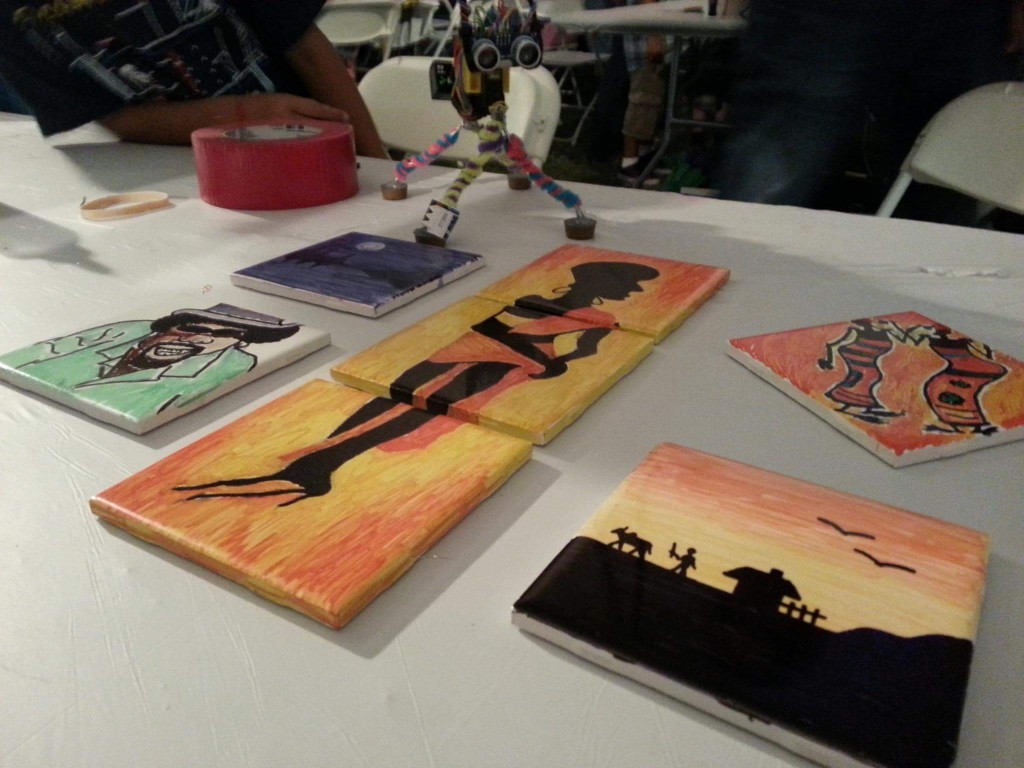 Participants can see just how easy it is to turn their smartphones into virtual reality viewed with Unofficial Cardboard‘s Google Cardboard 2.0+ kits. The California-based company has pioneered the incredibly simple and impressively low-cost kits that make virtual reality options workable with nearly every type of smartphone. The kits also offer an adjustable lens option to mitigate the effects of vertigo and motion sickness that might be experienced while using the Cardboard viewer.

There will be a magneto ferro liquid demonstration which uses magnetically charged fluid and electromagnets to make all sorts of shapes and movements on an interactive art piece. Visitors can see how wind chimes will react to anything that can be sensed and detected including WiFi technology. 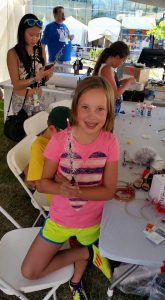 Even kids display their precocious technological talents. Samuel Drown, 11, wrote from scratch the code for a game similar to the classic Space Invaders genre for a Raspberry Pi 3.0 printed circuit board model. Meanwhile, his brother Tucker, 9, created a physical interface for the game.

Hook up a keyboard, mouse, monitor and a USB port to the model and one has essentially a low-cost microcomputer. And, at $35, it includes wireless internet connectivity which makes it a completely feasible option for maker enthusiasts.

For the most awe-inspiring impact, the venue will also provide daily demonstrations (6-11 p.m.) of immersive 3-D Art in a dedicated space under the crescent wall on Library Square, just to the east of the Art and Technology venue next to the Literary Arts’ Big Mouth Stage on the north plaza side of The Leonardo museum. 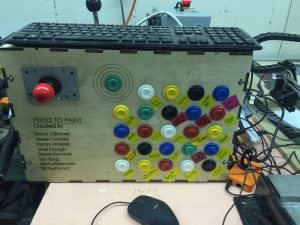 The holodeck of classic science fiction series such as Star Trek is manifested to convincing effect as the tools of the 3-D digital artist (a category certainly forthcoming in the future at the festival). Visitors can see the latest 3-D digital art of local creative producers which incorporates Tilt Brush, a truly mesmerizing creative sensory experience for the user who has digital paintbrushes, palettes, and a surprisingly diverse and versatile array of paint technique effects right on hand to create their own work in spatial canvases that then can be saved as an image file. Likewise, the emancipatory genius of graffiti art is explored even further with the Kingspray Graffiti Simulator.

Spy Hop also is a resident creator for the Art and Technology venue and this year as one of the nation’s top leaders in youth media and creative development, the organization’s me have come up with Exquisite Script in which festival visitors will contribute their own elements to a new film on each of the event’s four days. The premise follows the classic literary and poetry game Exquisite Corpse that harkens back to the Surrealist movement in Paris. In the game each person writes a word on paper, folds it, and passes it on to the next player for his or her contribution. The general sentence or narrative structure is established at the outset to avoid letting the flow head off in an absurd, ridiculous or irrelevant direction. The element of surprise though can lead to a completed story (or, in this case, a short film) that is entertaining and cogent in story arc. Samson says that the intent is to “do something collaborative that doesn’t involve a lot of preliminary instruction for visitors.”

For the festival, Josh Samson has assembled all of the elements for four films to be made, including script elements, costumes, puppets and sound. For example, users will have many background options to consider, including moon, sky, ocean, park, city, circus, office, room and stripes. The array of available props from different eras is equally versatile: science/technology elements, time machine, teddy bear, circus animals, large and small dogs, newspaper background, grand prize/medal, treadmill and phone. Costume options will include police uniforms, clown, elephant trainer and other circus performers. Other set elements include a black panel, apple boxes and a puppet stand. 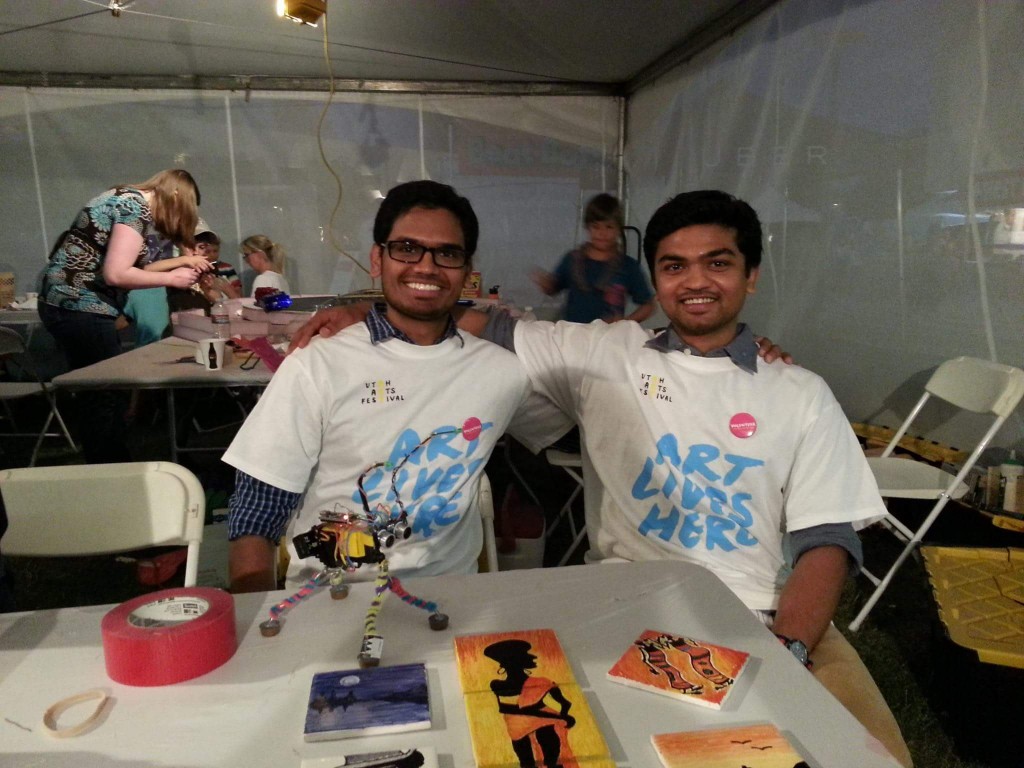 Each of the four stories will have a setup and then will include various structured narrative elements that allow enough space for surprising contributions from participants throughout the day. For example, on the festival’s opening day, the “Dog Walker” story features a person who can barely eke out a living but insists on remaining a dog walker because it brings so much enjoyable purpose. The second day’s story is “The Rocket Inventor,” about an aspiring creator who is seen as an unrealistic dreamer. It revolves around the challenges of how to redeem failure in demonstrating science and recognizing that sometimes the best science arises from mistakes. On the third day, Samson ramps up the stakes with “Always Time,” a basic story structure in a montage style about a directionless teenager who lazily spend the days in the pool or outdoors. The festival’s final day features “Clown Law,” where a case disputing the circus ownership is tied up in court.

The Art and Technology venue will be open each day during the festival from noon to 11 p.m.