In the day and age where everyone has an opinion and a Yelp account, few things are universally loved. On that shortlist: puppies, unicorns, bacon, and Caymus vineyards.

For wine geeks and wine posers, wine is as polarizing as geopolitics. But whether it’s an ample-nostriled sommelier or a drunken Napa wine trail blazer in a chauffeured Escalade, the consensus on Caymus vineyards offerings have always yielded a similar effect.

Let’s call it the Caymus Effect: Pop open the cork on the Cabernet. Sip. And say, “damn, that’s some good juice.”

The Caymus Effect has been around for a few decades now. Four, to be exact. It was way back when in 1971 when Charlie and Lorna Wagner joined forces with their son Chuck to create one of California’s most iconic wineries. Charlie senior already had a reputation for growing and selling some of the best grapes in and around Rutherford. So why not, winemaking? Hey, Charlie and his wife were only 60 and 57 respectively. And if this didn’t pan out, Australia beckoned.

Chuck, then 19, had the same adventurous spirit – remember, the Napa wine scene was VERY different back then, no resorts, no tourism, just crazy folks who fermented some grape juice. And they did it well. And the Wagner family became some of the best. Chuck’s dad even graced the cover of Wine Spectator in 1987 with the headline “Best Damn Cabernet in California.”

This year, marks the release of their 2012 vintage – a damn fine year for Napa Valley wines in general (Mother Nature and the gods blessed the area with the climate ideal for fruit and therefore juice) and an especially good one for Caymus and the Wagner family.

It also happens to be their 40th harvest/vintage. A feat in the risky business of wine that has been lately funded by the likes of Hollywood blockbuster makers (Brangenlina are making French rosé. Really).

But it’s more than a commemorative label and special bottling. Chuck is calling this bottling his best wine. Ever. And the great Oz of wine himself, Robert Parker, seems to agree awarding the 40th Anniversary 2012 Cabernet 96 points (Relax, Tiger Moms, 96 in the Parker universe is pretty much a 100%).

So what’s the big deal? The wine is big and juicy. But this isn’t a sloppy sorority girl in a tight dress at the nightclub. This voluptuous wine has got some serious depth and structure – think Nigella in a sleeve covering Herve Leger dress – and smolders with rich dark chocolate, espresso, and sweet tobacco. It’s a Cabernet, and she’s still a bit of a tart balancing out the sexy character with plums, deep ripe cherries, and black currants.

You can get to know this one alone by the glass. In fact, you can be one of the first folks in Utah to taste the Caymus 40th Anniversary Cabernet tonight at BTG Wine Bar (63 W. 100 South, SLC) at 6:30p.m, along with four other wines from the Wagner Family wines (Belle Glos, Mer Soleil, Conundrum – did I mention this family is legit?) and food pairings for $50.

On June 4th, Fresco Italian Café (1513 S. 1500 East) is rolling out the charm and a special wine dinner menu designed around Wagner Family wines, including the 40th Anniversary Cabernet. If you want to get in on the patio dining action (it’s one of the best in the city), RSVP for Wednesday night ($50 food; $35 for wine).

Get it while you can, because along with puppies, bacon, and Caymus wine, another universally loved thing: a screaming good deal for some damn fine wine. 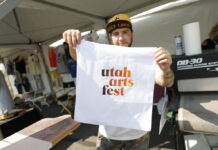