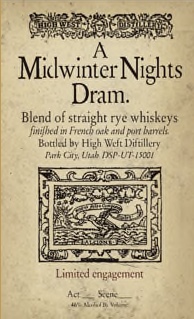 Merry wanderers of the night, take heed! High West Distillery & Saloon, Park City’s award-winning, ski-in gastro-distillery, is proud to announce the release of its latest spirit, A Midwinter Night’s Dram™. Named after Shakespeare’s comedy about love “A Midsummer Night’s Dream,” the newest whiskey will debut on Valentine’s Day just in time to help keep you warm through the rest of the winter.

“The rye forms a beautiful vanilla, caramel and cinnamon base, the port barrels add plums and dried fruits, and the French Oak adds a spice accent,” High West proprietor David Perkins said. “It tastes like a proper Christmas plum pudding with lovely mulling spices, dried fruits and crème Anglaise. We knew this was just perfect in the middle of a long cold winter.”

A Midwinter Night’s Dram™ joins 11 other award-winning High West spirits. Bottled at 98.6 proof so it goes in at body temperature and priced at $79.99 per bottle, it will go on sale in the High West Saloon and General Store in downtown Park City on February 14, and in liquor stores nationwide in October in time for next Winter.

“Whiskey is an indispensable part of making it through a long, cold winter,” Perkins said. “In ‘A Midsummer Night’s Dream,’ Lysander describes how quickly true love can vanish. We feel the same about a dram of our new whiskey. But rest assured, if you savor it slowly, we can attest that A Midwinter Night’s Dram™ will help you through the coldest night.” 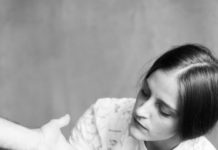 Immersive dance-theater show set for The Chocolate Conspiracy as SONDERimmersive will open Thank You Theobromine Nov. 15 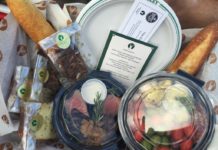