One of the most impressive scenes in The Ice Front, the Eric Samuelsen play in a world premiere Plan-B Theatre production, comes in the second act, where the five actors, stage manager and assistant manager have assembled at a restaurant. Shortly before this scene, Morten, the Nazi collaborator who is running the Norwegian national theater, told Birgit, the stage manager, that no sabotage would prevent the premiere of The Last Scream, a horrendously anti-Semitic play, from occurring. Morten says, “I should have you shot. I should have all of you shot.”

The actors learn of the occupiers’ accommodating gesture to stage plays that would enhance their careers. Bente, says, “And after we burn it down, our cast are all getting decent roles in the next season.” Earlier, the actors committed arson to thwart the play from proceeding and one of the actors, Egil, deliberately broke his foot. Nevertheless, they realize, if they yet do not understand fully why, that the authorities need them to proceed with the premiere.

And, then, Peter, who normally plays leading man roles, says, “We could act badly on purpose. We could sabotage the play, and limit its propaganda value to the degree that we can. That’s risky, very dangerous. We very well could be killed. But it remains a possibility.”

Still trying to sort out why the authorities insist on making the play happen, Birgit worries about becoming a “victim of circumstance,” adding, “I don’t want events to control us; I’m a stage manager. We want to make things happen.” Eventually, the actors vote 4-1 in proceeding with The Last Scream by following the tenth and most consequential commandment of the Resistance: “If you absolutely must work for Germans or quislings, you will work badly.”

It is a magnificently acted sequence in a production that will be one of the most memorable in Plan-B’s history. The Ice Front, directed with such astute recognition of historical integrity by Jerry Rapier, is one of those rare clarifying gems of theater that moves backward into under-explored territory of a widely studied historical period to gain a better understanding of how the world experienced the genocide which was the Holocaust. How could we fathom the idea of ordinary individuals allowing such events to occur? How could they ever live with their conscience after the fact?

These questions are explored extensively in The Ice Front. The play also is acutely relevant now. Today, there are many who profess a sanctimonious conscience in their conflated, misinformed sense of justice and history. They would rather dabble in gray areas. There are, for example, the defenders of Confederate monuments who see the Confederacy as honorable in its efforts because they insist on erroneous historical accounts suggesting the Civil War happened only when efforts failed to achieve a compromise on slavery. And, even more concerning, there is the white nationalist movement eagerly appropriating symbols and slogans of the original Nazi movement. The problem is that in the 1930s, no one really knew just where the rallies and parades were leading.

Samuelsen’s The Ice Front compels us to learn from the experience of ordinary Norwegians and to be clear minded, keen and vigilant as ever. We should interrogate our own narratives along with our command and understanding of historical facts against the expressions of intolerance, hatred, discrimination and bigotry that always are the most accurate warning signs in history. In writing The Ice Front, Samuelsen meticulously has cross-examined his own narratives and facts, which came from the wartime experiences of his family, his research for his dissertation on Norwegian theater and his own lifetime work with the inner workings and culture of the theatrical world. He infuses the play with historical accuracy and integrity but never allows it to overwhelm the essential emotional tensions of drama that maximize the value of a three-dimensional understanding of human conscience and the choices we face. He strikes a solid, credible balance for the right thematic purpose.

It is Samuelsen’s never-wavering ring of authenticity that drives the momentum of The Ice Front, which features the largest cast ever (nine actors) and among the longest plays in Plan-B’s 27-year history. The opening night performance already was taut and crisp in its pacing.

Stephanie Howell brings such natural ease to the role of Birgit, the stage manager. She augments a thoroughly persuasive performance with such a subtle evolution of body language and nonverbal expression, as she gradually assumes the central catalyzing role in orchestrating this daring act of Resistance. Other performances – Daniel Beecher (Peter), Ariana Broumas Farber (Mette), Jay Perry (Egil), Robert Scott Smith (Anders), Emile Starr (Bente) and Christy Summerhays (Astrid) – accentuate beautifully that singular experience of ensemble work in which the characters start at different points in their sentiments about the Resistance but ultimately unify themselves for the climactic point.

Likewise, the two actors portraying the full-fledged collaborators – Mark Fossen (Morten) and Topher Rasmussen (Heinrich) – give such convincing yet understated performances as complex humans who are intensely flawed, tragically misguided and undeniably guilty. Rasmussen’s character as a soldier is strangely poignant. The young man’s love and knowledge of his homeland’s theatrical legacy are glimpsed occasionally. One wonders momentarily if he will switch and join the Resistance but it never happens. Indeed, after the war, if one was not executed for collaborating with the enemy, there would be the inevitable lifetime of shame and embarrassment and the indelible stain of unforgivable moral corruption. No one escapes history untouched or unscathed.

For 30 years, Samuelsen thought about writing a play based on the historical details he discovered while researching his dissertation. Then, as noted earlier in a preview at The Utah Review, he had become fully absorbed with his life as a playwright, scholar and university professor. But, his father, Roy Samuelsen, who died earlier this year and to whom The Ice Front is dedicated, never gave up on encouraging his son to bring this play forward to completion and production. Samuelsen’s grandfather knew first-hand the moral significance and strategic value of The Ice Front rules and the brave risks many took, knowing Resistance was the only morally correct thing to do. His uncle was a war hero who received among the highest honors of the Norwegian military. But, even some of those courageous men and women involved in the Resistance paid a deep price in terms of their physiological and cognitive well-being, as anger, alcoholism and untreated Post-Traumatic Stress Disorder would disrupt and consume their lives long after the war ended.

More than 70 years after the end of the Second World War and the full discovery of the Holocaust atrocities, there also are countless families and descendants who still wrestle with the silent embarrassment, knowing their grandparents, parents and other relatives did not perpetrate the genocidal horrors of the Holocaust but certainly enabled it as they tried to assimilate or collaborate for the purposes of continuing their routines of life and work.

Likewise, the performing arts world also became a convenient venue for propaganda purposes, especially in perpetuating some sense of normalcy, whatever that could be in such extraordinarily dysfunctional times. Many of these stories have not been told as effectively as they should be. Some four decades ago, Fania Fénelon’s autobiographical book about the female musicians who performed for their captors at the Auschwitz-Birkenau concentration camp in exchange for being spared from execution was made into a television film and a play by Arthur Miller. However, many of the musicians were heartbroken by the book and have disputed vehemently the author’s account, which has become a frequently cited source of Holocaust scholarship. There are efforts to bring forward the authentic stories. Published last year, Susan Eischeid’s book The Truth about Fania Fenelon and the Women’s Orchestra of Auschwitz-Birkenau (Palgrave Macmillan) addresses the complications of remembering such events in media and entertainment culture and the use of autobiographical accounts as reliable source materials for historical research. Eischeid included interviews with the women who challenged Fénelon’s account.

This directs us to appreciating The Ice Front‘s value on an expanded basis. Samuelsen’s reputation as a scholar and as a playwright always has been framed within the expectations of moral conscience and integrity and how they are expressed with the cherished precision of language. This informs the choice of a fictional character such as Birgit, which energizes The Ice Front and boosts the play’s value as a newcomer in the storytelling canon of the Resistance movements in World War II. There already are many films, books and documentaries that tread upon the familiar paths of history – the profound ugliness and heartbreak Holocaust victims endured under the uncompromisingly evil rule of their captors. And, there are the accounts of brave and historic Resistance fighters and underground rescuers. 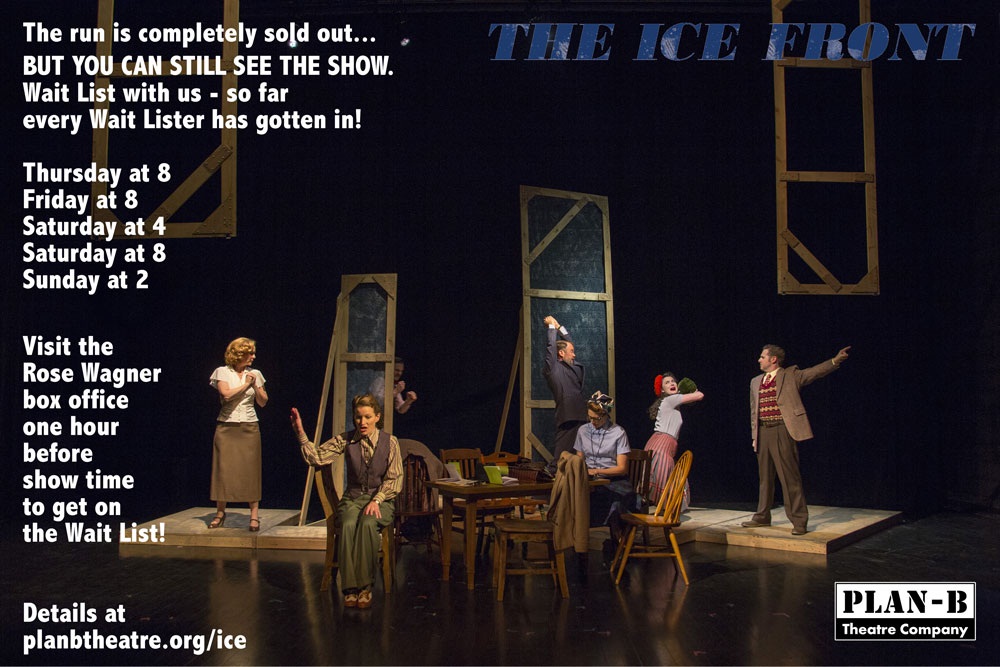 But what of the stories about ordinary individuals – the actors and professionals in a national theater in Oslo, for example – who variously fall along points on the spectrum between the protagonist victim and the antagonist villain. Again, as Birgit mentions, “I don’t like this, being a victim of circumstance.” In The Ice Front, Birgit and the other characters vividly demonstrate what it must have been like for ordinary Norwegians to endure that period of history. Late in the play, they begin to comprehend the dynamics of history’s critical judgment and the hope that they will be forgiven. Plan-B’s production interprets exquisitely Samuelsen’s sensitive, intelligent, wise appeal for the vigilance we need to confront our most painful histories. Its contemporary relevance always will be urgent.

The run is sold out but wait lists for tickets are available for the five remaining shows, presented in the Studio Theatre of the Rose Wagner Center for Performing Arts. See Plan-B’s website for more details.