I’m very fond of telling people that Salt Lake City is the next Portland. If you know me in person, I’ve probably bored you with this notion to the point you’ve now actually moved there to escape my rambling. I am a local foodie Cliff Clavin.

Our food and beverage movement in SLC seems to change up gears on an almost monthly basis right now. Its an exciting period, with newcomers arriving on the the scene all the time and long time stalwarts re-inventing themselves. Over the past few years Naked Fish Japanese Bistro has been quietly undergoing something of a revolution and dare I say it, now ranks as my favorite restaurant in Salt Lake City. As a well known malcontent, that’s high praise.

Tell someone from outside of Utah that SLC is awash with oceans of sushi and you’re likely to be met with several responses:

What, Salt Lake City has restaurants?

“I’m from city X next to body of water Y, and I know sushi, pah”

Note: that last one is usually Californians with a firmly held belief that proximity to an ocean means de facto access to an all encompassing abundance of things that swim.

Even within SLC itself, mention Japanese cuisine, and the talk can quickly devolve. People segue directly from debating restaurant fish freshness before lauding the merits of a particular deep fried roll. Others will sagely advise on value, and point to all you can eat signs; sushi ranks highly on a personal list of mine with parachutes, hand grenades and surgeons – where I look for quality more than quantity. But each to their own.

That said, if you’re a maki monster Naked Fish will happily oblige, try a Tengu Roll for example, it is as meticulously crafted as it is delicious ($13.95, shrimp tempura, avocado, spicy crab salad, tuna, tobiko, spicy aioli and tare): 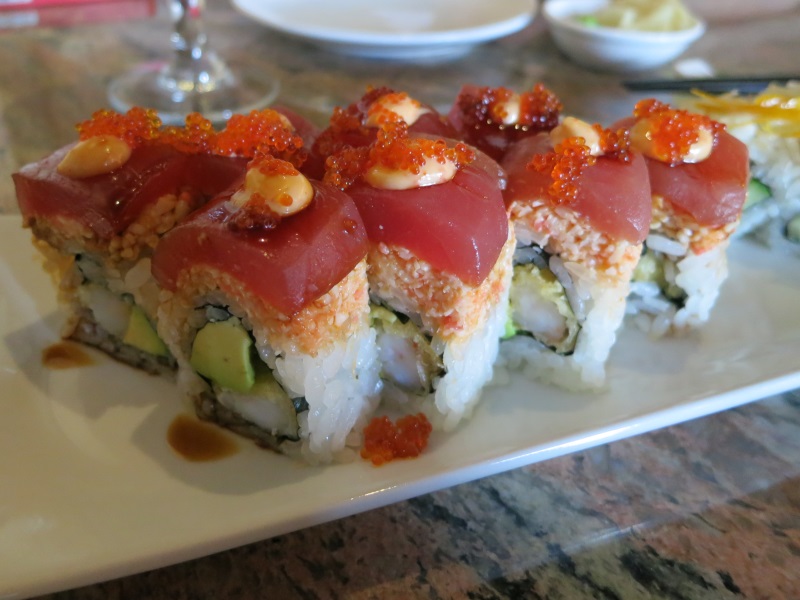 But Naked Fish Japanese Bistro is about so much more than maki rolls, (side note: the restaurant doesn’t even serve sushi at lunch these days). At Naked Fish the flashy rolls are really just the salesman’s foot in the door – allowing him to pitch the depth and breadth of his products, and I implore you to hear him out.

I mean, where else in SLC can you get yakitori grilled beef tongue alongside first rate tempura (shiso leaf pictured). Or even a prawn, live moments before served, still twitching while plated. Eat the raw tail before sending the head to be instantly flash fried: 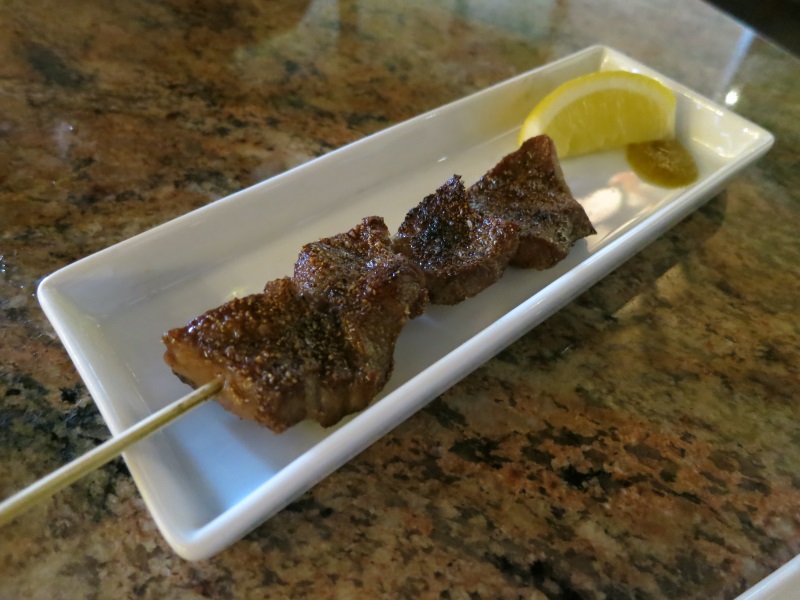 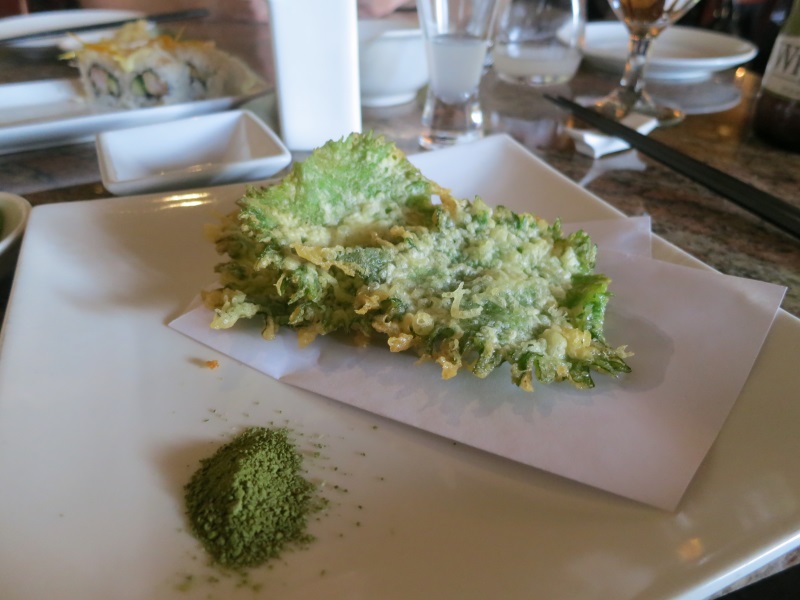 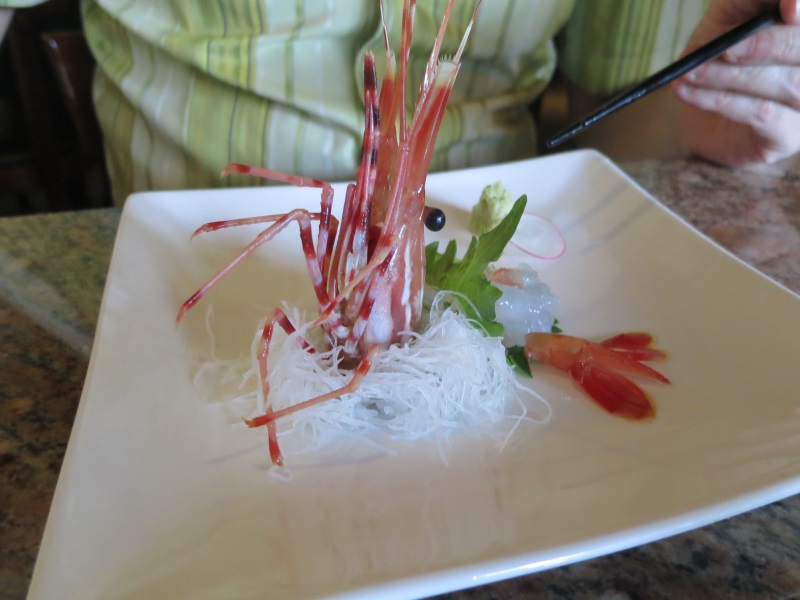 There’s an obsessive focus on quality, bordering on the gleefully lunatic, which stems from owner Johnny Kwon. In an interview with Kwon last year he excitedly explained how chef de cuisine Toshio Sekikawa questioned the use of expensive Koshihikari rice – why bother, would anyone even notice? – Kwon’s response? “I’d notice”.

If you dig beneath the surface at Naked Fish you’ll see this maniacal enthusiasm for excellence over and over; from the smooth burning Binchotan charcoal that fuels the yakitori grill, to the litany of science geek kitchen gadgetry out back through to the investment in the heart of the restaurant: the team.

General manager Christian Frech is level 2 certified sommelier, executive sushi chef Sunny Tsogbadrakh is a level one sommelier *AND* a certified sake professional. Sous chef David Hopps is another level one sommelier and the restaurant relies on routine education and guidance from Francis Fecteau’s Libation. Kwon is BFF with local celebrichef Viet Pham, who even guested in the kitchen this year for a super special valentines day dinner.

Spend ten minutes talking to the infectiously charming Kwon and you’d imagine he’d happily crash a wrecking ball through the joint and rebuild it by hand if it meant he could wring out an extra few percentile points of perfection.

The culmination of all of these elements is the omakase – the set course sushi counter experience, built just for you. Technically speaking, the multi course meal at Naked Fish is more delicate Kaiseki than straight up omakase but whatever you call it – I am not aware of any better *complete* fine dining experience in SLC right now.

First a few stats. The Naked Fish Japanese Bistro omakase is $65.00 per person. A ridiculously small value considering a bone-in something will cost you close to that from a nearby steak house. Each meal requires 48 hours advance notice, as the chefs quite literally shop and craft the experience just for you. You’ll want to dine earlier than later, before the restaurant gets busy – so you can spend time rummaging through your chefs brain (likely chef Sunny). An optional wine and sake pairing (detailed below) is a measly $35 more.

Our omakase experience began with a three part amuse bouche, prepped by chef Sunny. Firefly Squid in yuzu, Mozuku (seaweed) with house blended vinegar and Kumamoto Oyster with ponzu. More full on appetizer than bite sized intro. For those who might find squids and oysters less than appealing (I’ve heard you folks do exist) the unique omakase experience can be individually tailored to most preferences.

Next on the agenda, a selection of handsomely plated sashimi. Our selection included Maguro, Hamachi Hirami, Sake Hirami, Hirame, Tai and Uni from Santa Barbara (which is standard on the omakase if in season and the quality is up to muster). While Kwon explained to me he shies away from proclaiming Naked Fish an outright sustainably focused eatery – it’s clear there’s careful consideration over what makes it to the plate. You’re as unlikely to see something on the verge of extinction here, as you will an attempt to pass of a fish like swai as The Next Great Thing (TM). 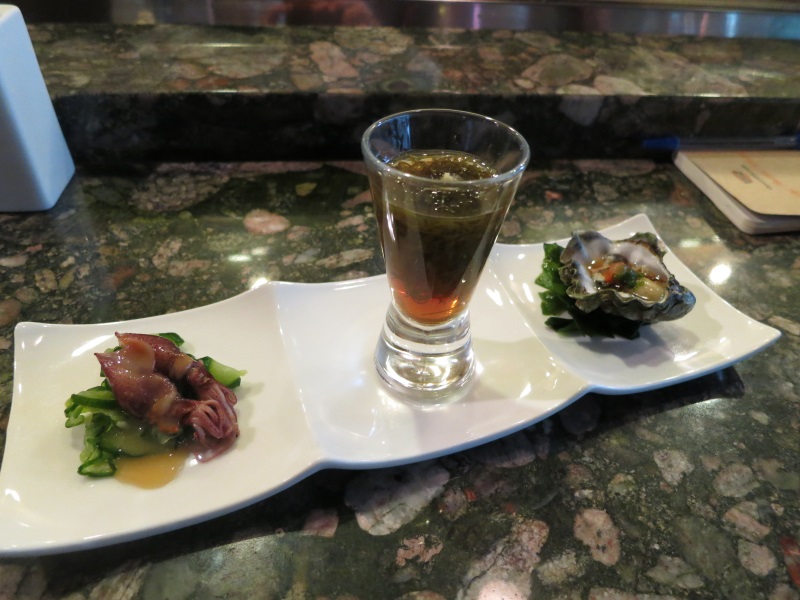 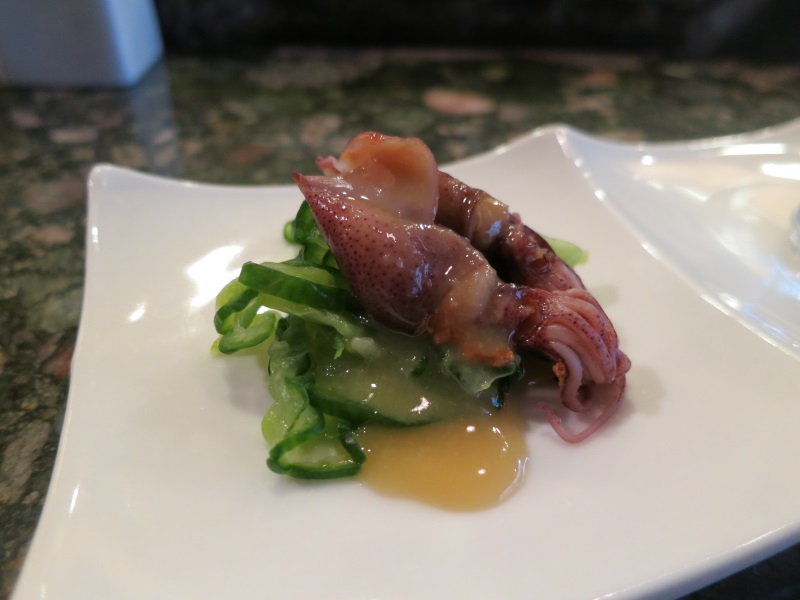 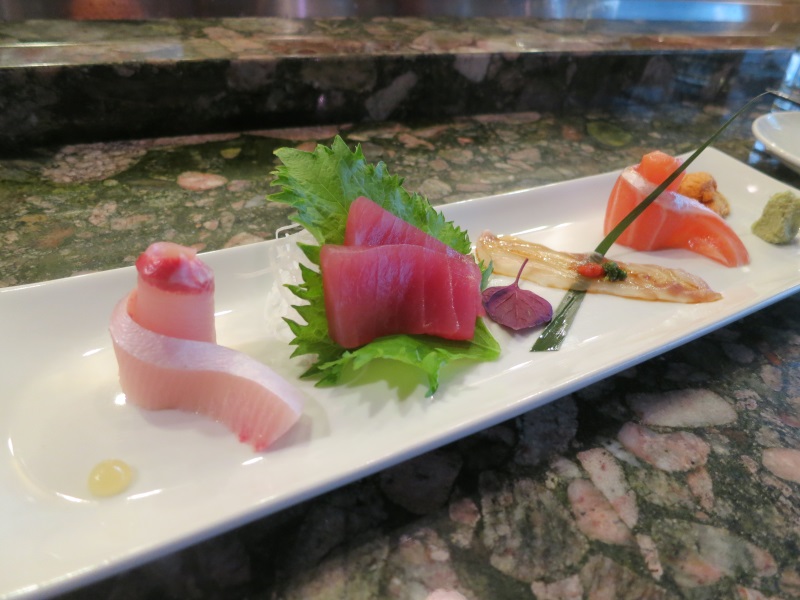 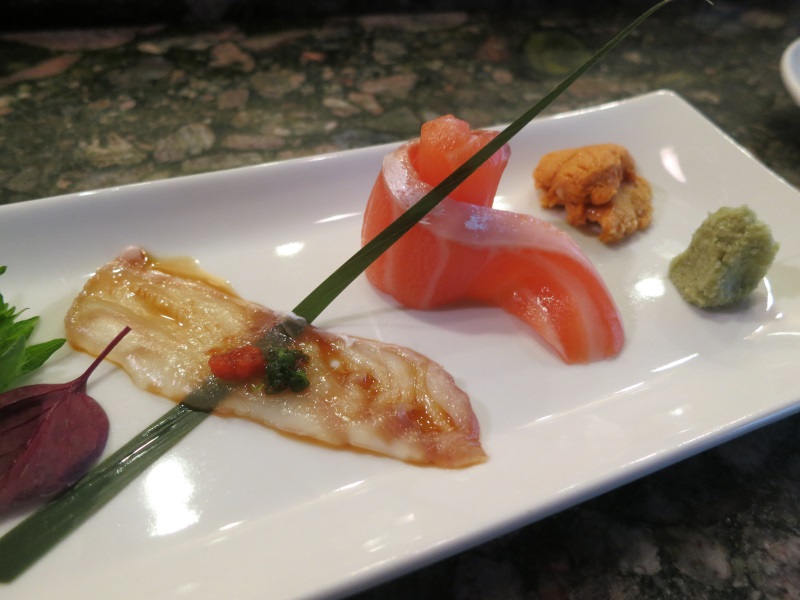 Hotatagai (scallop) with squid ink, koshihikari rice and mustard seed was the first dish from the kitchen. Subtle and gentle and graceful. If you’re not a scallop fan – this might be the dish that makes you see sense, because seriously, who doesn’t like creamy, melting goodness.

Following on, a preparation of Idaho trout with sake sabayon, ikura and shimeji mushrooms was mesmerizing. If you were served this in one of SLC’s fancier restaurants, you wouldn’t be upset dishing out twenty bucks or more. Remember kids, this is just one element of a sixty five dollar menu. 65. 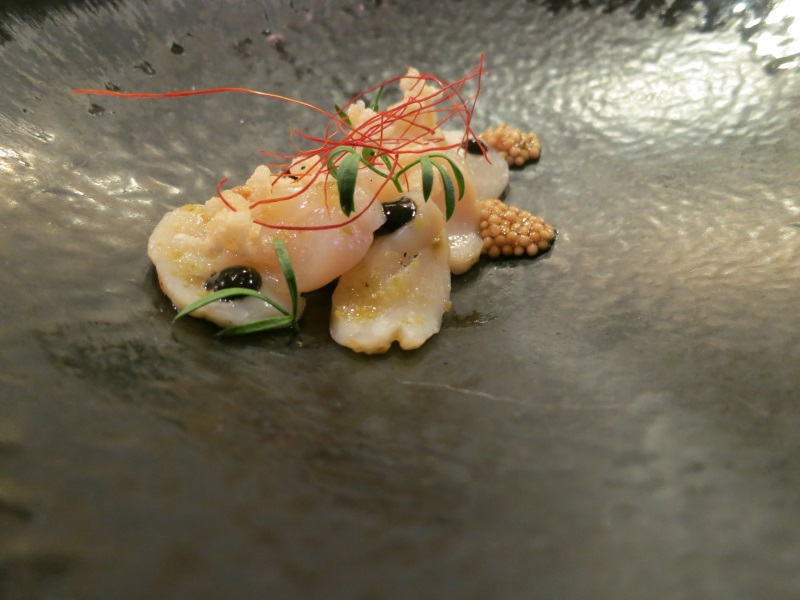 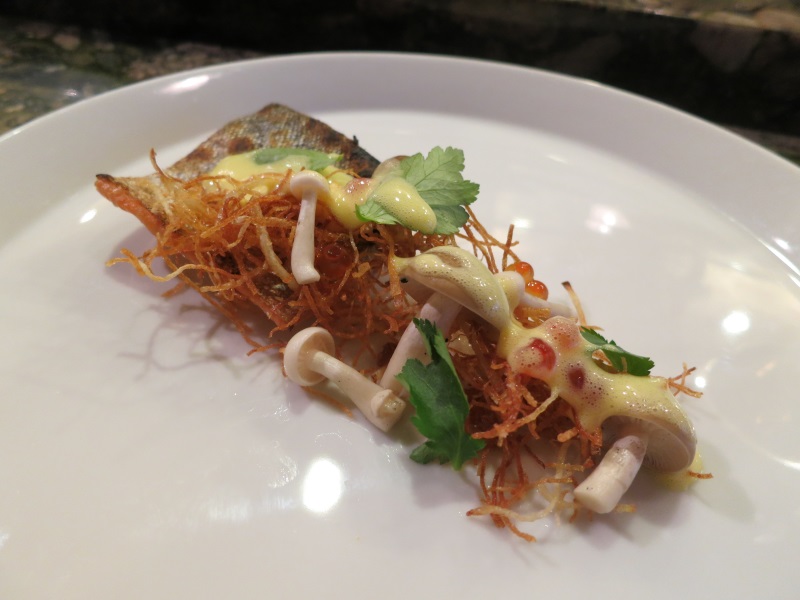 A slab of Kurobuta pork belly with black radish, umeboshi and leeks was the next dish from the kitchen, but the following Kohitsuji blew my mind. Served with kabocha squash, beet and brussel sprouts this was easily a contender for the singular best piece of lamb I’ve eaten in Utah, full stop. Take a look at that rosy pink close up, then imagine me dreamily gazing at that in person for about 5 minutes, too enamored to do anything but flutter my eyelashes. Yeah, that weirdo you saw at the sushi bar, that was me. 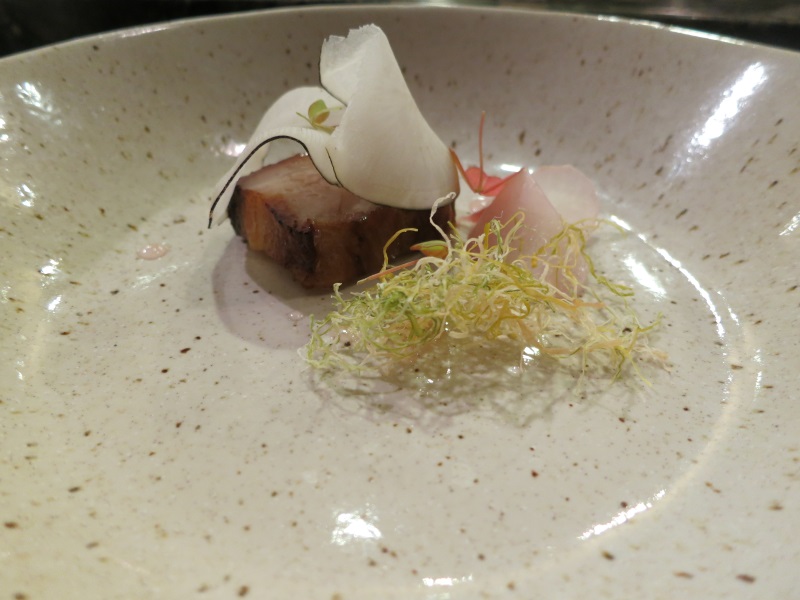 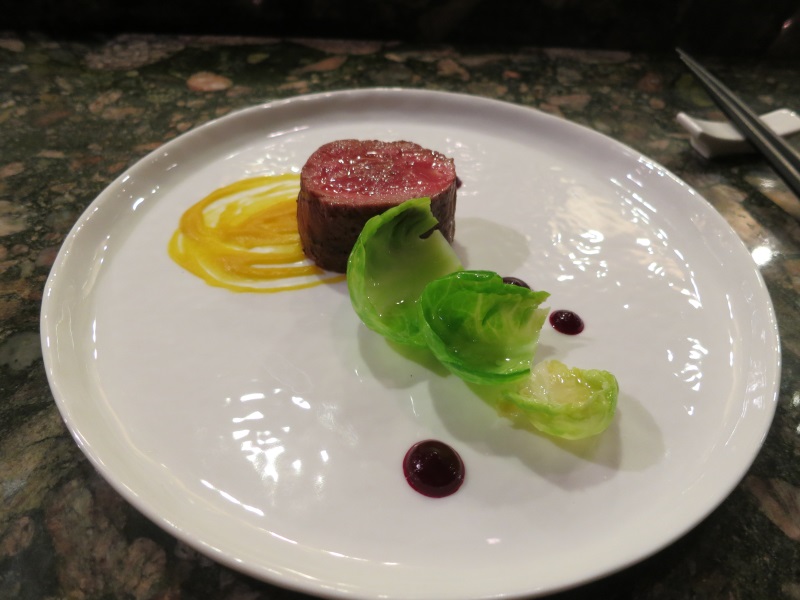 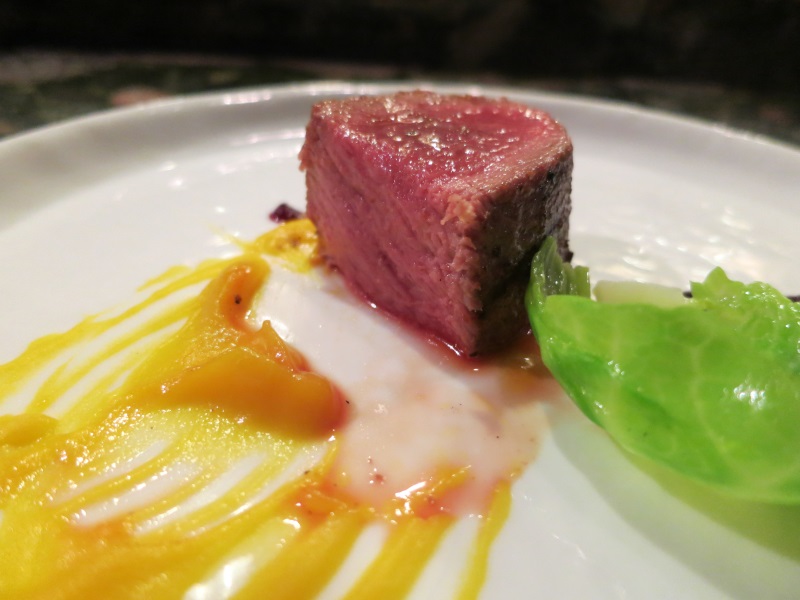 For $25 extra, you may add an optional additional course to the meal – Miyazaki A4 beef. Let me rephrase that for you. You must order this extra. This is the real deal, the coveted imported Japanese beef – so prized it even comes with its own certificate of authenticity with nose print. This is not the stuff you find in many a “Kobe Dog” or “Wagyu Burger” that leaves you shaking a fist at shyster marketers. This is marbled, creamy heaven.

The exact preparation changes with each omakase. During our meal the beef was served shabu shabu style with warm kelp broth and topped with pretty mustard blossoms. Eat raw or after a dip in the broth – whatever you choose, you’ll probably find yourself scrambling through your wallet for another twenty five bucks, like some addled addict. After tasting this, the next time you see an eight dollar kobe dog, you’ll probably lob a brick through the proprietors window in affront (note: please don’t do that). 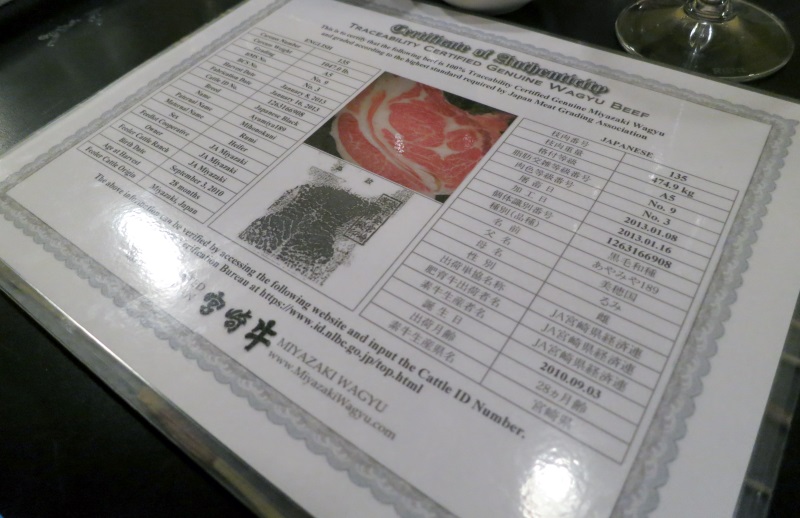 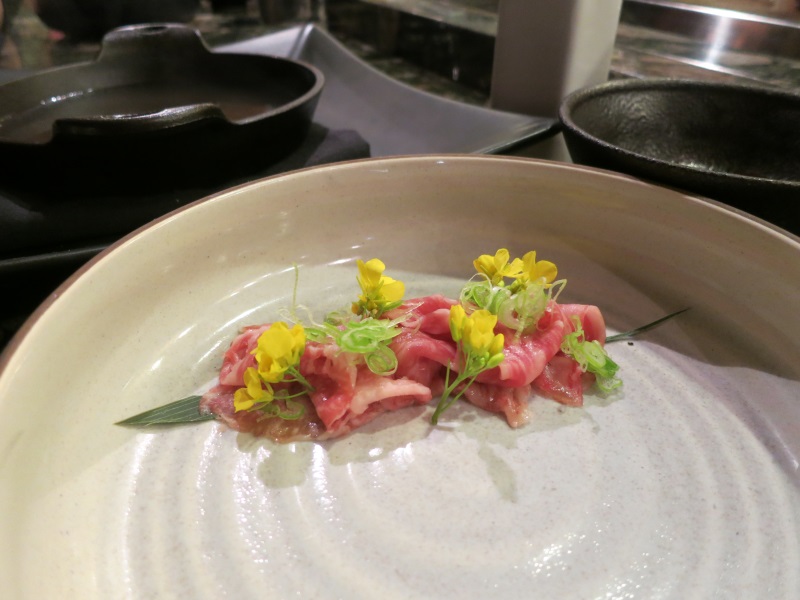 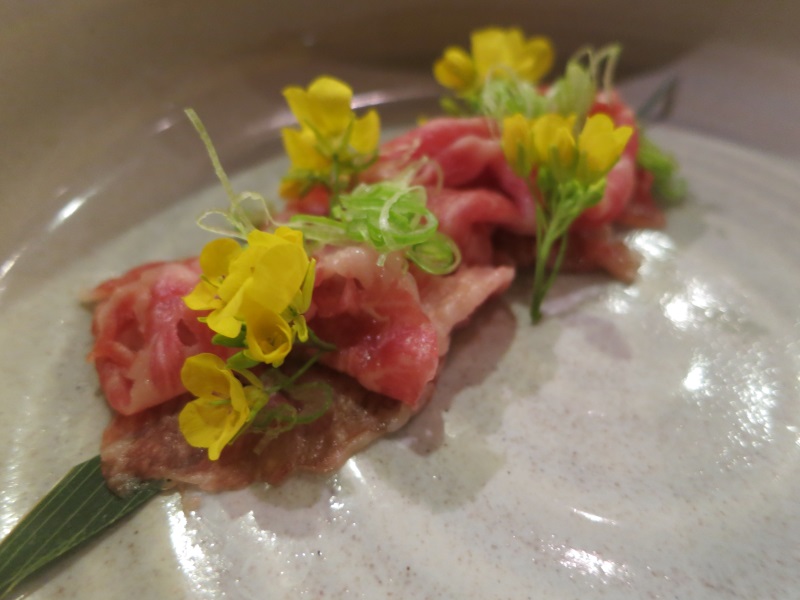 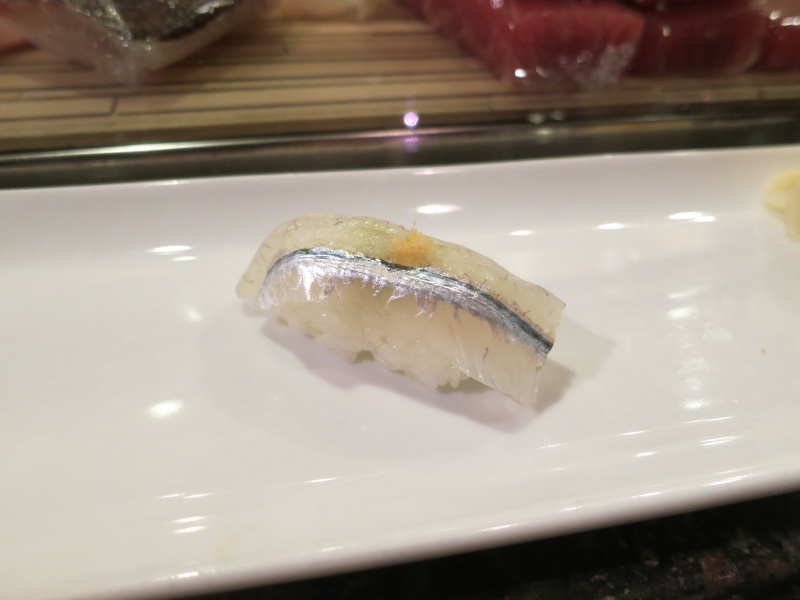 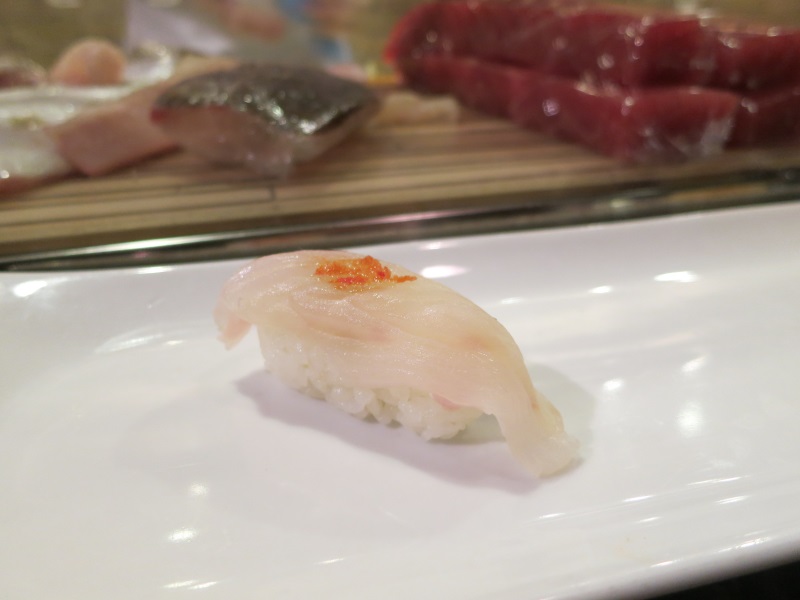 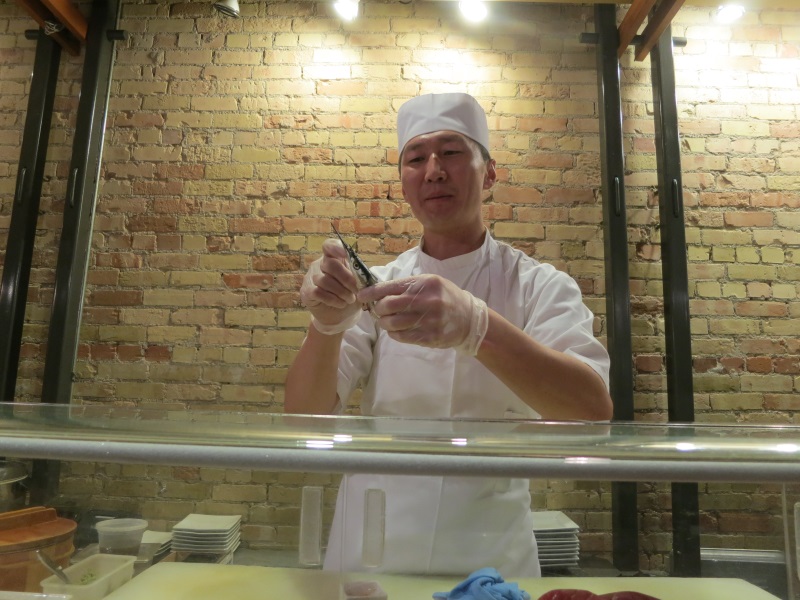 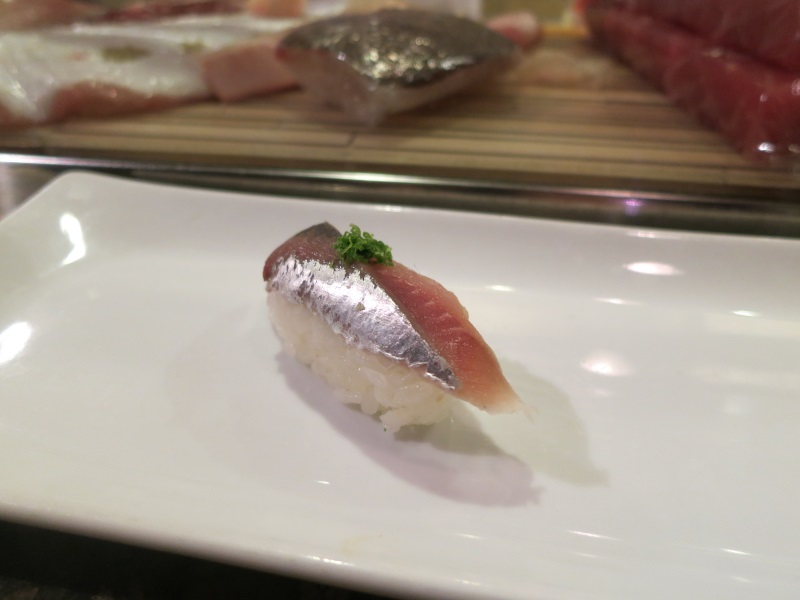 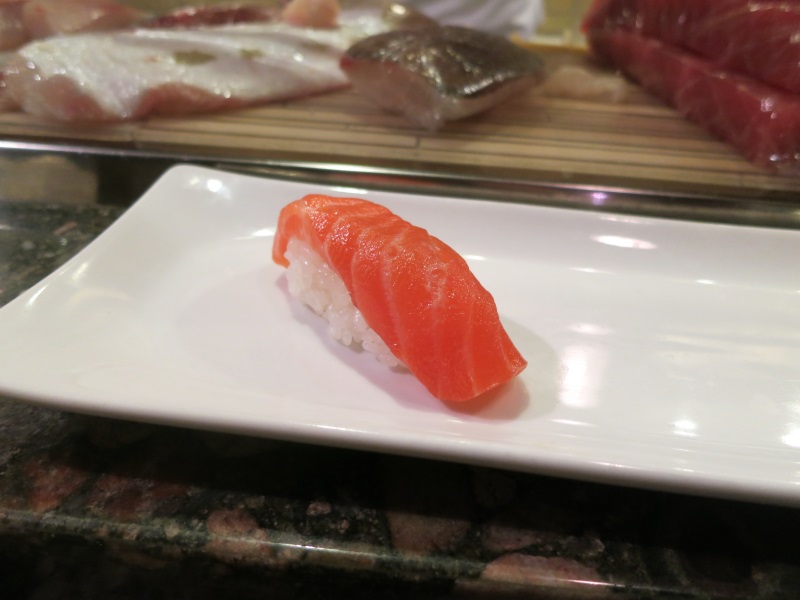 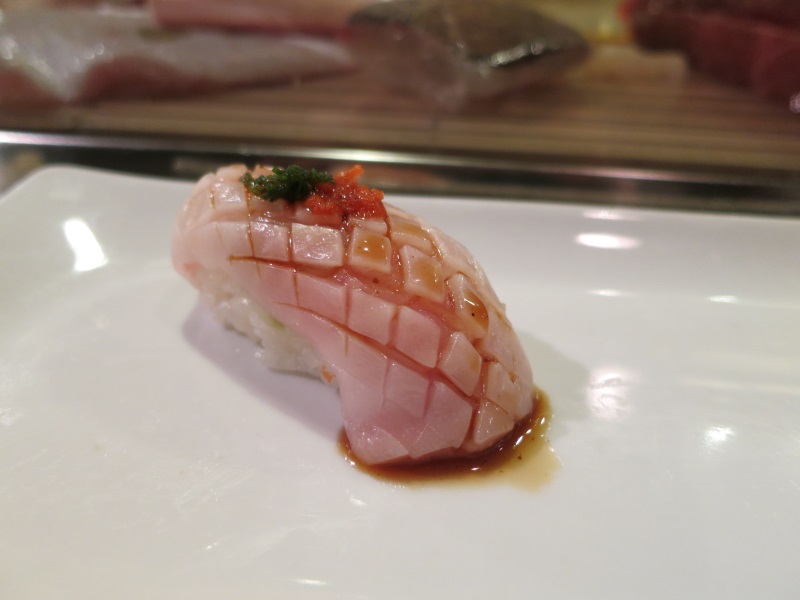 A quick citrus sorbet served as an interlude before the final delightful note of the evening. Lemon meringue was made using a Paco Jet device, frozen, torched and served with an almond crumble. A final reminder that Naked Fish isn’t your run of the mill Japanese restaurant. If everything dedicated pastry chef Elyse Osguthorphe creates is this sublime, people will be stopping by for dessert as much as anything else. 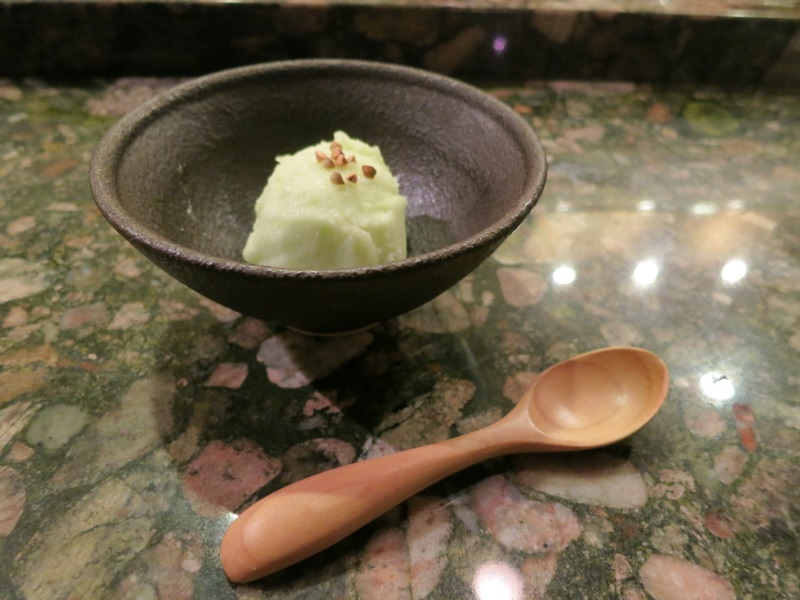 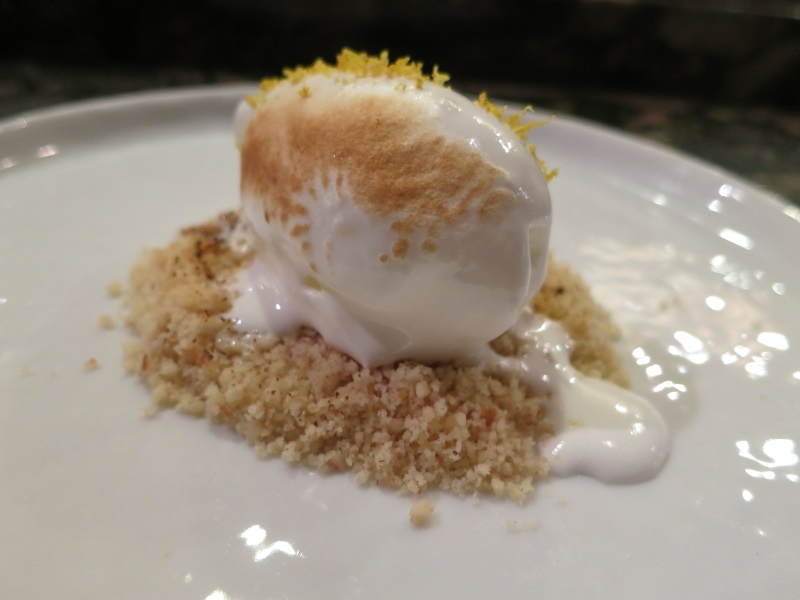 As you might expect from a restaurant with three qualified sommeliers on staff, pairings for the meal were carefully selected. Each was served up by the engaging Frech. At $35 the pairing was as much of a steal of a deal as the food. Our pairings proceeded as follows – tasting notes courtesy of Frech:

Without risking gushing further, each was an impeccable match to a meal that will long linger in my mind. I’ve spent double this amount of money in other supposed foodie cities, for meals only half the quality. In fact, maybe I’ll stop crowing about SLC being the next hip-hangout for those in the know. I’m fine with gems like Naked Fish being our little ‘in the know’ secret, so we can get a table without a six month wait.

Keep an eye on these guys, there’s magic going on here, which I can only see accelerating like the general SLC food scene.

Disclosure: I paid for several meals myself during the course of writing this piece, but the omakase was comped by the restaurant.