One of the most popular programming approaches to highlight the string quartet’s extraordinary versatility as a chamber music ensemble is to organize cycles of a particular composer’s output in the genre or to juxtapose a series that emphasize parallels between how two composers developed their musical language for string players. The case is strong for the string quartet as one of the most consequential crucibles for musical revolution.

For its first Gallery Series concert of the 2018-19 season, NOVA Chamber Music Series takes a novel approach – cover nearly a millennium’s history of musical development in 75 minutes featuring excerpts from works written originally for string quartet or those that can be arranged for four instruments. R/Evolution: A Millennium of Musical Mavericks came from Madeline Adkins, Utah Symphony’s concertmaster who is music director for NOVA’s 41st season. Among the various thematic threads in NOVA’s programming this year is an emphasis on works by women composers. R/Evolution opens and closes fittingly on that emphasis. 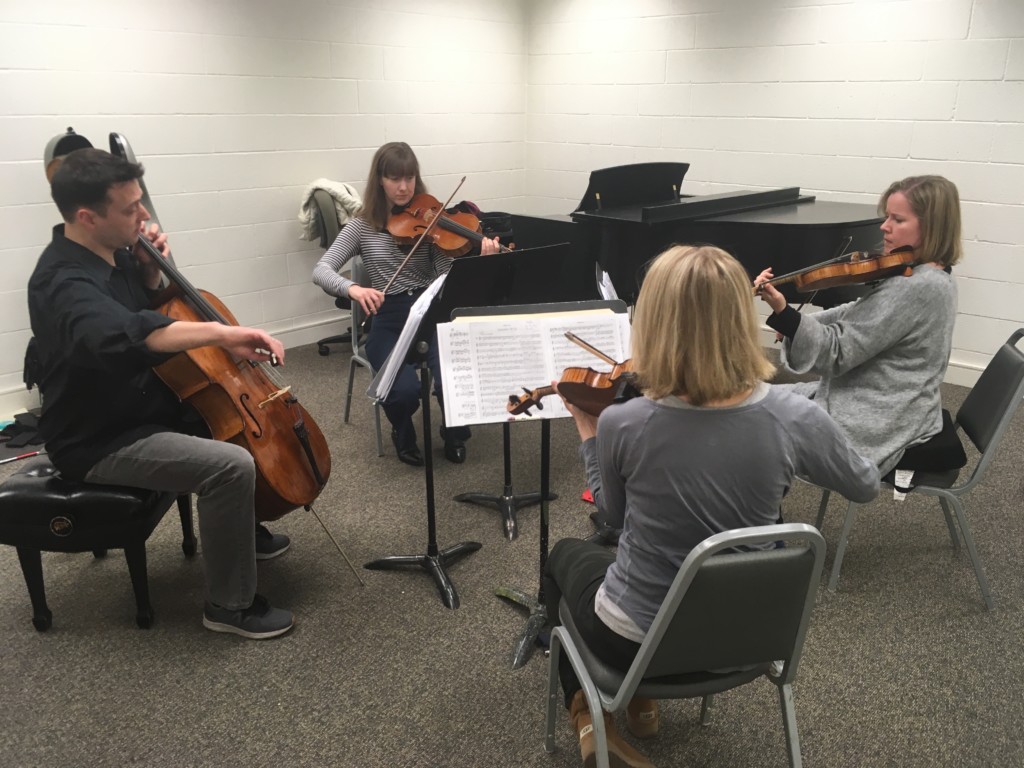 Adkins says in an interview with The Utah Review that she wants to accommodate an audience with “different levels of knowledge.” She adds that the experience is like a “food truck festival where everyone is invited to sample and enjoy everything.”

Opening the program is O virtus Sapientiæ (Oh Strength of Wisdom) (ca. 1175) by St. Hildegard of Bingen (1098-1197). Bingen was a Benedictine abbess whose ideals and creative work presage the foundations of the Renaissance. Music was only one of many interests that included science, theater, theology, medicine and mysticism. As The Utah Review noted in a 2017 preview of a play about her life written by Tim Stover and premiered by Plan-B Theatre, “Hildegard’s uncharacteristic yet astonishing life is a striking antidote to the Pauline admonishment from the fourth century that women should be silent in the ecclesiastical setting. Women in the Catholic Church were permitted to practice and develop their art and skill in music, science, philosophy and other realms of the late Middle Ages but in their own quarters and without necessarily the full stock of resources that their male counterparts enjoyed.” Stover said he was drawn to the melismatic character of her music, of which this selection demonstrates.

The next revolutionary step featured is Pur ti miro from L’incoronazione di Poppea (I Adore You from The Coronation of Poppea), composed in 1643. Claudio Monteverdi (1567-1643) was, as Alex Ross noted at The New Yorker, the Shakespeare of opera, a descriptor credited to British conductor John Eliot Gardiner. The six-minute aria is the climactic love duet of the opera, a form that Monteverdi demonstrated for its possibilities as an evening-long entertainment where the music augments the libretto to represent characters. The music falls naturally into four parts with the viola and cello taking the basso continuo lines of the lute and cello that were common for the period’s instrumental writing, while the violins take the two characters’ melodic lines.

Moving to the late Baroque period, the quartet plays the Contrapunctus 1 from Johann Sebastian Bach’s The Art of the Fugue, written ca. 1742. There is no meaningful challenge to Bach’s revolutionary status. Indeed, he synthesized a millennium’s worth of musical vocabularies and languages that preceded him. Like so much of his music, The Art of Fugue had a clear pedagogical purpose as he wanted to show all of the composing possibilities for this specific musical form. Bach wrote this work as an open score and he did not specify any instrumentation for it. The score indicates a line for each polyphonic voice. The first complete public performance of the work did not occur until 1922. Paul Henry Lang, the eminent musicologist from Hungary, wrote “each component of this work was to be painstakingly studied and slowly absorbed at home.”

At this point, the ensemble moves into the giants of the genre: Franz Joseph Haydn (1732-1809) with the magnificent opening movement of his String Quartet Opus 33, No. 3 also known as the “The Bird,” the gold standard of the quartet form, and the final movement of Beethoven’s (1770-1827) String Quartet No. 6 in B-flat major, Opus 18, No. 6. The Beethoven excerpt comes from an audacious experiment he pursued in his late twenties, in which the composer set the last movement — La Malinconia (1798) – by opening with a riveting adagio so intense that it overwhelms the ensuing cheerful allegretto finale.

Adkins connects the revolutionary lineage adeptly by selecting the second movement (Assez vif et bien rythmé) from Claude Debussy’s (1862-1918) only string quartet, composed in 1893. Debussy adapts the classical form Haydn established for the genre but then ventures into exotic territory both harmonically and structurally.

Some revolutionaries are such because of their presence in the field. Florence Price (1887-1953) is getting a delayed yet hugely merited acknowledgement in today’s music world. She was the first African-American woman composer to see her works performed by a major symphonic orchestra in the U.S. After she moved to Chicago in 1927, her composing career accelerated, which included her String Quartet in G Major, completed in 1929. The quartet will perform the second movement (Andante). Price fused the classical traditions with great spirituals and folk songs set in rich harmonic textures.

Rare among composers of the Soviet era, Dmitri Shostakovich (1906-1975) stood out for the 15 string quartets he wrote. His String Quartet No. 3 came after his Ninth Symphony in E flat Major, Opus 70, which was commissioned to celebrate the end of World War II. However, Joseph Stalin condemned the work, which he felt was not sufficiently majestic enough. The quartet will perform the third movement of the piece which the Beethoven Quartet premiered in 1946. This work has a pronounced symphonic effect. The movement marked Allegro non troppo, as with the four other in the piece, originally had subtitles. This particular movement’s subtitle was ‘the forces of war unleashed,’ which reportedly was to represent the tank division invasion of Russian territory. Shostakovich later removed the subtitles because he wanted to avoid tagging the music with specific historical contexts.

More than 45 years later, Philip Glass (1937-) wrote String Quartet No. 5 (1991), which also is symphonic in character even as it is a definitive emblem of minimalism. No performer would dare think this music to be simplistic, as the four instrumentalists repeat patterns continuously with nuanced shifts and changes occurring regularly among the players.

The program closes with Caroline Shaw’s Blueprint, completed last year. A native of North Carolina, Shaw, 36, incorporates bits of the Beethoven quartet excerpt heard earlier and weaves them into new expressions. In a Washington Post review earlier this year, critic Robert Battey called it terrific: “Shaw deconstructs and recasts these motifs into a kaleidoscopic blend of old and new music, the textures sometimes melting into and at other times angrily interrupting one another. This bricolage felt perfectly natural despite its artifice, and for the first time ever, I write of the new work that it was too short.”