In high school, Skyler Chubak practiced drawing the alphabet with a calligraphy marker in a Speedball practice book. Speedball, developed a century ago by Ross F. George, always has been an indispensable calligraphic resource for penmanship and lettering artists as well as sign designers.

Realizing that it was a meticulous art which required a great deal of daily tedious practice, Chubak gave it up, at least temporarily. “Art classes were really never for me,” he says, “and I really didn’t think much about calligraphy at the time.”

After graduation, he started doing graffiti and experimented with chalk art while collecting old illustrated children’s books that featured exquisite lettering. Drawn to the exceptional yet very legible ornamental artistry of lettering in the text, Chubak returned to calligraphy and practiced his cursive script daily for many months. He recalls that he barely paid any attention to cursive writing in elementary school, even ignoring the practice worksheets his teacher would assign.

Today, cursive script constitutes perhaps half of his creative focus as a rapidly developing calligraphy and penmanship artist who has gained a well-deserved visible platform not only in Utah but also among fellow artists around the country. Chubak’s work has turned up around Salt Lake City and throughout the state in a burst of commercial, organizational and individual commissions covering everything from business signs and magazine covers to cards, posters, flyers, certificates and tributes. He also is turning his attention to independent projects that will include producing his own illustrated and lettered versions of classic children’s stories.

Prints, originals and apparel with his designs are available at his Artist Penman website.

The path from graffiti and chalk art to a contemporary appreciation for the art of American penmanship that originated in the earliest years of the country’s establishment is grounded in sound tradition. The art of fine penmanship was advocated as an essential feature of American democracy. During colonial times, older more ornamental styles such as Gothic lettering gave way to more utilitarian common uses. Most people learned only a single stilted form of the alphabet and only the well-to-do could afford to hire an artist-instructor to teach how to add flourishes to their writing script. Flourishes marked the efforts of an individual who had mastered the art of fine writing.

Surprisingly, many people in the American colonies (including women and slaves) could read but relatively few were unable to sign their names, often being only able to mark an ‘X’ on documents. The highest rates of penmanship skills were in the urban areas of the New England colonies and there were significant disparities between men and women as well as those in various economic classes. That would change dramatically after the country gained its independence, as the ability to write would become common in all parts of the new Republic, thanks in part to the development of the American public school system.

Just 26, Chubak’s passion for penmanship does stand out in a generation where any sort of handwritten correspondence or schoolwork seems to be headed for extinction, at least on a daily use basis. And, he is developing his technique by absorbing the art’s fascinating history while amassing classic editions and rare examples of the work and guidelines created by the pioneers of American calligraphy, such as John Jenkins, a New England schoolmaster who wrote The Art of Writing, Reduced to a Plain and Easy System. Previously students would copy examples repeatedly as they risked their teacher’s reprobation. Focusing on making the time to master handwriting feasible for all students, Jenkins turned to the hand-and-mind approach encouraging students to analyze first the structure of letters before copying them.

Chubak was thrilled to obtain an 1813 edition of Jenkins’ work, which expanded greatly upon the earlier original 32-page pamphlet the author published. University of Portland (Oregon) scholar Richard Christen wrote a 2012 article for The New England Quarterly about the broader societal significance of Jenkins’ approach. Jenkins advocated a simple elegance. “Both volumes of The Art of Writing displayed a plain roundhand, well crafted but absent the delicate strokes and decorative flourishes that had been popular among the gentry,” Christen explained. 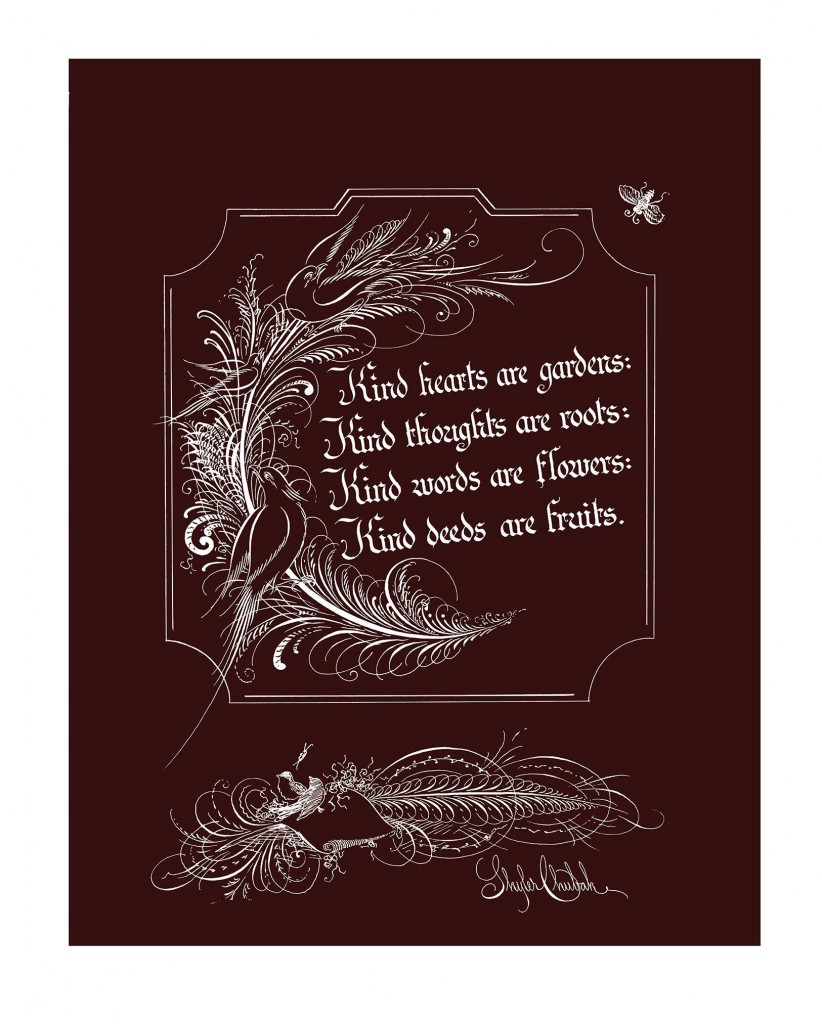 Chubak’s learning curve in calligraphy touches upon many collective values, as espoused in Jenkin’s aesthetic philosophy. Christen wrote that “Jenkins’s conception of the ingenious mechanic embraced accomplished writers as well as traditional artisans. ‘As writing is in some measure a mechanical art, it should be mechanically taught,’ Jenkins wrote, convinced that his hand-mind method would merge mercantile efficiency and productivity with genteel aesthetics.”

The 1813 volume which Chubak owns also included a candid admission by Jenkins, which Christen cites as evidence of the emotional dimension calligraphic artists confront as they strive to overcome feelings of humiliation or deficiency in creating beautiful exemplars of penmanship. As noted by Christen, Jenkins, using the third person, wrote, “From his early youth he had been highly gratified by examining beautiful specimens of penmanship, and felt a strong desire to imitate them … As a student, he tried repeatedly to mimic these finely crafted samples, but like most of his classmates, he had little success and ‘for years despaired of ever obtaining a handsome hand.’ Chubak, who started working on his calligraphic skills barely nine years ago, echoes similar sentiments when talking about his own learning process with this art form.

That early period of American penmanship, beginning with the founding of the Republic and encompassing the first half of the 19th century represents the artistic goal Chubak is striving for in his work. Among his most cherished pieces he has collected is an original engraved print from 1815 by Benjamin Owen Tyler who worked in New York City.

For the most part, Chubak has been self-taught, displaying an impressively fierce discipline for practice and restless pursuit of perfection. He went to several workshops and joined groups such as the Utah Calligraphic Artists and The International Association of Master Penmen, Engrossers and Teachers of Handwriting (IAMPETH). Finding examples is easy because lettering is as ubiquitous an element as anything else in terms of design. Never shy about asking questions in terms of technique or a useful source, he finds that networking at professional gatherings and spending even one or two days with an expert calligrapher or handwriting artist can be most beneficial, especially if there are errors in technique that must be corrected or otherwise they become too habitual to ever be reversed.

He also visits art shows, museums and galleries with a voracious appetite that outdistances many art lovers and patrons. He is continuously priming his techniques on keen observations of lines and structure in all forms of art. 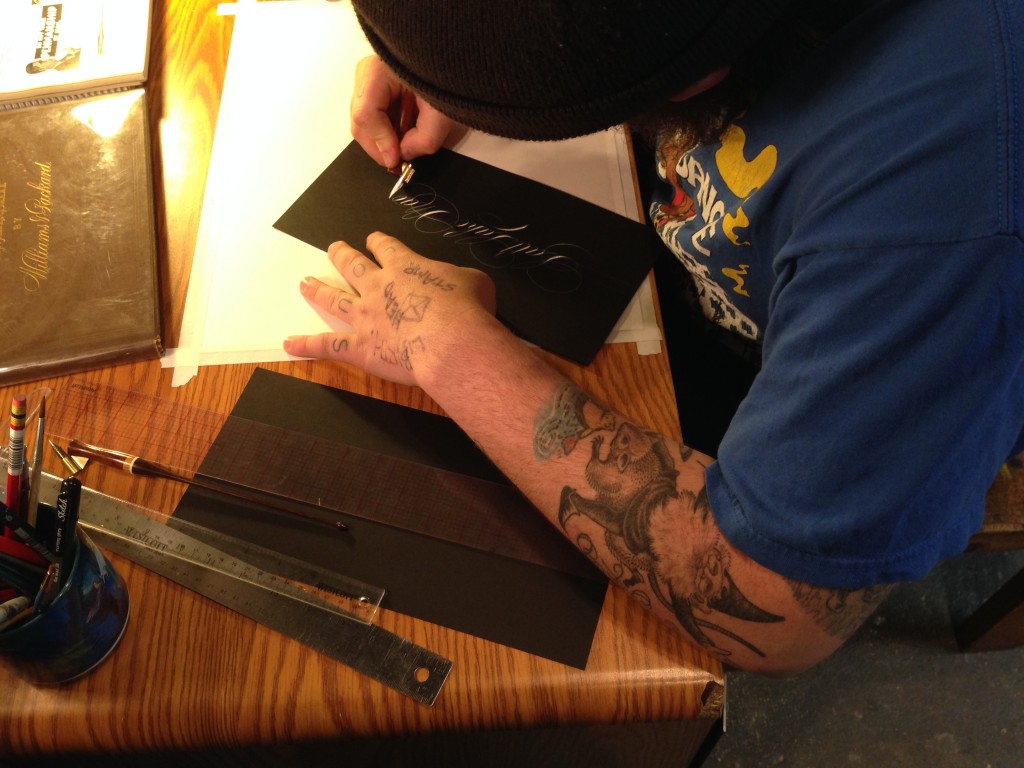 Chubak also has been a serious student of other penmanship approaches from the 19th century that diverged significantly from Jenkins’ such as Benjamin Foster which emphasized the pragmatic objective even more. Then, later in the century, Platt Rogers Spencer would reclaim much of the elegant graceful character of the earlier periods. Chubak also has become fond of the lettering and ornamental flourishes, simple and complex, that characterized many official and formal documents and correspondence in the period surrounding the 1880s. By the early 20th century, A.N. Palmer’s more direct, muscular forms, as Christen has noted, would drive much of the handwriting instruction in more modern times. It is heartening to see how Chubak’s work is directed toward egalitarian respect of all approaches where each carries worthy virtues of aesthetics and grace.

Chubak’s studio also serves as a small but prized library of exemplars and instructional guides from the history of American penmanship. A notable work is an early 19th century guide by Henry Dean, a contemporary of Jenkins, as well as works during the era when Spencer was particularly influential. 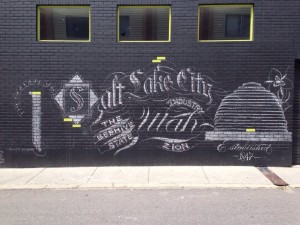 Chubak is attentive to as many styles as available from the early American penmanship artists in New England who were influenced by their European counterparts along with those west of the Allegheny Mountains who were developing a distinctly American style of penmanship.

There also are intriguing collections of Victorian Era postcards, stationery, stock certificates, memorials and other beautifully lettered documents including those with a religious or political purpose. He is always looking out for copies of original editions of manuals, styles and typography. Many books of many art genres fill the shelves and, of course, there are the prized copies of children’s literature, which inspire him to pursue his next phase of artistic development, creating his own volumes of stories that have been cherished by many generations of children. 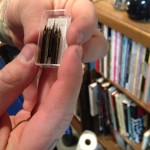 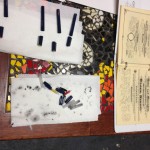 Chubak, who is sincerely self-effacing about his skills as a calligraphic artist, compels the observer to see beautiful penmanship not as an anachronism nor just as a pleasant hobby to occupy free time. As with graffiti, it is a dynamic art emphasizing the essential and most important virtue of the American identity. Jenkins, as Christen explained, rejuvenated a passion among the broader classes for beautiful handwriting that previously had been restricted to the elite classes as an aristocratic privilege. And, it is heartening to see an artist of his generation, in which everybody is prominently defined by his or her unprecedented access to portable electronic and digital tools for communication, cultivate penmanship as a still-worthy archetype of intellectual pursuit and creative expression.

Indeed, Chubak’s work is not only an unforgettably elegant, visual feast for the eyes but it also can convey purpose and important messages often more powerfully than the avalanche of marketing and advertising cliches to which we are continuously subjected.