The Utah Film Center will close its May schedule of free, public screenings with a trio of documentaries that explore variously the ideas of compassion in philanthropic communities, one of the world’s most controversial artists and an outstanding cinéma vérité piece about police violence and activism in Milwaukee.

Summer in the Forest, May 22, 7 p.m., The City Library auditorium

This gentle, humble documentary does more than highlight the impact of the L’Arche communities that have sprouted around the world over the last 50 years and serve individuals with varying degrees of intellectual disabilities. It is a testament that upends our conventional perceptions of altruism and philanthropy through the compassionate, sensitive words of Canadian philosopher Jean Vanier, who was instrumental in starting the L’Arche (which translates from the French to ‘the ark’) in 1964.

Directed by Randall Wright, the film could use some tightening but nevertheless it sets a fine lens on the L’Arche legacy and the reasons for why Vanier set the model as he did. As of 2018, there are 147 communities worldwide, including 19 in the United States (the closest to Salt Lake City being located in Portland, Oregon). In total, there are more than 8,000 residents.

Wright picks two locations: the first founded in Trosly Breuil, France by Vanier and Thomas Philippe, a Catholic priest, and the second in Bethlehem, the Palestinian town in the West Bank just south of Jerusalem. While L’Arche’s foundation was based in Roman Catholicism, the communities have gradually expanded the faiths they represent.

Vanier, who is approaching his 90th birthday, belies the traditional image of a philosopher. In the 1960s, he consolidated the fight to secure the rights of individuals who had been hidden in asylums punctuated by violence and abuse. Quintessentially gentle as viewers will immediately comprehend, he delights in the playfulness of the residents at the French commune. The residents range in ages from young (20s) to middle 70s and their stories are endearing. One of the elderly residents is coming to terms with his turbulent past. A younger man hopes to establish a lasting relationship with a woman. Vanier plays matchmaker for Fred and Celestine who are seen celebrating an engagement party near the end of the film.

Some of the most interesting moments in the film come from the Bethlehem site, a rare opportunity to see the potential for Palestinians and Israelis to coexist in meaningful, peaceful ways. The residents are happy, as they sing and make woolen crèches, the definitive Bethlehem piece of tourist memorabilia, which then are sold. A L’Arche commune is focused exclusively on compassion and the selfless practice of friendship.

Vanier is clear that the underlying objective is less about the willingness to make generous gestures as it is to listen and understand sincerely the residents at L’Arche. In a rapidly paced world where it seems fewer people are willing to stop even for a moment to listen and understand what it truly means to be compassionate, Vanier offers a remarkably simple explanation. He echoes a point that he stated originally in a 2006 article in U.S. Catholic magazine: “We have learned how we are transformed by weakness. But we are in a culture that believes we are transformed by power. And the tension between weakness and power is in us all.”

Maurizio Cattelan: Be Right Back, May 23, 7 p.m., Utah Museum of Fine Arts

Directed by Maura Axelrod, this documentary never slips in its entertaining appeal from its opening moments. The subject of the film, of course is a natural – the Italian-born artist Maurizio Cattelan, who has astounded, shocked and angered the world throughout his career. But, Axelrod also provides enough context for the viewer to understand why some people unfailingly admire him and others find him inexcusably repulsive. 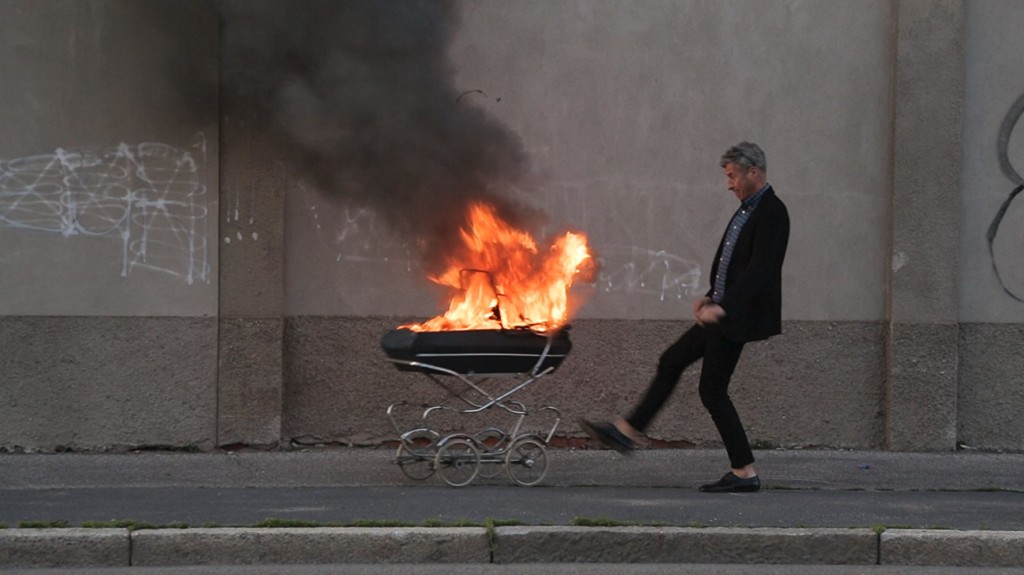 It also is an engrossing exploration of what conceptual art is intended to achieve, especially in how we process the art and decide how it might transform the ways in which we observe our own environments and landscapes. Axelrod handily explores the entire oeuvre of Cattelan’s work, including perhaps the most provocative, controversial piece – a realistic sculpture, created in 1999, depicting now Pope Saint John Paul II, clad in the formal vestments of his office, who is crushed by a meteorite.

Cattelan has gone from obscurity and poverty to being one of the most sought after artists among high-flying collectors and the subject of an incredible retrospective at the Solomon R. Guggenheim Museum. Indeed, while much of his work inspires laughs and expressions of curiosity, the film is commendable for exploring deeper, more serious contexts of Cattelan’s creative approach.

But, as unforgettable as his art is, Axelrod elevates the artist documentary in trying to discern just who Cattelan really is. The film includes numerous interviews with gallery owners, critics and two girlfriends but the real star is Massimiliano Gioni, whom we discover is really the artist’s alter ego who poses as Cattelan. It puts the chef’s kiss, so to speak, on a film about the workings of the art world, not just from its aesthetic underpinnings but also to the commercial dynamics that have brought unprecedented streams of money into the art collecting business.

An interesting postscript is that the film included Cattelan’s retirement announcement, which he already has broken. And, most recently, an online article in Vogue magazine indicated that Cattelan had recruited the Italian fashion label of Seletti to design knit scarves highlighting the names of some of the world’s most famous museums in the style of apparel one would wear to show support for a sports team. He also is working with a Gucci for an exhibition that will open this fall in Shanghai.

The film is highly recommend. It has received at least seven awards, including most recently honors as best documentary feature at this year’s Beloit International Film Festival.

The Blood Is at the Doorstep, May 29, 7 p.m., The City Library auditorium

This impressive feature-length debut by director Erik Ljung stands out as one of the most compelling looks at police violence that has been produced in documentary. A film that encompassed three years of work, Ljung starts with the details of the April 30, 2014 death of Dontre Hamilton, a black, unarmed man who was shot 14 times and killed by a Milwaukee police officer. Hamilton was murdered by the officer (Christopher Manney) who was responding to a non-urgent wellness check at a downtown park adjacent to a Starbucks location. 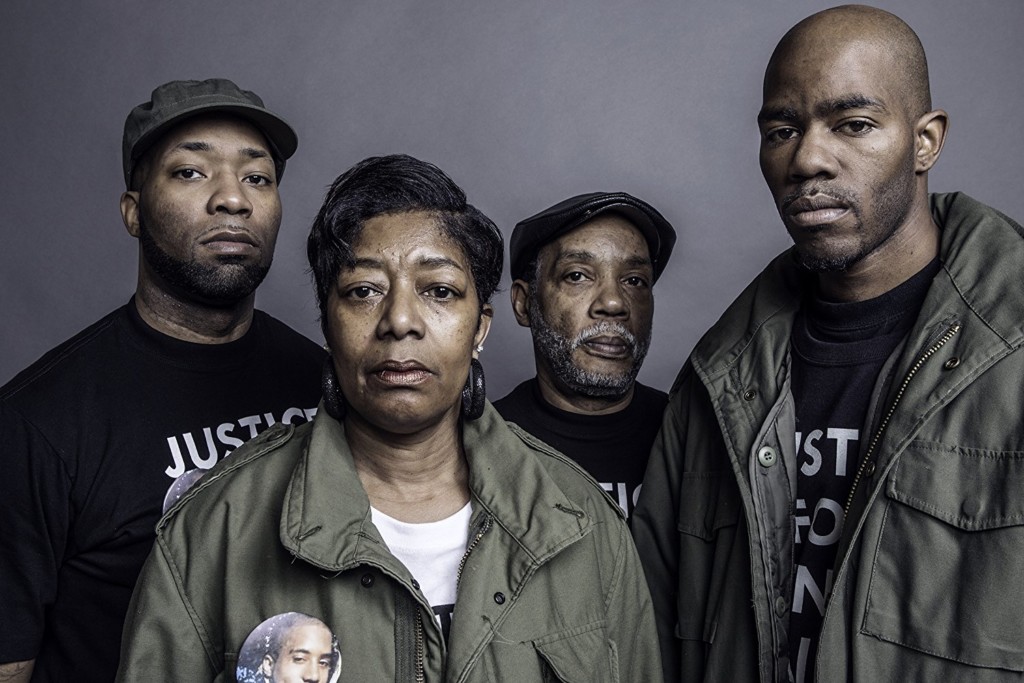 Ljung draws close to Hamilton’s surviving family members, who fill in the details about the young man’s life. While he was diagnosed with schizophrenia, he was not homeless, as initial reports had contended. The story develops as the victim’s brother, Nate, and his mother, Maria, become activists who want the truth as well as justice. They become activists, learning a good deal along the way about advocacy and conflict. Not only must they deal with the frustrations of trying to get honest answers from the Milwaukee police chief (Ed Flynn), prosecutors and other public officials, but they also are focused on a specific purpose, a subject that causes a good deal of attention from activists who have come to Wisconsin to aid the Hamilton family’s efforts.

Regrettably, the details and the circumstances of the young man’s murder are painfully familiar. However, Ljung excels at honing the most relevant and urgent context at stake in this national issue by examining what happens specifically in this case. The issue of executive use of force is reinforced as Ljung introduces the story of Michael Bell, a young white man shot by Kenosha police in his driveway a decade before Hamilton’s murder.

The film captures many nuances, a good example being the various excerpts in which the Milwaukee police chief is featured. In some moments, Flynn appears empathetic to the family’s grief but he also insists that the matter of race was not relevant to the case. He explains that it was the young’s man schizophrenia that led to the tragic altercation. Even when he fires Manney, the officer in question, the reason for the dismissal is based on a technicality of procedure. In one scene though, Flynn also expresses a point that has been made by some prominent writers and commentators including Ta-Nehisi Coates at The Atlantic. Flynn says in an apparent moment of his own frustration, “It’s stunning to me that there is not a social problem in America that can’t be solved by more training for the police.”

Both local and federal prosecutors refuse to indict the officer on murder charges. And, a subsequent federal investigation of the police department, which began during the Obama administration, was terminated in early 2017 after his successor took office. Nevertheless, the surviving family members have continued the cause of the movement in which they unexpectedly became involved.

The screening will be followed by a panel discussion with Jeanetta Williams, president of the Salt Lake City branch of the NAACP; Lex Scott, founder of Utah’s Black Lives Matter chapter, and Heidi Keilbaugh, the surviving partner of James Barker, who was killed by a Salt Lake City police officer in 2015.