In Rams, the new elegant, harmonious biographical documentary about Dieter Rams, the great German product designer, there are scenes of him visiting the new factory headquarters for the U.K. furniture brand Vitsœ, located in Leamington Spa in Warwickshire.

The new factory, indeed, epitomizes the 10 design principles that sit at the core of Rams’ philosophy throughout his long career at Braun and Vitsœ. The facilities were funded through a five-year bond made possible through investments by Vitsœ’s customers and a local community development partnership. With the beech timber in the beams and columns to enhance the natural cream-colored effect, the structure evokes a workspace that approaches the serenity of paradise. It has natural cross ventilation and a photovoltaic grid on the roof generates power for the building and puts it back into the grid. 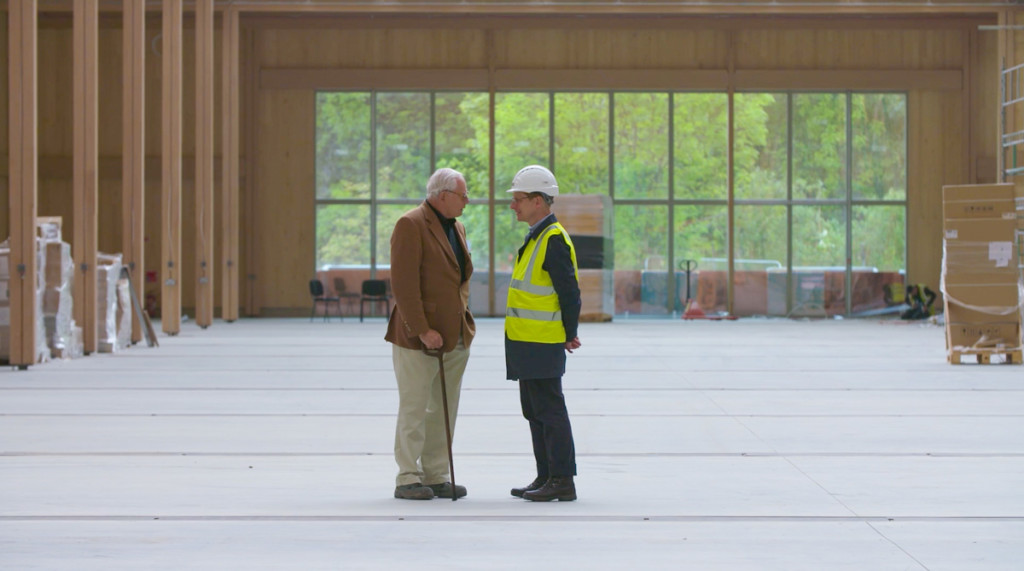 But, the coup de grace is that the factory includes space to sublet to community groups for living and work quarters. Gary Hustwit, director, in an interview with The Utah Review, says he had “no idea” when he went to film the factory in action that one of the groups which had leased space is Motionhouse, a dance-circus company. The film includes scenes of the performers rehearsing in a factory that doesn’t seem unusual at all. It blends in perfectly with the rhythm and tone of the workspace.

The 2018 film will screen Nov. 7 at 7 p.m. in a free, public program at the Jeanne Wagner Theatre at the Rose Wagner Center for Performing Arts. Presented by the Utah Film Center’s Through The Lens Series, the program will include a Q&A session with Hustwit and moderated by Doug Fabrizio of KUER-FM’s Radiowest. 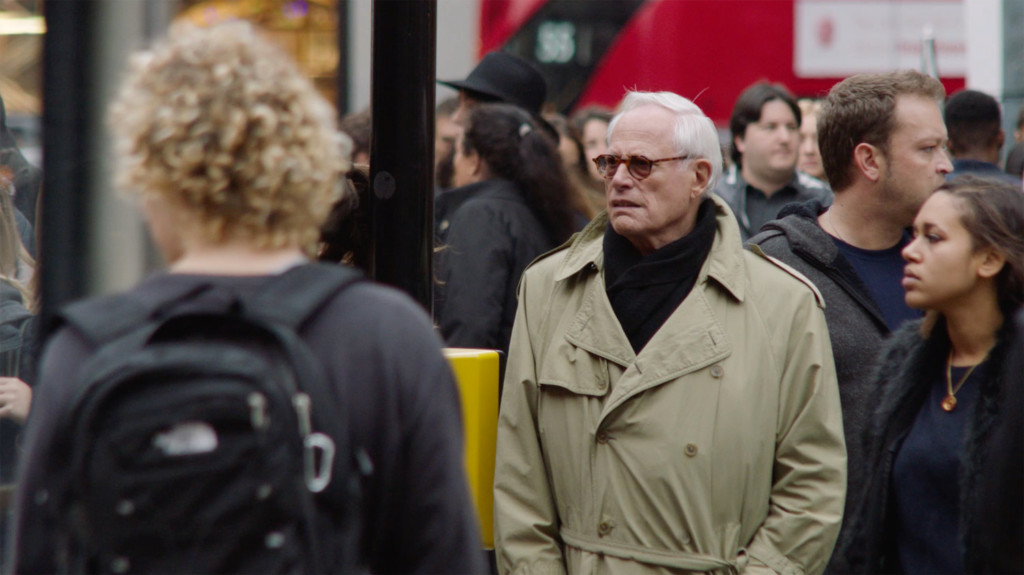 The film has been screened at venues in the U.S., U.K. and other European locations, including most recently Berlin and Stockholm. The film will be available on various streaming platforms before the end of the year. At 86, Rams is in excellent health, save for a cane he uses after having knee surgery a few years ago.

But, what perhaps is the most extraordinary discovery about a personality revered in the professional canon of product design is his grasp and engagement in today’s world, which is accomplished without the benefit of digital devices and computers. At the beginning of the film, Rams is at his desk in his home, tapping on a Valentine typewriter designed by Ettore Sottsass.

Throughout the film, Rams talks about his life’s work but also expresses a thoroughly informed and enlightened philosophy about the implications of consumerism and materialism along with the dangers of seeing politicians elected who run exclusively on a platform of fears. In a scene where he answers questions from students, Rams emphasizes ethical and social responsibilities. As we learn more about Rams’ experiences, especially at Braun, it becomes evident how marketing first crept into other business territories before overtaking the impetus for decision making once reserved exclusively for product designers. Corporate demands focused on making the brand logo bigger and bigger. Once The Gillette Company took over Braun as a wholly owned subsidiary in the 1980s, Rams eventually would leave. At Vitsœ, among his most famous designs was the 606 shelving system. The company fully integrates his principles.

Hustwit, who is well known for a trio of documentaries about design (Helvetica, 2007; Objectified, 2009; Urbanized, 2011), had tried for years to get Rams’ approval for a biographical documentary. Hustwit interviewed Rams as one of many designers for Objectified and he was impressed by his passion for going beyond the technical aspects of design to consider the social, ethical and environmental considerations. 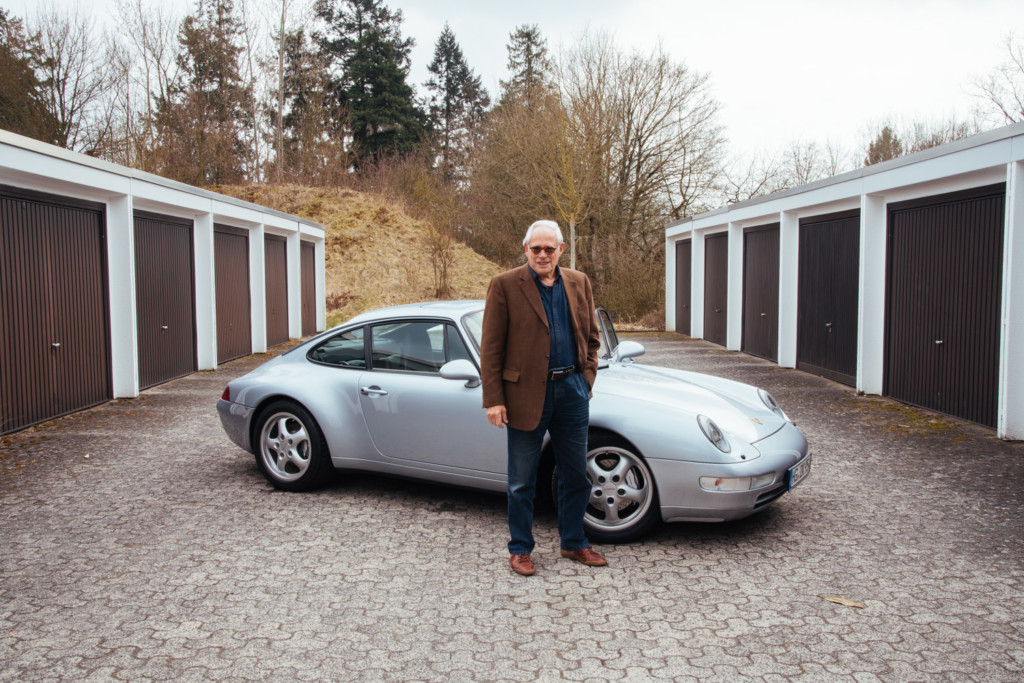 However, Hustwit’s prior experience with Rams did not guarantee a green light for the production. Rams had refused many requests to participate in a documentary solely about his life and work, reiterating his broad distrust of the media. The clincher was that the film would give the primary space to expound on Rams’ ideals and concerns. The film accomplishes this wholly.

The film’s overall pleasing, elegant and surprisingly peaceful feel reflects sincerely upon Rams’ genuine character. He is witty (Hustwit says that those who speak German will in particular pick up on some the nuances and inflections from Rams) and is generous about acknowledging his peers in the profession, who speak unequivocally about him in the warmest tones of appreciation. Naoto Fukasawa, one of the leading Japanese industrial designers, offers a particularly eye-opening revelation. While Japanese minimalism often is credited for producing simple, elegant product designs, Fukasawa says it really is a fusion, as European modernism, as the product designs of Rams and his peers exemplified, influenced and shaped classic Japanese design principles of simplicity and elegant minimalism. 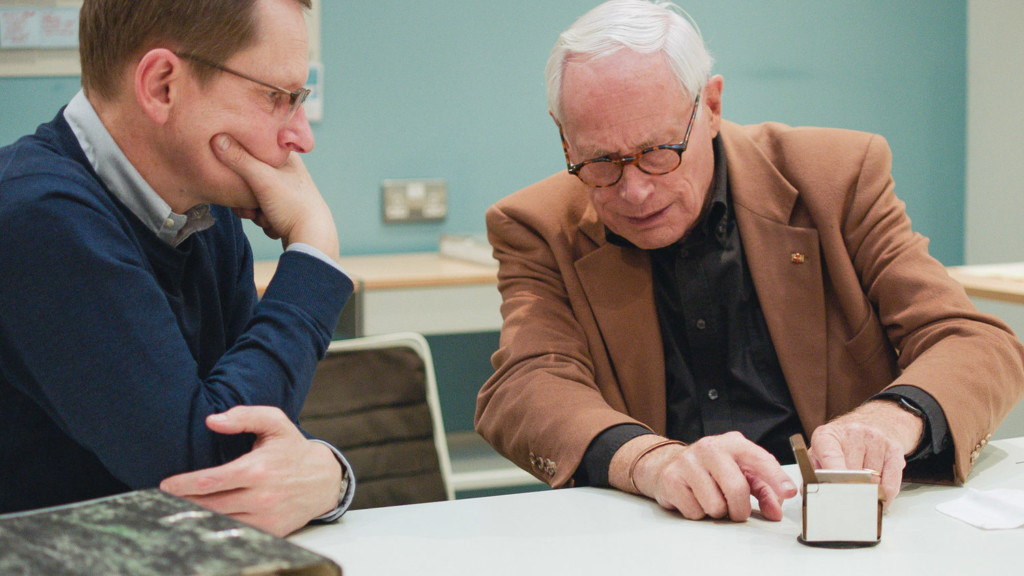 Hustwit strikes a relaxing, comforting tone in showcasing the visuals. In Rams’ home, we see the timeless aspects of products which the designer and his wife use in their daily lives. Disposable consumerism is nowhere to be found. Rams designed products to last for a life time, requiring only replacement parts as needed. It is precisely the sort of living space one would imagine from the creator of the 10 principles of good design, which are now universally accepted even if they are not always applied as Rams would have envisioned it. Rams says that if he had a chance to redo his career, he would be a landscape architect. The home includes a stunning Japanese-inspired garden and a scene of Rams carefully trimming a bonsai underscores the heart and soul of his design aesthetics and philosophy.

In the scene with students, he responds to a question explaining why he never considered working as a designer for the automobile industry. There is a delightful twist near the end of the film with Rams driving his 911 Porsche, which is more than 20 years old and is in pristine condition.

The film’s overall effect is completed by the soundscapes and music created by Brian Eno. Music always is integral to Hustwit’s work because of the director’s own passion for it. Hustwit wanted the counterpoint to reinforce the film’s innate serene, elegant aesthetics. “On one end, there is Rams with control, order and precision and on the other, we have Eno who works with methods emphasizing chance and randomness,” Hustwit explains. “It was an interesting combination to experiment with because they end meeting in the middle.” The results are convincing, as both elements give the film a synthesizing clarity in appearance and context – a wonderful cinematic ensemble.

At barely 72 minutes, the film never seems rushed. The new Vitsœ factory certainly validates the relevance and continuing significance of Rams’ contributions and philosophy. For viewers, it also is one of the most satisfying visual experiences any documentary can offer while emphasizing the role that consumers also can take in combating the negative impacts of materialism and disposable consumerism.