When composer Wang Lu moved to New York City’s Upper West Side, she was impressed by the amount of nearby green space in one of the world’s largest metropolises.”It was so clean and quiet,” she says.

In the 1990s, when she was a student at the Beijing Central Conservatory of Music, Wang remembers how quickly the noisy pace of razing old structures and building new complexes was transforming the city, as she observed on her way to classes. “One day I would walk past an area and suddenly overnight, the building that was there was gone. It would happen just that quickly,” she explains.

These contrasts and the rapid rate of development that remade China’s urban landscape inspired her to think about nature with more breadth and depth and what this meant for living beings and species as well as our environment.

On the upcoming Jan. 16 concert, Songs of Perseverance, as part of NOVA Chamber Music Series’ season subscription offerings, Wang’s Rates of Extinction for solo piano will receive its Utah premiere. The 2016 work comprises five short movements, which incorporate polyrhythmic layers to signify the heartbeats associated with the accelerating number of species that have gone extinct in recent years as well as the effects of human-made development. The concert will be at 3 p.m. at Libby Gardner Hall at The University of Utah.

Heartbeats, pulses and rhythms, indeed, encompass Wang’s life as a musician, composer, colleague and mother. As her own program note for the piece suggests, Wang writes, “Every day, industrial expansion and the modernization of societies push the limit of earth’s natural capacity to accommodate and sustain us. Many animal species quietly suffer and become extinct due to the harsh conditions imposed by human advancement.”

Wang’s life in China began in the city of Xi’an just barely a few years after the Cultural Revolution had ended. This is no trivial detail, as families in Xi’an and so many other cities in China quickly embraced Western traditions of classical music. Wang started piano lessons at the age of five.

Wang,who was an only child. recalls that practically every house in the neighborhood had an upright piano, thanks usually to money that parents and grandparents had saved up to purchase it. Incidentally, her father sang Chinese opera and performed in a military-sponsored troupe. This element would be added to the expanding palette of musical influences, ideals, styles and aesthetics that informed the intuitive foundation of her compositional style. Wang also enjoyed karaoke. Among her fondest memories is watching her father and his friends reenact a scene from an opera they performed. “They had memorized all of the parts and the connections they made in karaoke were signs of nostalgia and real friendship,” she adds.

“The idea of playing the piano symbolized upward mobility and it was suited to girls as a way of helping them cultivate their path into the world,” she says. The competitive vibe also was intense and nerve-wracking, especially as young pianists waited backstage to perform before juries. There also is something sentimental about her childhood days of learning to play the piano. Her upright was the ubiquitous Pearl River model that appeared in many Chinese households. But, when the keys were not in their most ideal condition, her parents placed weighted bags behind the keys so that she could continue to develop the essential strength and dexterity in her fingers.This is one reason why Wang does not like to prepare the piano, as many contemporary peers might do when writing music involving the instrument. She prefers to let the keys exact their full justice in producing the sounds from the instrument.

It was only as a teen that Wang learned that she could compose her own music, which really was a shocking discovery for a conservatory student in Beijing. Suddenly, the world of music opened up tremendously. Adding to the bread-and-butter repertoire that every accomplished pianist became familiar with — Chopin, Rachmaninoff and Liszt, to name a few — Wang discovered 20th century composers including Ligeti, Xenakis, Martin Bresnick and many others. After she moved to the U.S. in 2005 to pursue her doctorate at Columbia University, she became interested in jazz and many of its characteristic elements including improvisation. The move to the States was strategic for her creative development. In China, budding composers might have limited opportunities to write what they were most passionate about expressing. Some composers rely on government commissions to write music that serves propagandistic purposes. Wang certainly did not want to eschew folk music and Chinese opera that were part of her cultural roots, but she also says, “my culture is not 5,000 years old. China was changing so fast and I wanted to write new music that specifically addresses my experiences of life today.”

Preparing to write Rates of Extinction, Wang thought about rates and rhythms in their various manifestations: the rate of infrastructure change and urban development not just in China but elsewhere, the alarming acceleration in the numbers of species going extinct as well as their heartbeats, the IV drip in a hospital and a mother trying to conceive. Along with polyrhythms, Wang relies on harmonic timbres, leveraging the resonance of overtones and undertones that augment the pure minimalist character of the music. The musical character of each movement varies. In one instance, there is a motif crafted as it might be in Morse Code, followed by a brief inflection of jazz and a moment of improvisation. Yet, Wang is deliberate not to let pessimistic tension overwhelm the piece, as she focuses on a resolution in the music that does not dismiss the inevitable trajectory of what is happening to the natural world but it also emphasizes the necessity of perseverance.

The piece was premiered by NIng Yu, a pianist who also studied at the same conversatory that Wang attended, and she included it in a recent album release. The work Carrie’s substantial meaning to both women. “Rarely does one see an instrumentalist from China who is interested in performing new music,” Wang explains, “and while I was writing it, she was pregnant with her first child and I had started thinking about raising my own family.”

Wang is the David S. Josephson Assistant Professor of Music at Brown University. Her music has a prodigious international portfolio. Among numerous hours, she received the Berlin Prize in Music Composition (Spring 2019 residency) and was a 2014 Guggenheim Fellow. She also has received commissions from the Koussevitzky Foundation at the Library of Congress and the Fromm Foundation at Harvard.

The concert theme also is represented by Clara Schumann’s Piano Trio in G minor, opus 17 and a string trio by Gideon Klein, composed in 1944. The Klein work reflects perseverance in the most heart-breaking way. Klein, still in his twenties, was a gifted musician who was incarcerated in the Terezín Concentration Camp, where many creative and artistic individuals were detained. Klein was among the musicians who organized concerts and composed works to be performed in the camp. In his last months, at the age of 26, he was eventually transported to Fürstengrube, where he most likely died although the details have never been conclusively documented.

Concertgoers are reminded to wear masks and are required to produce proof of full vaccination or a negative COVID-19 test. For more information about health and safety policies, see the NOVA website. 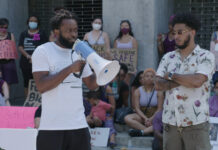 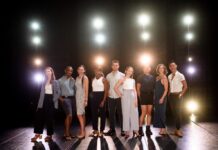