The art of poetry slams has enjoyed a solid base of popularity at the Utah Arts Festival and its strength has followed the growth of the literary art form. Many of the individuals who will be competing in the qualifying individual rounds (June 23) and then in the finals (June 26) epitomize the growth of poetry slam in the community

Eight teams on their way to the national poetry slam competition in Decatur, Georgia later this summer – including the Salt Lake City Unified team – will compete at the festival in a format that retains the punchy, visceral impact of slam poetry but also displays the positive advantages of competitors among peers who respect each other’s art. It’s one of the best venues to practice and test materials and see what will be most impactful for the nationals. One of the teams appearing is Denver Mercury, which finished fourth in the nationals last summer in Oakland, California. The other seven teams are SLC Unified, Montana, Portland Slam, BattleBorn Vegas, Boise Slam, Albuquerque Slam (which made it into the national semifinals last year) and Copper Hills High.

Two members of this year’s national team also have been major leaders in the local slam movement. Jesse Parent took second place at the 2010 and 2011 Individual World Poetry Slams, and was a finalist at the 2012 Ontario International Poetry Slam. R.J. Walker has been a major leader, especially with Wasatch Wordsmiths, a nonprofit organization dedicated to bringing the art of spoken word performance in the Salt Lake City metropolitan area. He also has hosted the Greenhouse Effect Open Mic Workshop, Salt Lake’s longest running open mic event. Like Parent, Walker is well known at the festival’s literary arts venue. He placed third in 2014 in individuals, was among the winners of the 2013 Wasatch IronPen writing competition, and has finished as high as 23rd in the world at the Individual World Poetry Slam.

For festival visitors, the slam competition provides a good glimpse of the level of quality that is expected in a national competition. Judges for this weekend’s event will be randomly picked from the audience – usually five. The competition format is straightforward. There are time limits. Performances are judged on performance, content and other factors. Each judge scores on a 10-point scale, with one being the lowest and the highest and lowest scores are dropped to calculate the final result.

The event clearly reveals the factors that legitimize this literary art form. The tight time format requires the slam poet to be clear, concise and contextually relevant and to find a hook which compels the audience to see in one brief glimpse the significance of the slam poet’s material. And, one’s expertise in craft lifts the poet’s capacity to communicate even the most difficult and controversial topics – ranging from pop culture to corporatism to deeply personal life crises – in straightforward verse and prose that puts an immediate, human face on the topic at hand. Finally, good poets acknowledge their audiences, who actually can serve as good barometers for material that either rises to the competitive moment or falls flat, Parent explains. 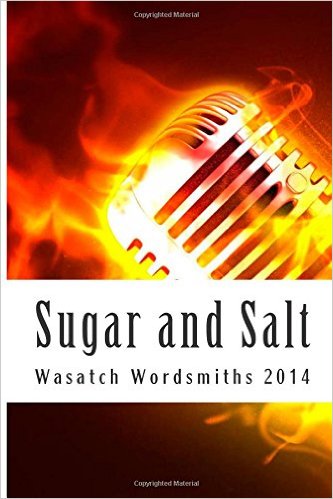 Poetry slams work because every artist is ambitious, eager to demonstrate that poetry is not an opaque art form but one that always is relevant and accessible. Parent, Walker, Tyler and others have become some of the city’s foremost representatives of the poetry slam art movement. Salt City Slam has cemented its place in the artistic community, gaining a home at Weller Book Works in Trolley Square. Parent and other local poets were featured several years ago in a wonderfully executed short documentary film ‘The Silhouettes,’ which was directed and produced by students at Spy Hop Productions. The film also was screened at the festival’s Fear No Film venue.

Cash prizes will be awarded to all five teams, with amounts determined by their finishing place in the competition. Parent explains teams usually cover some of their travel expenses with the prize money or they might apply it to what they will need to travel to the national competition.