The newest main gallery exhibition at the Utah Museum of Contemporary Art (UMOCA) enlightens, elucidates and calls for an empathetic understanding of individual artists who give their identity an artistic voice decoupled from stereotypes, perceptions, mirrored images and mass media portrayals. The exhibition, i know you are, but what am i? (De)Framing Identity and the Body, runs through Jan. 7, 2023. The variety of the thematic objectives encompasses an impressive range of artistic treatments.

For example, Dana Robinson’s acrylic painted wood panel pieces are inspired by ads and images of a cover profile feature about comedian Richard Pryor taken from old issues of Ebony magazine. For the viewer, Robinson sharpens the distinction between media perceptions of respectability and Black beauty and excellence, where the standards are not institutionally or culturally determined by the politics of respectability but instead by the individual’s own genuine qualities.

There is Gregg Deal’s digital video of him performing his 2021 song Bad Indian with his punk band Dead Pioneers. Deal, who is Paiute, has crafted lyrics that are autobiographical but, more importantly, emphasize the problems of compounding and reducing one’s identity to satisfy not only those of his own people but also for others who are trying to atone for their own guilt about the historical abuses carried out against his people.

Deal sings, “I use the word ‘Indian’ liberally/I get it/it’s not correct/That dude that sailed the ocean blue mistakenly called us that because he thought he was in India/of course he wasn’t/But there is this other thing where the word ‘Indian’ actually has a legal precedence/In treaties/And in the so-called founding documents/Written by so-called founding fathers/I get criticized by my own people for saying ‘Indian’/Without anyone really realizing that any word used to lump us into a single group is incorrect/I was told to speak in a language they understand.” Here, we see Deal taking on the problematic politics of respectability as they are relevant to him, just as Robinson accomplished her own critique of the issue with the Ebony-inspired wood panel prints.

Amber Tutwiler’s oil canvas painting Mirror, Mirror capitalizes on her background in dance and gymnastics where the fragments making the human forms of legs, shoulders and faces in her tableau evoke a surreal and ephemeral image of a modern dance performance. The depiction of fabrics and curtains heightens the division between digital and real portrayals of the image. In Pulse, a 2019 multimedia choreographic piece she set for a premiere in West Palm Beach, Florida, she set movement upon each dancer who became a duplicate of the original performer. As she notes in her artistic statement at her website, “mirrors, video projection, installation, and sound transformed the stage into the embodiment of a digital space. The work culminated in the falling down of a large sheet of transparent fabric, symbolic of the interface, leaving but one performer on the stage.” This particular work featured at UMOCA ideally complements Tutwiler’s larger multifaceted artistic aims.

Fidalis Buehler’s mixed media painting All American portrays a star football athlete who is beheaded but his full identity also is concealed by his helmet. Buehler, who is on the art faculty at Brigham Young University, is from a multiethnic family, where his father is American and his mother is from Micronesia. He also lived in American Samoa where football was a prominent feature of pride and identity for many Pacific Islanders. In a published interview for a BYU digital media publication, he says his work arises from an emotional epiphany of “spontaneous streams of consciousness coming together at the right moment.” Buehler is part of a growing number of artists,musicians, authors and creative producers who have used their work as a platform to shine light on the pressures of the model minority label, which often has been associated with the growing communities of Asian Americans and Pacific Islanders in the U.S.

One of the show’s most striking pieces is Short Boy by Ken Gun Min, a large mixed media canvas work with oil, Korean pigment and glass beads. Min captures beautifully the dynamics of critical questions such as does assimilation suggest that immigrants abandon their own cultures and embrace American values and traditions? Or, how one decides to assimilate into the mainstream of American society does not depend only upon an immigrant’s subjective feelings or readiness in a new environment, but also how the economical, racial, and ethnic barriers imposed on them may be addressed.

Min’s work is a meticulous, comprehensive portrait. There are digital elements, with images from smartphones, internet and ads interspersed and juxtaposed with the artist’s drawings and paintings, fabric fragments and parts of folding screens and the use of Asian ink pigments with oils commonly used in Western art. Min’s work emphasizes why an individual’s unique hybrid sense of identity should not be subsumed into efforts especially in mass media and culture to reduce and collapse intragroup differences within Asian communities into a panethnic identity that is convenient for the wrong reasons. In a previously published interview, Min explained his creative process: “Every day there is a countless number of visual information being dumped into our awareness. These images are being infinitely reproduced and distributed, passing through our cognition filters to either remain or be trashed…. The flow of images shows and influences the way I make art, more specifically, influences the way I see or I live. The diversity of categories—media, personal, and historical references—become materials to use. They are layers creating new context and flow.”

Melissa Joseph’s Julie, Dad and Bap (After Manet) is a marvelous textile work, featuring needle felted wood on industrial felt. The viewer is immediately drawn to a toddler dressed in pajamas and a Super 8 camera, which is staring directly at the viewer. Viewers will note the Eduoard Manet reference, specifically about The Luncheon on the Grass painting featuring the model Victorine Meurent. Manet’s 1862 painting stood out for how explicitly recognizable the individual was in the final work and how the viewer’s attention is directly focused on the individual, who, in fact is real and is central to the narrative setting of the work. In a previously published interview, Joseph had explained how the materials pick her as she creates a work incorporating multiple media elements. She explained, “I can break down all kinds of barriers in the work that I feel powerless against outside. I feel tremendous freedom moving across materials, bridging incongruencies, and maybe that’s where the sense of urgency comes from. I don’t feel limited unless I fall into the trap of traditional (read: not inclusive) academic assessments.”

Another artist featured in the exhibition who also has a blended multiethnic background is Monica Kim Garza, whose 2018 painting If You Like Piña Coladas is featured. Garza, with Mexican and Korean roots, has produced a work that would be a perfect selfie for Instagram, especially for how it contextualizes nuanced cultural perceptions. Several young women are portrayed, sitting by the pool enjoying piña coladas but the work’s frame, which also is seemingly unbounded. The effect subsequently overwhelms the temptations or tendencies to land on an objectified view of the scene. The women are self-confident, unbothered by anyone who would dare interrupt or intrude upon their moment of female camaraderie and socializing. Garza’s Expressionistic technique pops with her deft counterpoins of vibrant colors and softer tones and hues which make the scene convincingly realistic.

Other new exhibitions at UMOCA include My Grandma is a Meme by Alise Anderson, which becomes a splendid tribute to Trudy White, her late grandmother. Anderson is one of the current participants in the museum’s A-I-R (artist in residence) program. Anderson has selected an eclectic sample of her grandmother’s immense archives, representing her full-throated love and energies for all things that are arts and crafts. White had cataloged everything including greeting cards she made, party invitations she designed, cakes, painting, and crocheted dresses for dolls. White was a master of domestic industry, and Anderson has chosen works that show just how much White enjoyed these arts and crafts throughout her long life. And, the gentle homespun humor she put into her creative efforts adds to the kitsch effect. The kitsch displayed, however, is more than a novel charm. Anderson’s grandmother must have been the most delightful host and party planner who ensured that her guests and family members always would have something to remember from special occasions. Anderson’s show also reminds that one’s motivation for creative pursuits are as fulfilling and rewarding as those who pursue professional careers or public gallery exhibitions. Anderson’s exhibition is available through Aug. 6

Many examples of multidisciplinary and interdisciplinary design work of Utah artists, including environmentally sustainable designs and architecture, are part of the DesignArts2022 exhibition. This show was organized by the Division of Utah Arts and Museums and juried by Benjamin Prosky, the executive director of the New York Chapter of the American Institute of Architects. The show is available to the public through Sept. 24.

Among the featured items is Oracle Bones, recently published by The University of Utah Marriott Library’s Red Butte Press. The book was a collaboration of author Terry Tempest Williams and Gaylord Shanilec, printer and wood engraver. Shanilec shaped juniper and sandstone artifacts collected from the southern Utah desert into printing plates.

Other notable items include the Aphrodite rocking chair, made of American black cherry wood and weighing approximately 100 pounds. David Delthony won best of show honors for this sculpture. From AJC Architects, there is the Plug and Play design project which involves plugging in prefabricated housing units, with dimensions to fit a standard parking space, into infrastructure made available in a parking lot. There also are theatrical costume designs, examples of a tiny house village, and renewable soft home textiles, among other items.

In the museum’s Projects Gallery, Aloe Corry’s Loose Limbs features drawings where the human form is rendered through the metaphorical elements of trees as a representation of pivotal emotional moments in one’s life story . Corry’s work is a visual rendering of narrative dynamics and elements, with metaphorical references to trees, branches and twigs that have been integral symbols in world literature since ancient times. This includes the Homeric epics and classic Greek tragedies such as Sophocles Antigone. Corry’s exhibition is available through Aug. 6.

For more information about UMOCA and the current exhibitions, see the museum’s website. 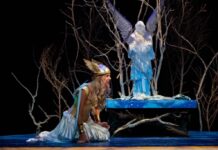 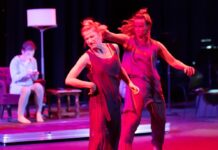 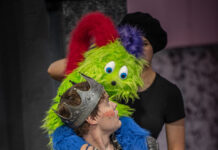 SLACabaret: Down The Rabbit Hole is scintillating summer delight in Salt...