Nearly nine years ago, Shirley Dygert, then in her mid-50s, went on her first tandem jump at the Skydive Houston drop zone in Texas. Her husband, who had plenty of thrilling experiences of his own as a cliff diver, stayed on the ground to photograph his wife’s first jump. As a 2014 Sports Illustrated feature noted, Shirley always has been a cautious woman who avoided driving at night and unsuccessfully tried to dissuade her older son from skydiving on his birthday in the previous year.

However, when a parachute release malfunctioned, her instructor Dave Hartsock did not panic and acted to ensure that Shirley would be able to absorb the impact of a hard landing. When they hit the ground, both survived. Shirley recovered completely from her injuries but Hartsock is now confined to a wheelchair for the remainder of his life. As Chris Ballard wrote, 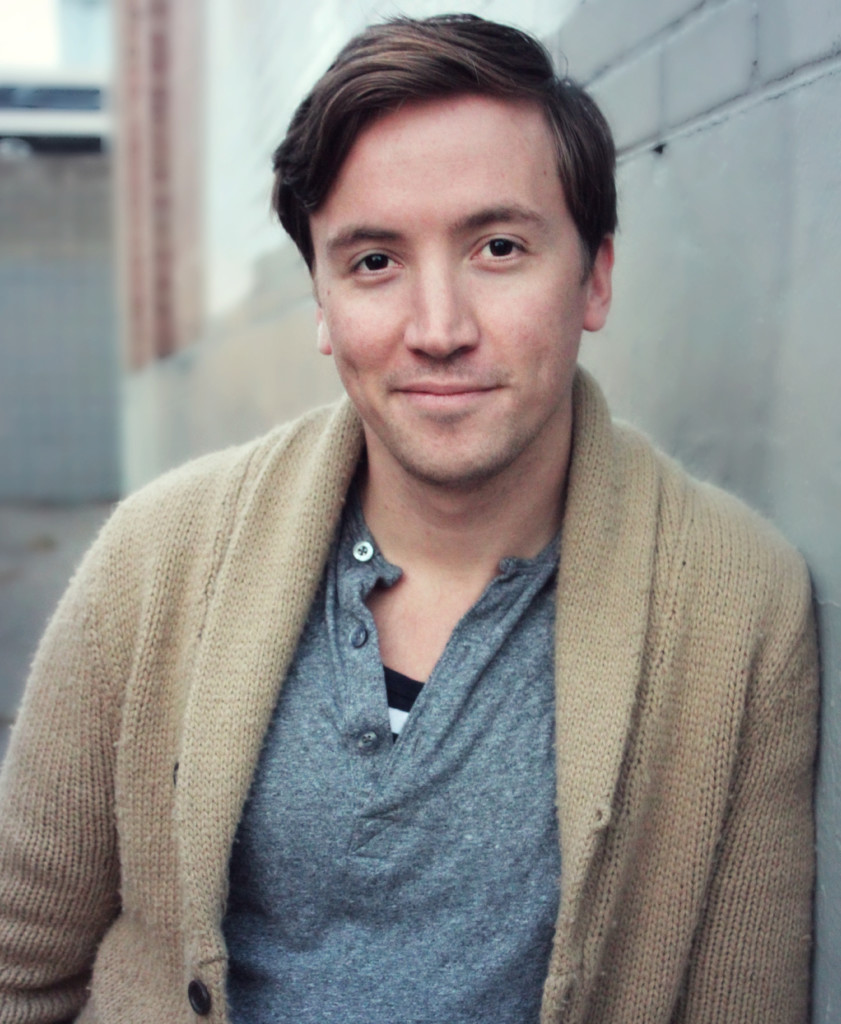 It was, in a strange way, a rare opportunity Dave received. How many of us have a chance to be tested like that? Perhaps we think we couldn’t do what Dave did. That we haven’t been heroic enough in our lives. But then who says you need to have lived a hero’s life to be a hero? Why can’t a hero be just another normal, flawed human being, a guy who likes hot wings and cold beer and chasing girls?

But, in Jump (April 5-15), a new play that will be produced by Plan-B Theatre and the Flying Bobcat Theatrical Laboratory, playwright Austin Archer raises similar questions but also expands the territory significantly for actors and audiences in challenging our capacity and capabilities to take and regain control for the right reasons. That is, to appreciate what we’ve may have missed previously in our relationships and to have the confidence to confront and overcome the demons, dangers and risks that limit or dilute the best sense of our humanity.

Jump is the perfect season ender to Plan-B Theatre’s subscription series for the 27th season, which has comprised works about leaps of faith – harrowing in historical significance as well as intimate in intense emotion. It is the fourth in the series of works by Utah playwrights 35 and younger, who were tapped as commission winners by the David Ross Fetzer Foundation for Emerging Artists (The Davey Foundation).

It also is one of the most challenging plays to produce in the Studio Theatre at the Rose Wagner Center for Performing Arts, a venue that serves well Plan-B’s unique expertise to realize place and form of narrative in compelling minimalistic production values. Many of the company’s original works typically are set in small, intimate interior spaces. In Jump, Archer offers a script that moves at a breathless, dizzying speed, alternating between the present and flashback moments that take audiences through the rapid descent from 12,000 feet above as well as smaller interior spaces, which will seem more familiar to regular Plan-B patrons.

And, as The Weird Play maximized the collaborative assets of Plan-B and Sackerson, Jump is poised to achieve its exhilarating potential with the partnership between Plan-B and the Flying Bobcat Theatrical Laboratory, an experimental group that finds ways to use movement, technology and design in its work.

Jump is directed by Flying Bobcat’s co-founders and co-artistic directors – Robert Scott Smith and Alexandra Harbold, who also have participated in various Plan-B productions. To create an enriched sense of the skydiving action, the directors have found ingenious ways to capture the theatrical effect of “jumping in and out of reality,” as Harbold explains. Smith says the combination of creative movements and the use of slacklines works “without going Cirque du Soleil.” 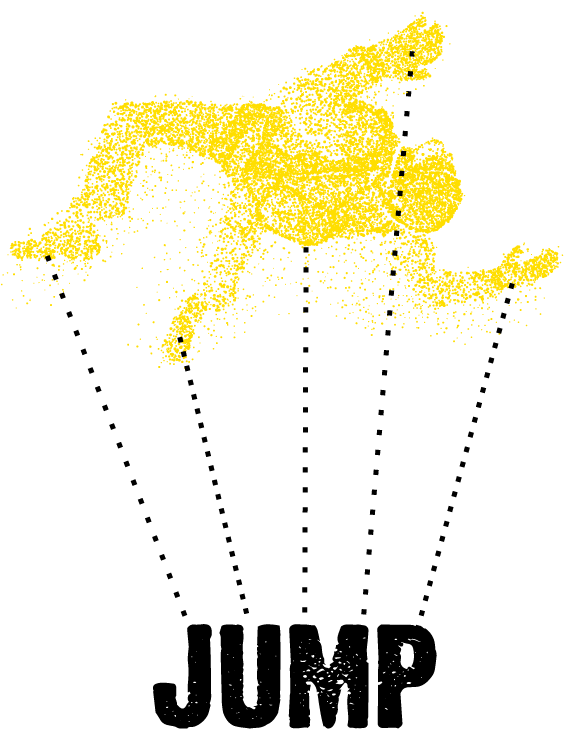 In fact, Smith and Harbold were inspired in part by a recent Ririe-Woodbury Dance Company performance of works by Alwin Nikolais, a groundbreaking choreographer who incorporated many theatrical elements into dance choreography. One of the most relevant pieces was Tensile Involvement, from 1955, where the dancers’ bodies appear initially in the most familiar way but they become increasingly distorted as the performers work with long streamers hanging from the ceiling and attached to the floor, spanning the wings of the stage.

To augment the scenic impact in Jump, Cheryl Ann Cluff, Plan-B’s resident sound designer, has worked up a soundscape that incorporates the roars of small jet enginers and the effect of air rushing at speeds of 120 miles per hour or more. Normally, once the parachute is deployed, the fall is quiet and serene. In the case of free fall, the swooshes and sense of breathless urgency take center stage.

Archer sets Jump with four on-stage characters. Erick Lewis is an experienced, cocksure skydiver who believes he can handle the traumatic effects of the tragic accident that opens the play. The hard-nosed Michelle Sealy is one of the attending physicians who track Erick’s recovery. Phil Cooper is a middle-aged wonkish man who values the elegant order of empiricism but there also is a strong emotional core behind the exterior of his persona that defies the rationality of numbers and statistics. Abigail Cooper is warm and generous in personality, a significant catalyst as the stories of all four characters unfold.

Archer’s script, which moves seamlessly through its short scenes at the crispest pace possible, is so tightly integrated at all points that previewing it comprehensively requires careful handling without spoiling the story. Alert audience members will catch the small, well-placed bits of foreshadowing backstory that culminate in the epiphanies synthesizing the stories of all four characters. In an interview with The Utah Review, he says that his one experience with skydiving did not end well. “I wound up in the hospital and couldn’t stop vomiting,” Archer explains, adding that he discovered that he had terrible motion sickness. He says that he always has been “weirdly fascinated” by stories of an individual’s final moments.

In Jump, Phil prepares for his first dive to celebrate his 60th birthday. Erick tells Phil how to position himself: “That’s it; you’re a rock star, dude! You’re gonna be great at this!” Phil is ready but he is breathing nervously and appears worried. He reassures himself by relying on his trusted empiricism: “It’s a very old technology so I’m not at all worried.” Phil is cautious, reiterating statistics and facts about skydiving to embolden his resolve to make the jump.

Erick’s confidence seems unshakeable. No inferiority complex appears to define him. At one point in the play, Erick describes himself as a “ridiculously handsome daredevil extraordinaire.” From that point forward, little more could be said about how Archer builds the narrative arcs for each of the characters without giving away the details of the narrative’s rapid build-up.

While Jump is Archer’s first professional production of a full-fledged work, the playwright also has worked as an actor, writer, choreographer and musician. His music also is incorporated into the production, especially in the moments before the play begins.

Archer has produced and recorded his music, available at his Bandcamp page. A 2017 album titled Corey Feldman features tracks with Archer performing nearly all of the vocals and instrumental lines. The album’s curious title refers to Feldman’s September 2016 appearance on the NBC Today Show, when the former child actor performed a song from his new album Angelic 2 the Core. The performance, which featured Feldman dressed in all black with a hood and with an all-female backup band, was criticized mercilessly on social media. Feldman said in several interviews that the brutal criticism stung but that no one deserves to be publicly shamed just because some don’t think the music is good enough for their tastes.

Archer’s album is empathetic to Feldman’s response and some of the tracks put forth precisely the sentiments that gird Jump. Despite the haters and naysayers, the courage to act and share one’s beloved passion means more than past criticism and disappointment. One of the tracks titled Taught to Lie contains a verse that is meaningful in Archer’s work and his new play: “… universal stranger until I die. I know my thoughts can’t be taught to lie.”

There also is an important bit of the late Fetzer’s legacy in the production, as shown in this video of the Mushman’s performance of Eddie’s Balloon on a Park City Television cable access show, which featured Fetzer on vocals. “I gave him [Archer] Eddie’s Balloon after we all met because something he said remind me of a lyric in the song. He listened to it over and over most of the night and I woke up to a series of emails detailing how cosmically connected he felt to the song, to Davey as a musician,” Jerry Rapier, Plan-B’s artistic director, explains. “He said, ‘the missing part of my play was David.’ So the song is now part of the sound design.”

Performances are slated to run from April 5 to April 15 on Thursdays, Fridays and Saturdays at 8 p.m., Saturdays at 4 p.m., and Sundays at 2 p.m. Tickets are selling quickly and several performances already have been sold completely. Tickets and more information are available at Plan-B Theatre.