Indispensability can be a challenging concept to articulate, especially for nonprofit arts institutions in communities where the arts are seen as an amenity rather than as an absolute necessity. But then there are those institutions which build upon their most successful and visible programs to cultivate deeper roots in their communities by offering activities and services that touch young people who otherwise might never gain access to potentially life-changing opportunities.

Spy Hop Productions, the nationally known youth media arts organization in Salt Lake City, will celebrate its 20th anniversary next year. And, it is embarking on a public capital development campaign to raise funds for its new permanent home, to be located in the city’s Central Ninth neighborhood just to the southwest of downtown. The neighborhood, one of the city’s most diverse and easily accessible areas especially for young people, is a perfect site for Spy Hop, which has worked conscientiously in prominent as well as quiet ways to demonstrate its indispensability to the community.

Many relationships have been nurtured over a long period. For example, some 15 years before Ken Verdoia, a veteran filmmaker and public television producer who joined Spy Hop’s advisory board after he retired in 2017, he made his first connection with students in the organization’s award-winning film program. It was a project about youth suicide, which impressed Verdoia. “They were sensitive and had the wisdom to use their voices and skills in a very powerful and mature way,” he recalls.

At KUED-TV (Channel 7) at The University of Utah, Verdoia always looked for new perspectives to engage audiences on complex community issues, including civil rights and drug abuse. When a team of students (Alex Mack, director; Chad Benton, cinematographer) in Spy Hop’s PitchNic film program premiered their short documentary Mother Superior in 2005, Verdoia arranged for its broadcast on KUED. To illustrate the extent of the meth epidemic in Salt Lake City – which ranked third in the nation at the time for meth use among women – the students followed the stories of mothers who were addicted. The students did not distill nor sanitize images showing the damage of sustained drug abuse, as shown in one particular scene filmed in a dentist’s office.

The film attracted local and national attention. Salt Lake City police used it for educational programs about drug abuse. The film was accepted for the juried Los Angeles Film Festival, indicative of the strong quality for which impassioned mentors and students were capable. To wit: Nearly 95 percent of the films in PitchNic’s 15 years have gone on to screen at film festivals nationally and internationally.

Mother Superior set the bar for other outstanding short documentary films of broad civic engagement, including the 2011 Even Handed (Samantha Highsmith & Gabriella Huggins). The film screened at festivals across the country and won numerous honors including best documentary from Westport Youth Film Festival and recognition from the United Nations Plural + Festival. Even Handed explored why a straight teen believes it is important to advocate for gay rights.

Verdoia later commissioned other Spy Hop students to make short films featuring personal stories about civil liberties and rights that were part of Navigating Freedom, the Public Broadcasting System’s (PBS) national documentary outreach on the topic. The quartet of Spy Hop short documentaries earned a Regional Emmy. Long before the nation tuned in to see high school students organize protests in the recent Parkland, Florida shootings at Stoneman Douglas High School, Spy Hop students were learning to hone their creative powers of expression. “Never I have been so optimistic about our next generation of young leaders learn so skillfully the advantages of the democratization of media devices and techniques,” Verdoia adds. “Spy Hop does not operate like a technical or trade school. It is the model school of engagement.” 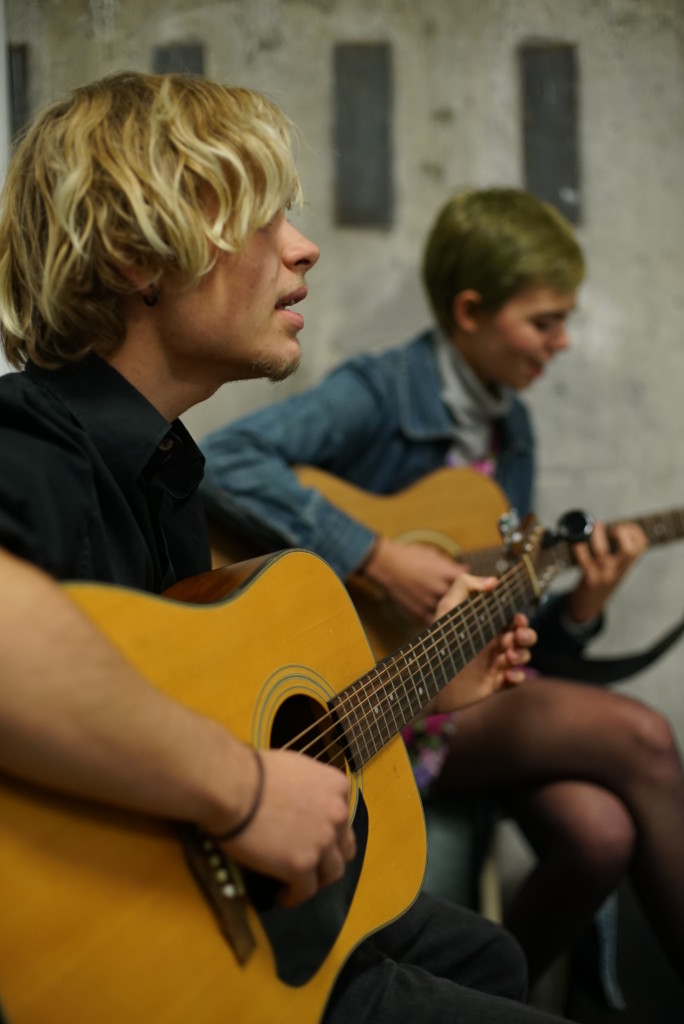 Civic connections are essential, noticeably in projects that give at-risk youth a chance to express themselves in meaningful ways. ”Spy Hop provides a unique niche in preventing risk factors and promoting health in our schools and communities. People say Spy Hop is outside of the box, but what they do isn’t really outside of the box, it’s common sense. It’s relevant,” Jeff Smart of Salt Lake County Prevention Services says. “That’s the probably the most innovative thing about what Spy Hop does. They promote healthy choices and life skills in a structure that is truly relevant to the population they serve.”

Smart adds that Spy Hop is a leader in the county’s contracted provider network, especially in helping organizations stretch the value of their limited resources. In 2017, Spy Hop instructors worked with the UNI Girls Transition group, ARTEC Day Treatment, the Gemstone Program, the Transition To Adult Living Program and the summer program with Salt Lake County Boys & Girls Group Home. The youth, ages 12 to 18, created numerous multimedia projects, including video poems, shadow puppet media and original music along with podcasts.

Jodie Horgan, of the county girls and boys group home, says that participants earn their right to go once a week to a Spy Hop podcast workshop or media class. “What has been really great is that the Spy Hop staff tells the kids that they can say whatever is on their mind and that they are in a safe place to say it,” Horgan says. The media content they create is published with a pseudonym, as a protective measure. While some students hesitate to go too deeply about personal stories, others take advantage to produce podcasts on topics adults would be challenged to articulate authentically. One was about self-harming while another focused on the dilemma of a trans student trying to conceal the transitioning process from others after a difficult interaction with their adopted family.

Spy Hop’s multidisciplinary strengths serve purposes at every major level of community development. Virginia Pearce, a former Spy Hop staff member who now heads the Utah Film Commission, says the organization contributes to the state’s film industry which has surpassed the $100 million mark and continues to expand. “Spy Hop is, as much as Sundance, helping to create a strong culture of filmmakers,” Pearce says. “They encourage a workforce pipeline, as former students are available to work on film and television projects that come to Utah. They are agile and can adjust on the fly to any production demands.”

Pearce says Spy Hop mentors ensure the students, who are making their first career films, get the most out of the experience. Likewise, mentors stay active in the industry. Most recently, Spy Hop staffers Matt Mateus and Jeremy Chatelain produced the soundtrack score for Quiet Heroes, a documentary about two health care professionals who were the only caregivers for AIDS patients in Utah during the 1980s. The film premiered to packed audiences at Sundance earlier this year.

Spy Hop alumni also have worked in the organization’s Phase 2 Productions, which handles in-house video creative services for corporate and organizational clients. One prominent example is Ballet West, a nationally ranked performing arts company “In 2014, we put out a request to create a video for our training academy, and we were impressed by their proposal which brought a fresh student experience to the table,” says Sara Neal, Ballet West’s chief marketing officer. “It was exciting for me to see this collaboration from one nonprofit to another.” Since then, Ballet West regularly hires Spy Hop to produce television commercials and other promotional videos, items that most performing arts companies might normally consider using for-profit public relations and marketing firms.

For Martha Taylor, the internship coordinator at The Academy for Math, Engineering and Science (AMES), located at Cottonwood High School in Salt Lake City, Spy Hop’s programs have been a godsend. The school’s resources and curriculum do not afford sufficient STEAM opportunities for students – that is, to put the creative piece of the ‘A’ (art) that connects directly to a STEM (Science, Technology, Engineering and Mathematics) interest.

Typically, she must place 125 students each year into internships and with Spy Hop, she has managed to have between 10 and 15 students each year satisfy their requirements. “Spy Hop really gets teenagers,” Taylor says. “With teens, there always are, understandably, quirks, intense emotions, and lots of stresses and fears. They also sometimes procrastinate. But virtually every student who has finished a Spy Hop experience says it was something they would do again.”

Taylor recalls one student seven years ago who struggled to find an internship, as her requirement. “She couldn’t connect to anyone at school and she always kept herself apart from the diversity that characterizes our students,” she explains. Her attitude, however, changed after completing a Spy Hop film class. Taylor says she now works for a television station in the Midwest.

For two students with academic difficulties, Taylor found Spy Hop’s Resonate: Hip Hop Production program as the effective way for helping them see the value of reading and storytelling as well as building their confidence to speak up in the classroom.

Taylor finds Spy Hop’s Power Up! Game Design Lab a potent option for students to excel in unanticipated ways. For example, Empower Stars!, a prototype mobile video game was developed for children with cancer, ages 7 to 14. In last month’s Frontiers in Pediatrics journal, the findings summarized the game’s value as a “novel approach of directly coupling physical exercise with promoting personal empowerment over cancer using a mobile platform.” The game has been patented and research was funded by The University of Utah’s department of pediatrics and Tech Ventures.

Taylor says Spy Hop’s mentors go well beyond teaching the students how to code. “They teach the soft skills – teamwork, negotiation – that are so important for students as they look toward their careers,” she adds. And, having Spy Hop’s game design program gives an option to students at AMES, a Title I school, who might otherwise not be able to pay expensive tuition fees to gain such valuable hands-on experience. Spy Hop mentors work with students and their families to resolve problems, if students cannot afford to pay registration fees.

One of Spy Hop’s strongest corporate collaborators has been Adobe, which makes Creative Suite and other tools students use in the classes and workshops. “We learn so much from how they create with an inclusive community in mind,” says Lisa Pedee, program manager for Adobe’s community engagement. “For us, it is enlightening to hear them share their experiences and then to make the connection between problem solving and the actual process. This is so important to our design teams.”

Pedee says the engagements extend to other corporate departments, including legal, sales and marketing. “It gives everybody a new sense of empathy for the young people because they are excited and ask so many good questions when we meet,” she explain, including youth panels focusing on design career options at Adobe. Many activities take place at Adobe’s Lehi, Utah offices. Pedee says so many of Spy Hop’s students already are so aware of technology and what the industry is doing, “we find it so natural to collaborate on new ideas so nothing ever becomes stagnant either for Spy Hop or for Adobe.”

Ground will be broken for Spy Hop’s new home in September. The building, which is expected to open in the fall of 2019, will meet, if not exceed LEED Silver Standards and will incorporate solar panels, thanks to a grant from the Rocky Mountain Power Blue Sky Program. Lead gifts in support of Spy Hop’s Media Arts Center already have come from the State of Utah, The Katherine W. Dumke and Ezekiel R. Dumke Jr. Foundation, Larry H. Miller & Gail Miller Family Foundation, The Redevelopment Agency of Salt Lake City, Spy Hop’s Board of Directors, Advisory Board, and Capital Campaign Committee, and The Meldrum Foundation.