Shortly before the 2008 presidential election that put the first American black president into office, Jeff Deutchman used social networks to ask amateur and professional independent filmmakers to document experiences of voters and campaign volunteers on the day of national voting.

“It was an experiment in crowd-sourcing footage and material for a documentary film about an historic event,” Deutchman says in an interview with The Utah Review. The experiment proved to be quite successful, even though he put out his first call for filmmakers just two weeks before the election. The documentary 11/4/08, which was released in 2010, is a worthwhile time capsule even as it features Obama supporters more extensively in the collage of footage than those who supported Republican presidential candidate John McCain.

Eight years later, Deutchman followed his instincts about the 2016 elections and started much earlier – six months in advance of Nov. 8, 2016 — on executing a similar documentary approach for election day. He had some built-in advantages. Social networking and digital media tools had advanced in the intervening eight years to ensure that the documentary would be a better representation of the full political spectrum that was in play with the 2016 presidential race.

With backing by The Orchard and other crowd-sourced support, Deutchman recruited more than 40 filmmakers, including Daniel Junge, director of Being Evel, a 2015 film about America’s most well-known daredevil and Alison Kayman whose 2012 documentary about Ai Weiwei is one of the best films about the artist’s courageous career. Others included Elaine McMillion Sheldon, who won a Peabody in 2013 for her documentary Hollow, an interactive narrative featuring Appalachian residents who talk about the prospects and challenges of rural America, along with Martha Shane, whose documentary film After Tiller, co-directed with Lana Wilson, was screened on POV, the Public Broadcasting System’s signature series.A bonus was that people across the country viewed the livestream raw footage from the filmmakers on Periscope throughout election day (and, as expected, disappeared the following day).

The resulting film 11/8/16 is a far superior documentary to the original experiment. It features 16 subjects in an impressively balanced sample of the political spectrum that defined the election. The film, which is scheduled for nationwide release on Nov. 3, will be screened in a free, public program by the Utah Film Center on Oct. 24 at 7 p.m. in the City Library auditorium in downtown Salt Lake City.

Deutchman will be on hand for a post-screening discussion. He will be joined by Duane Andersen, a co-director whose footage about the Evan McMullin presidential campaign in Salt Lake City is included, and Calene Van Noy, a McMullin supporter who also appears in the film.

The film weaves the 16 stories marvelously, capturing a Hitchcockian sense of tension and anticipation of the outcome, spanning the early morning hours of election day and the late-night reports of the ballot counting. It rings authentically, a major achievement of editing given that Deutchman revisited countless times the volume of footage he received from the filmmakers – more than 300 hours of content. “It was like reliving election day over and over again,” he adds.

Andersen, who was introduced to Deutchman through a mutual colleague, says in an interview with The Utah Review that he originally intended to follow Misty Snow, the transgender candidate who was nominated by Utah Democrats to challenge incumbent U.S. Senator Mike Lee. Meanwhile, another filmmaker in Utah was following a Trump supporter in the Ogden area. “When I realized that Misty’s story might not be the most pertinent to the national story line, I passed on it. And, then one week before the election, on Nov. 1, I was connected to Calene [Van Noy] on the Facebook campaign page for McMullin.”

It turned out to be a serendipitous choice. Andersen, who teaches digital media production at Utah Valley University, says he identifies as liberal and as a Hillary Clinton supporter. In the film, McMullin’s supporters explain they could never support Donald Trump because his values conflict with their sense of respect and decency. And, they identify as conservatives skeptical of Clinton’s promises and ideology.

Sheldon followed a Trump supporter in West Virginia, a fire boss in an underground mine, and his family. The filmmaker went through safety training prior to election day so that she could follow Eric [the miner] at his worksite. Some of the footage shows the family watching the election night results. Sheldon, who grew up in the state and whose family included miners and workers in the logging industry, captures the fears of economic uncertainty and abandonment the family believes is happening to its community. It is evident that the family’s support for Trump is more about not being able to trust his opponent. 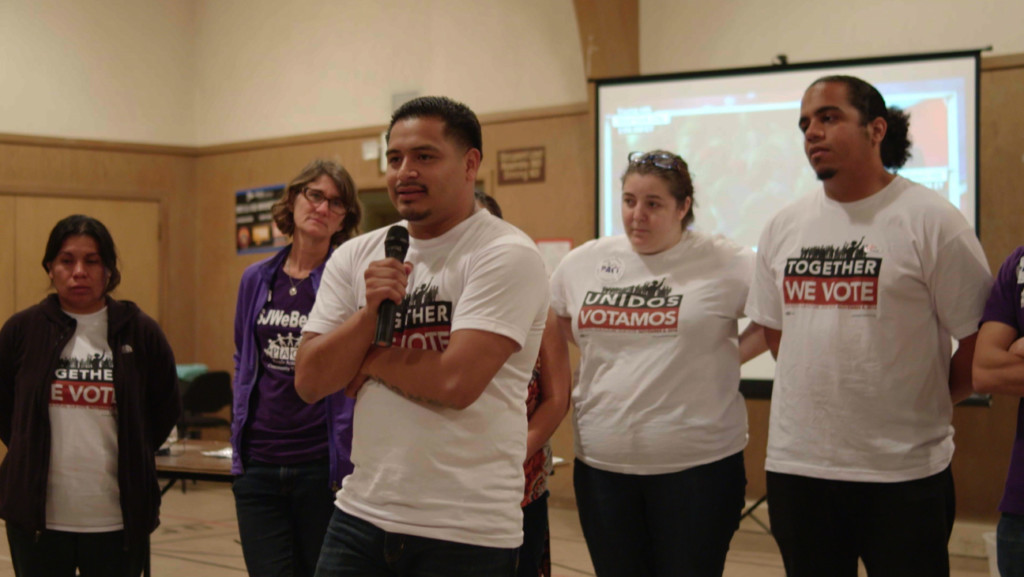 In one of the film’s strongest subject treatments, Shane went to San Jose to follow the story of Jesus, a DREAMer and an organizer for PACT (People Acting in Community Together), a non-profit which works on issue advocacy rather than supporting a particular candidate for office. Jesus and others seem optimistic about the future, confident that Clinton will be elected. However, as the results begin to show a different outcome, Jesus’ optimism is first tempered but then harsher realities settle in, with some of the community members feeling more than emotionally shaken at the results. Nevertheless, Jesus is resilient in his perseverance, at least encouraged that the issue propositions they campaigned won voter approval.

The film’s subjects convey so many different emotions and political perspective, from the socialist in Vermont and a Sikh cab driver in New York City to a homeless man in Honolulu who decides not to vote and an Alabama man who is voting for the first time in more than 30 years after being exonerated and released from death row confinement in prison. One of the more curious subjects is a couple in Massachusetts, who exhibit contrasting levels of enthusiasm for Trump. The wife is skeptical even as she casts her vote but she pleads repeatedly with her husband to take off his Make America Great Again cap. 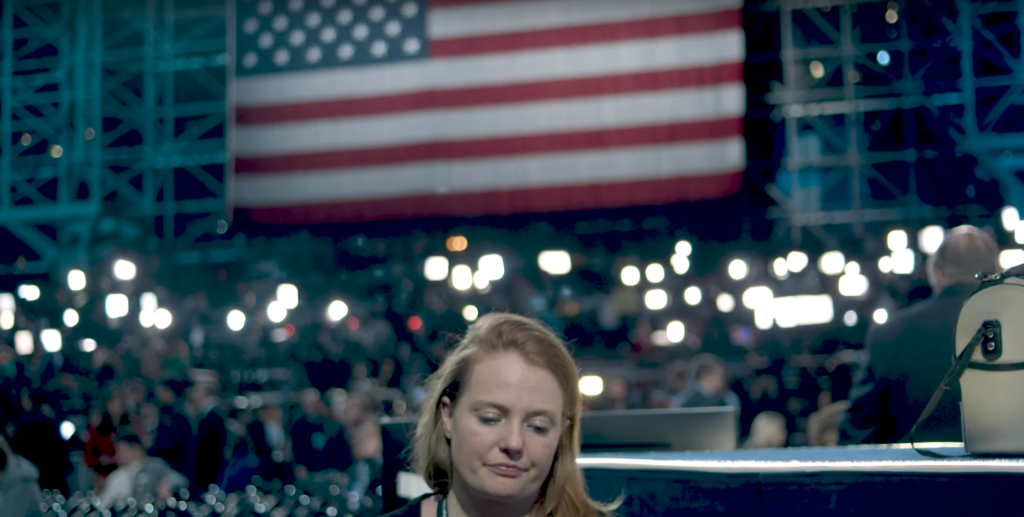 Rightfully so, Deutchman sees the film’s style as a valuable counterpoint to the temptations of echo chambers and the typically impulsive reaction to score cheap points in the political dialogue. It is the type of film that historians will revisit 50 years from now, as they begin to situate the perspective for writing about this period in American politics.

With two of these election day documentaries completed, Deutchman describes the cinematic experiment as “Boyhood for America,” referring to the 2014 film directed and written by Richard Linklater, which covers the formative years of a boy from ages six to eighteen.

Curiously, some viewers are unsettled by watching others on screen who share their political beliefs. “It’s like some people who don’t like hearing their voice play back on tape,” he adds.

Andersen is especially proud of a shot of the top portion of the Salt Lake City temple for The Church of Jesus Christ of Latter-day Saints, which made the final cut for the film. “We were asked to get an iconic shot of our location and we wanted to include the temple, which we were able to get just before church security asked us to leave,” he adds.