In his marvelously creative eye, artist Kevin Sybrowsky always sees a charming, witty story in every metal piece he makes. Scouring antique shops, thrift stories and businesses which his network of friends and colleagues alert him to check out, he sees the potential in every item he collects even before he decides how to upcycle it into art work. This includes canisters from old-style vacuum cleaners, an early 1900s vintage laminator with a 15-inch gauge and stainless steel plates with a width that is impossible to find in any contemporary device.

No two art pieces are alike, not only in visuals but also in their accompanying stories. Juan The Tortuga’s body is a 1940 Hoover Flying Saucer Vacuum with a nose fashioned from a bumper guard collected from an old Cadillac and legs and feet from an old claw-foot bathtub. He comes complete with a vintage air horn. DUIEE is currently unable to drive because he was caught driving under the influence. With a body made from an automotive spring, he wears a vintage clamp on roller skates and his tail is a coil from a small moonshine distiller. He comes equipped with finial legs and lug nut toes but as Sybrowsky adds, “He always wears his art to share his love.” 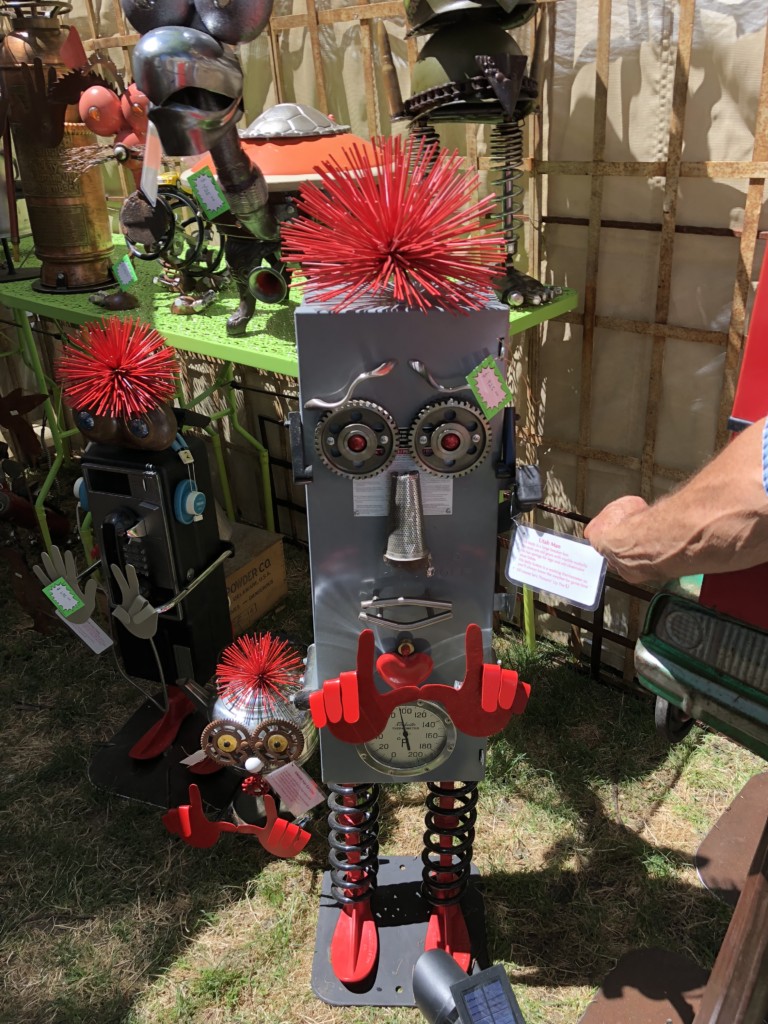 There are plenty of heartfelt touches in Sybrowsky’s work a/k/a Nivek Metal Art. This is the second appearance for the Salt Lake City artist (Booth 48) in the Utah Arts Festival’s Artist Marketplace. He had applied unsuccessfully for more than 20 years and had managed in recent years to be placed on the waitlist, which allows artists to go into the Marketplace if a previously accepted artist has to withdraw for any reasons. Sybrowsky is pleased to be in the festival, adding to a growing list of festivals and shows he has participated.

His art enterprise is a family affair, aided primarily by one of his sons, Kabe, 27, and his wife, Jana, who just recently retired from her full-time job. Sybrowsky had worked full-time as an entrepreneur but decided, as he explains, to take on the “Mr. Mom” role when their children were small so his wife could continue working full-time and have the benefits on hand for the family’s insurance needs. 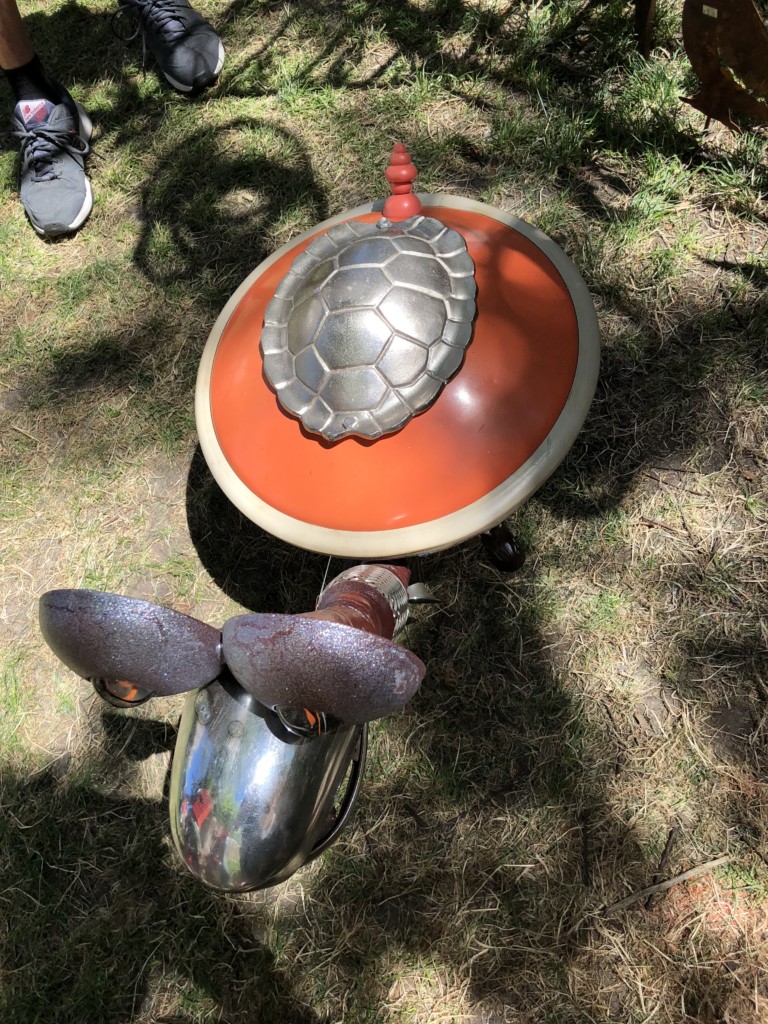 Meanwhile, the family purchased the property on where the former Highland Drive-In Theatre operated and Sybrowsky decided to build greenhouses, which were kept up by family members including his mother. The greenhouses provided bedding plants for customers, which meant that they typically were sold out by Memorial Day.

This is when Sybrowsky decided to apply his welding skills to creating ornamental artworks, including trellises. As a kid, he learned “how to fix anything” from a neighbor who had a full-fledged work shop at home. In his younger years, he and his friends had perfected the craft of turning old Renault compact cars, which had a tendency to suffer cracked engine blocks, into dune buggies and sell them at $25. Eventually, he was encouraged by customers and others to take his pieces to art shows, which he did, starting in Tempe, Arizona. As the popularity of his art expanded, he gradually moved to deemphasize the family greenhouse business, which took some time because his mother insisted on sustaining it up until the time she became too ill to continue.

Sybrowsky’s artistic ethic is based on his work ethic, as he explains: “There are fast jobs and there are good jobs but there are no fast, good jobs.” Sybrowsky’s art pieces evoke his sharp perception in seeing potential for translating something quite ordinary into creative substance with affirmative meaning.

Years ago while watching an episode of the American Idol reality competition series, he noticed Paula Abdul, one of the original celebrity judges, wearing a heart-shaped pendant that embedded the classic peace sign symbol. It inspired him to recreate it as an art piece with the title of Heart of Inner Peace. 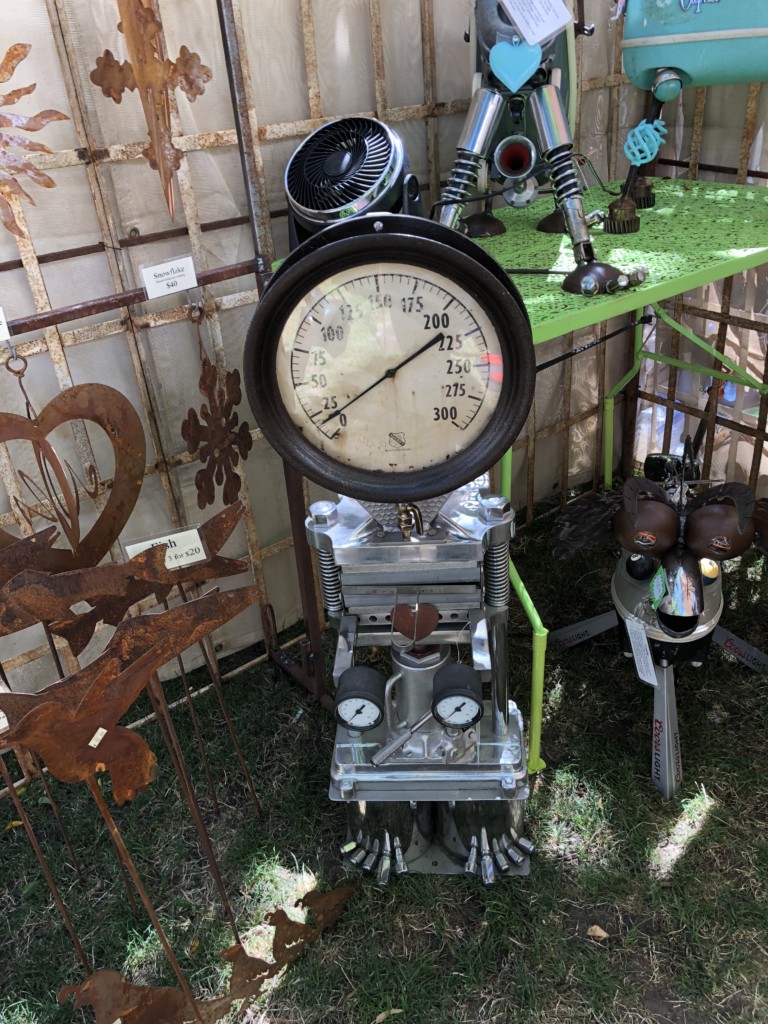 He his continuously more ambitious in his pieces. Mr. Model T’s body comes from a vintage Electrolux vacuum and Chevy bumper guards make up his nose. His front legs are motorcycle shocks and his toes are lug nuts. Look closer and notice the vintage pool balls and the insignia from the 2002 Winter Olympics Games that Salt Lake City hosted. On his back rests an old promotional item, a Model T coin bank and his belly contains a vintage air horn.

The Utah Man would be perfect for any University of Utah fan. A large breaker box comprises his body and his eyes are old gears with marble eyeballs, while springs make up his legs along with vintage shoemaker shoe lathes. A clever touch is a working thermometer for his belly button and it records the temperature. And, as Sybrowsky notes, “Of course, he’s throwing up the U.” 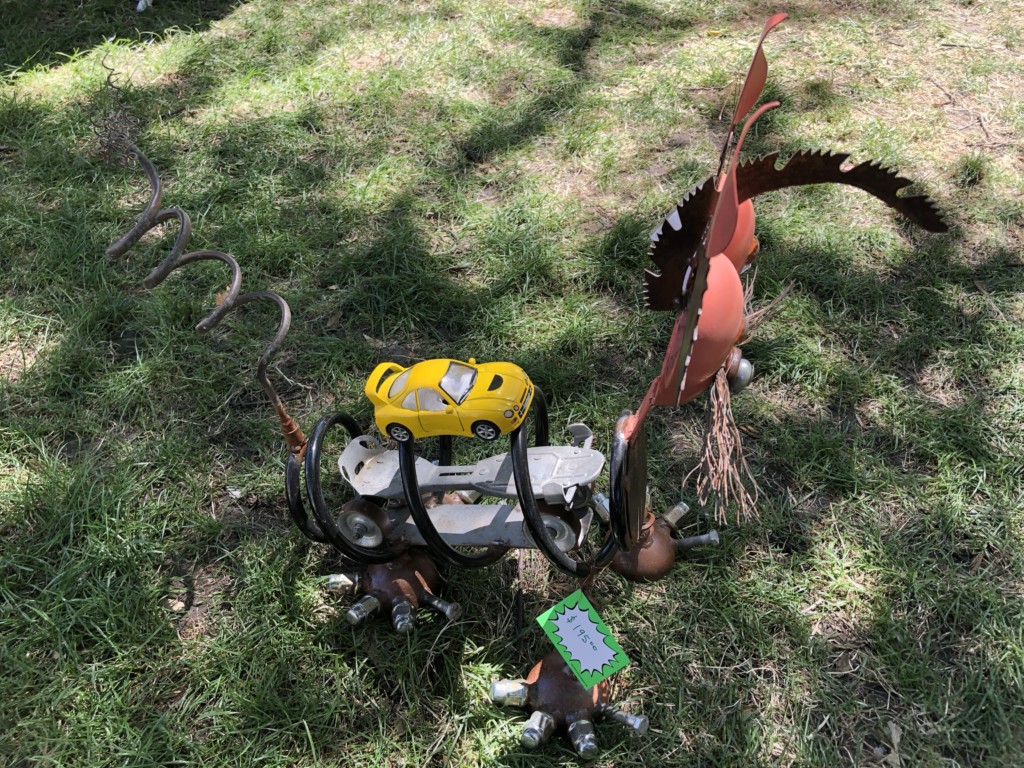