Opening day headliners for the Utah Arts Festival include popular local bands along with the inaugural headliners for the festival’s new Arts Amplified Concert Series. Ron Pope will open at 8 p.m. on the Amphitheatre Stage, followed by the British band Gomez at 9:30 p.m. For a feature interview with both musical acts, see The Utah Review’s recent article.

Bandaloop, the vertical dance company from Oakland, California, performs twice daily on the 240-foot-high curving glass façade on Library Square (5:30 p.m. and 7 p.m.). The Bboy Federation begins its full weekend slate of performances and competitions in The Round at 6 p.m. 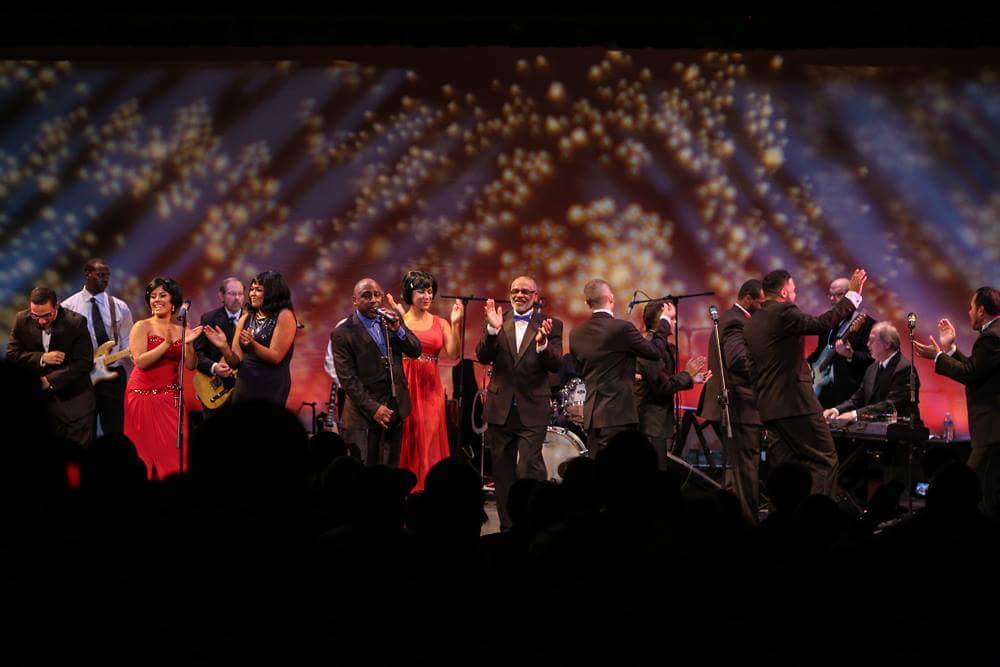 Other opening day highlights include:

In 2014, the group won the People’s Choice Award for music headliners at the Utah Arts Festival and the group, encompassing musicians and vocalists from many locations of the Salt Lake City metropolitan area, will certainly set the right mood for the weekend. Darrell Braham assures the group will also wear the wigs and costumes that have accented the crowd appeal of their tribute performances.

The group’s repertoire continues to highlight some of the best Motown artists, including Marvin Gaye, The Supremes, Tammy Terrell, Mary Wilson, Stevie Wonder, Marvin Gaye, Martha Reeves and The Vandellas as well as Sam Cooke, James Brown and Jackie Wilson. 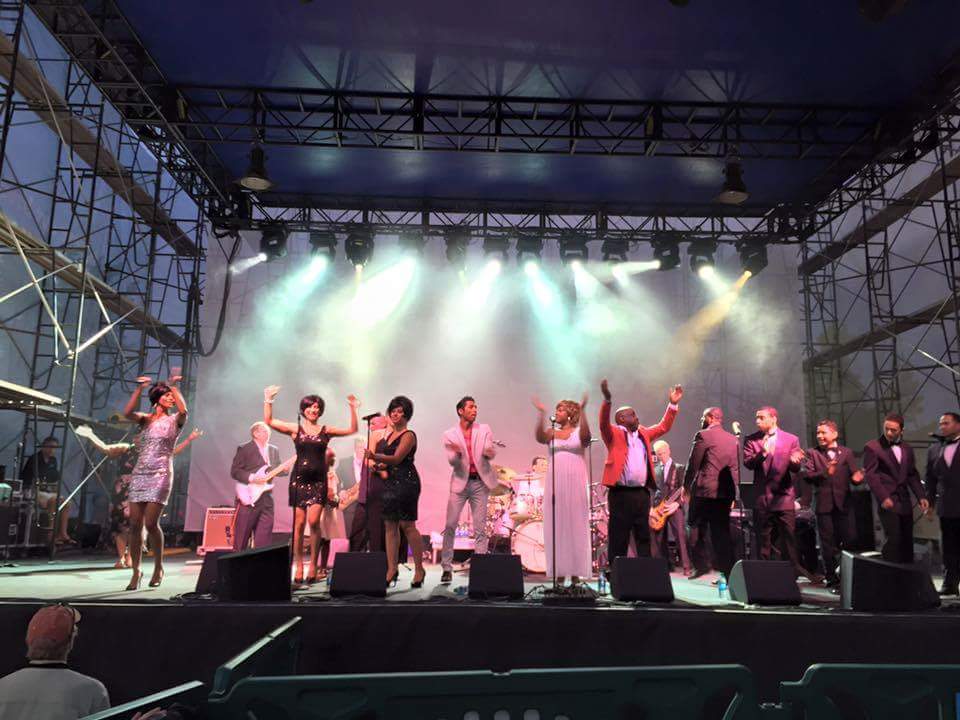 The band’s first major high profile performance was at the Egyptian Theatre in Park City. That was followed by sold out shows at The State Room, Rose Wagner Center for Performing Arts and the grand opening of The Fallout venue.
Braham, for example, who comes from a diverse background including gospel and performances in Utah as well as the San Francisco Bay area, is known for his renditions of Same Cooke songs. Deacon Gregory Lang brings the “old school” feel of Motown to the performance, along with his own long history of gospel vocals. Decaon covers Gaye, The Temptations. Gladys Knight and the Pips, as well as songs by Smokey Robinson and the Miracles.

Tazia Bertagnoli-Venstra is the definitive female vocalist for the band, covering Terrel and Reeves. Other members of the Lang family are highlighted including Da’Jon Lang, who takes on the duties of Jackie Wilson songs as well as those by The Temptations’ David Ruffin. Tanisha Lang, who grew up singing in a church choir, covers Diana Ross and The Supremes.

Other opening day performances include The Green Leefs (Park Stage, 7:20 p.m.), a band well known to attendees at the annual Reggae Rise Up Festival in Heber City, Utah, which is held every August. The Green Leefs merge numerous influences including west coast roots, reggae, hip and R&B. The band’s vocals are complemented by electric guitar, saxophone and percussion and rhythm section. Scheduled before The Green Leefs on the Park Stage will be Ginger and The Gents (4:45 p.m.), a rock and roll bland with a blend of contemporary soul and Westward (6 p.m.), a pop rock trio that formed in 2013 and whose music has been dubbed as “Cowboy Space Rock.” 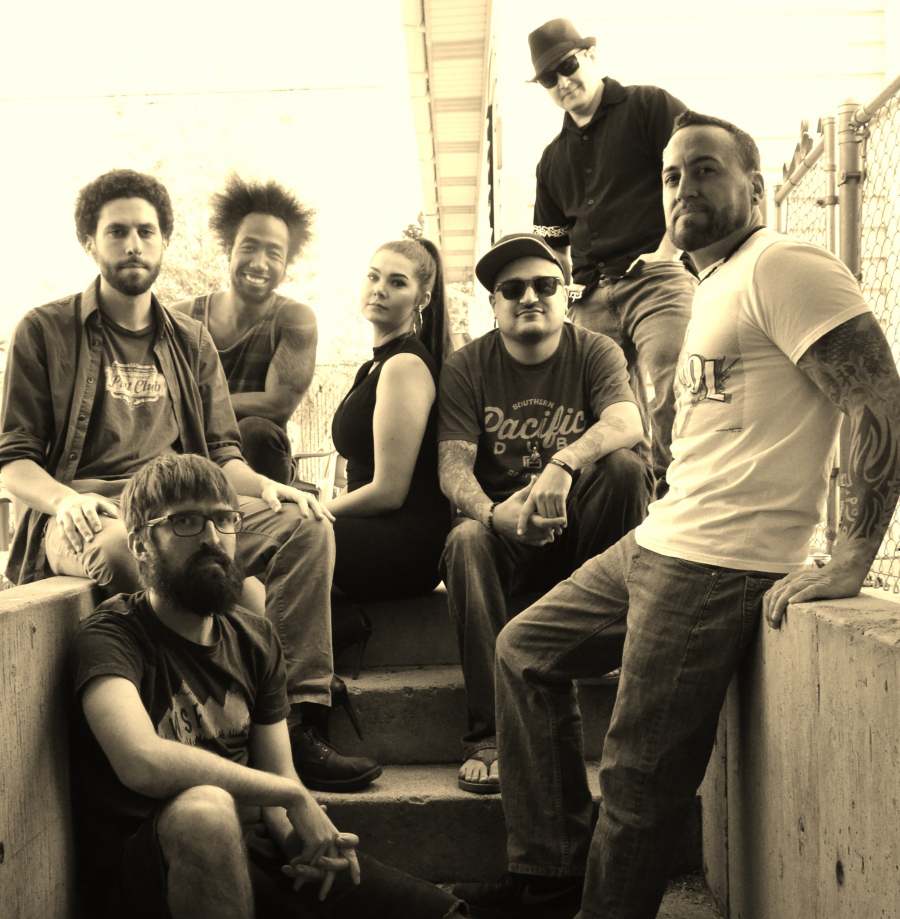 The Garden Stage on the west side of festival grounds has a full day slate, starting with Wing & Claw (noon), a locally based cello-and-guitar duet. Genevieve Smith plays cello and James Miska plays guitar, and percussion with his feet on a suitcase and tambourine. The songs are polished originals with a strong Americana roots feel. Others include Rosewood (1:30 p.m.), a trio featuring eclectic styles with singer-songwriter guitarist Shaundra Cragun, vocalist Angela Cooney, and folk and bluegrass artist Mike Iverson, and Luci (3 p.m.), also an eclectic style trio. Vann Moon (4:15 p.m.) offers folk-oriented rock, while The Fab Folk (5:45 p.m.) is an acoustic duo highlighting Beatles songs with a folk/bluegrass twist.

The Salty Cricket Composers Collective (7:15 p.m.) is followed by Buffalo v. Train (9:15 p.m.), a collaboration of Kate MacLeod, Michelle Moonshine, and Salt Lake locals Triggers & Slips’ Morgan Snow and John Davis. MacLeod also will lead many of the workshops on June 22-23 for the Intermountain Acoustic Music Association’s songwriting academy, which will be held in the City Library.