In Hindsight, Sackerson’s premiere of Morag Shepherd’s newest play that is performed in the heart of downtown Salt Lake City at indoor and outdoor locations, Ford (Connor Nelis Johnson) and Chase (Tyler Fox) compete to win the heart of Lorraine (McKenzie Steele Foster).

Two men could not be more different. Ford is playful, unabashedly romantic and occasionally corny but always generous in gestures. He is enterprising, working in agroforestry to train farmers in the art of beekeeping. Ford is confident but never arrogant. We hear of his plans to go to Gambia for a Peace Corps assignment. 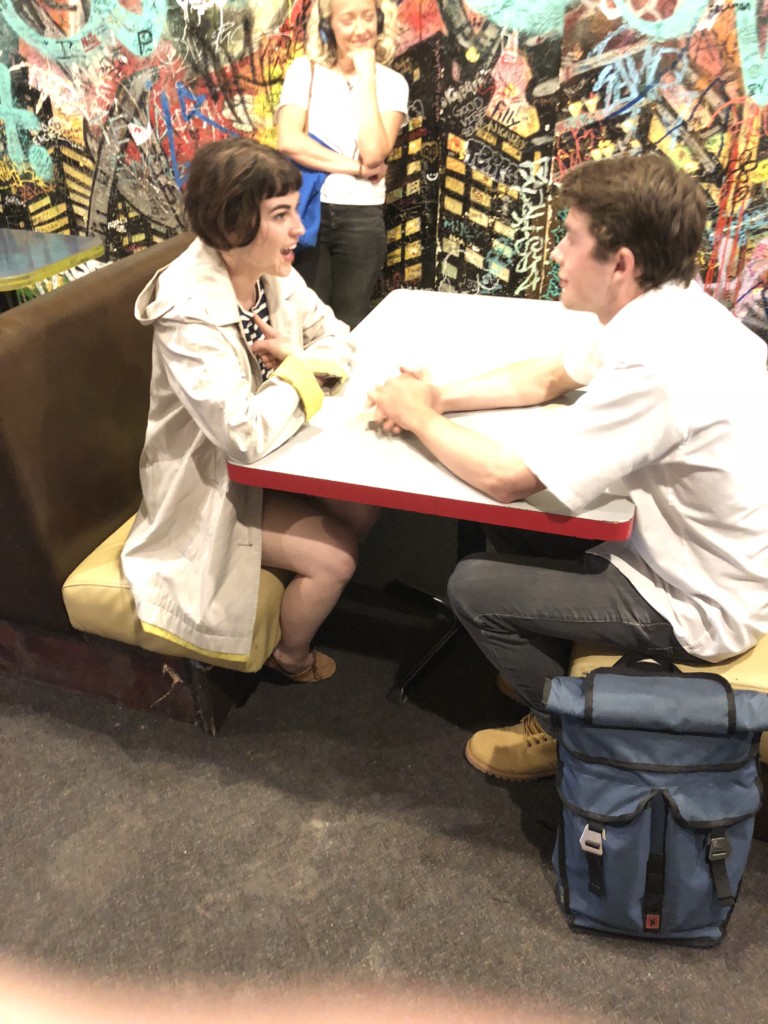 Chase has some admirable qualities but he also is conflicted about how much he really should let down his emotional guard. There may be family ski trips in Park City but we also learn that his father has problems with controlling his anger. Lorraine recalls how she first fell in love with Chase. He could let his own delicate emotions and vulnerabilities come through occasionally but Lorraine wonders for what purpose he was doing it.

In the first scene, the small audience of a half dozen people (deliberately kept intimate in this unique no-proscenium style of theater in the open) boards a Utah Transit Authority bus on State Street, adjacent to the Temple Square plaza. Look to the west and there is a beeline view of the reflecting pool and the home temple of The Church of Jesus Christ of Latter-day Saints. 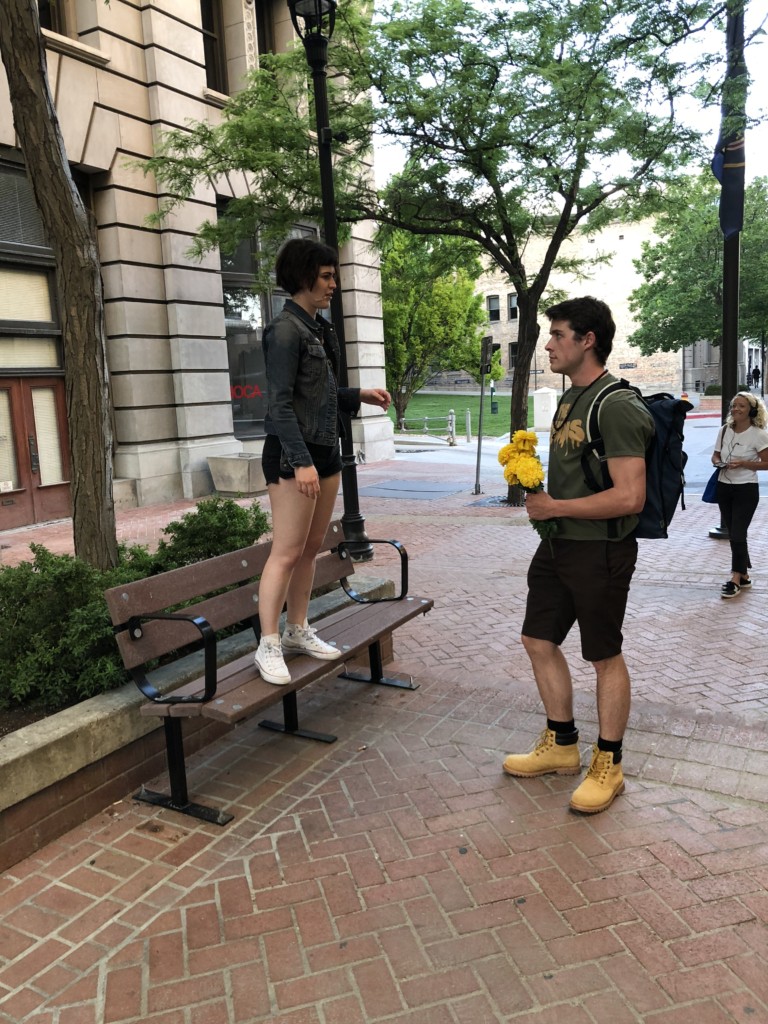 Lorraine is on the phone with a friend. She tells her that Chase is about to propose. Her friend responds, “There’s a time to be a child, and there’s a time to put away childish things, and be a man.” Lorraine says she is on the bus because she just had to go. Where is she going?, her friend asks. Lorraine says, “I’m going to keep going forward so that the question is never asked.”

From that point, Hindsight blossoms into an enchanting, bittersweet, gentle, humorous theatrical adventure that showcases Sackerson’s consistently exceptional skills at experimenting with form and production. This show also is produced by 3 Irons, based in Salt Lake City. Directed by Alex Ungerman, the cast excels at animating a straightforward romantic comedy at various locations along a 1.5-mile path, creating one of the most unforgettably endearing theatrical performances of the year.

The logistics seem so simple, but this style of production requires solving many challenges of timing, pacing and performances that reverberate with the same emotional intensity that would occur on a conventional indoor stage. Sackerson checks off every item on the list with outstanding results. Before audience members board the bus in the downtown free fare zone, each is given a set of Skull Candy headphones that provides clear audio for the music and the actors’ live performances which are miked. 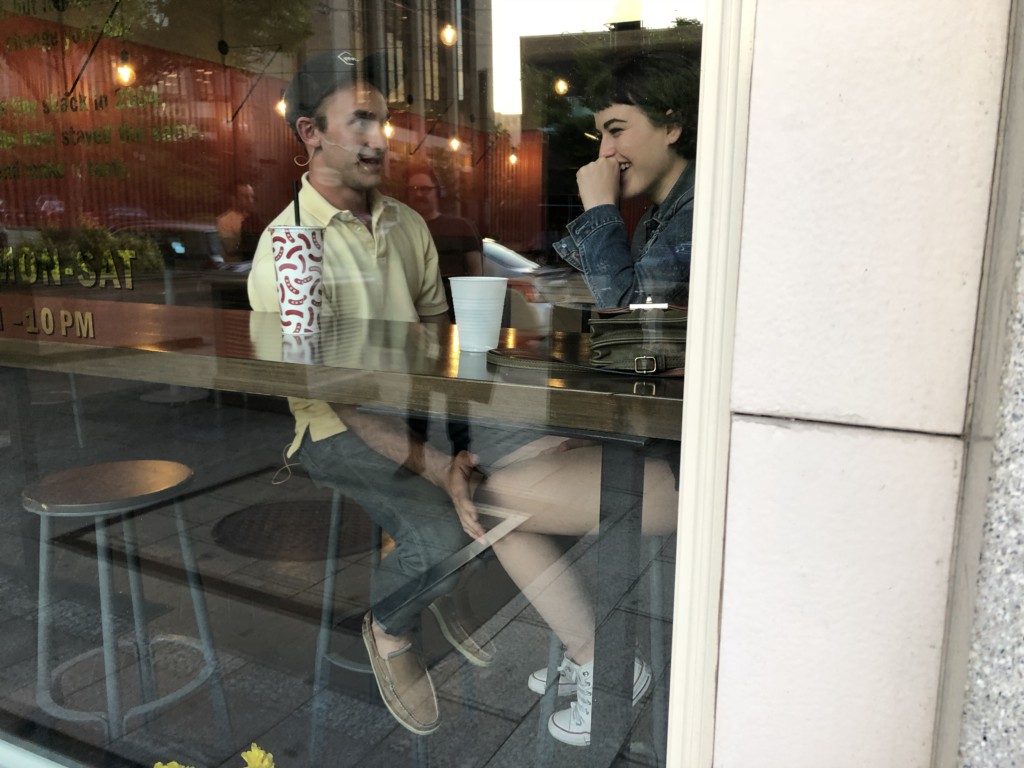 The bus scene is this wonderful bit of controlled chaos as audience members and the supporting crew find their way in a new theatrical experience. We clearly hear Lorraine’s phone call with her friend even as passengers board and disembark at every stop, which is announced publicly over the intercom. It is as natural as one would expect. Everyone just blends in beautifully.

Four blocks later, audience and the small crew leave the bus and Lorraine dashes to the next location. Throughout the play, all three actors rush ahead of the audience, finding corners or alley spots to change wardrobe. It is impressive to see just how many different outfits and shoes the actors wear throughout the 90-minute play.

The next scene takes place in the Pie Hole restaurant on State Street, a funky pizza parlor that is busy any day of the week. Ford and Lorraine are sitting in a booth, and the audience fans out, deciding on their own where to observe the action and getting as close as possible. It’s exhilarating to see how often one could be within three or four feet of the actors. Meanwhile, customers carry on as usual, although a few are intrigued by what is happening. 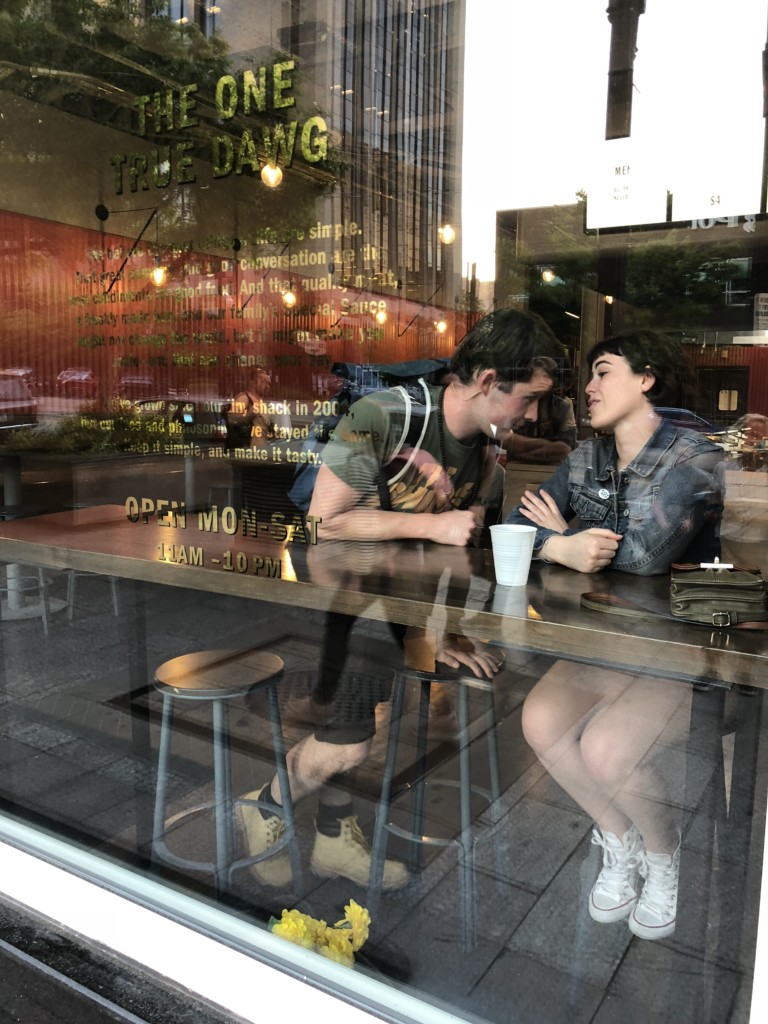 Here, it becomes evident how the narrative direction is unfolding, as underscored plainly by the play’s title. Lorraine tells Ford, “I had it in my head that we would make it work. Even with all the differences, and everything. I mean, I didn’t know in like a – I want a strawberry milkshake type way – I just knew. I think. And then when you told me that you were leaving, I took that to mean that you didn’t feel the same. I took it as rejection.”

Hindsight’s premise is a classic romantic comedy. But, Shepherd fleshes out the characters with such credible depth, conflicted emotions and desires that an audience member is drawn further inward with each scene.

Lorraine is a young Mormon skeptical about the realistic possibilities of finding the perfect standard of love, honesty and bliss. Foster elicits every layer in her character, marvelously representing the voice of Shepherd’s writing. She is charmed by Ford’s abundant exuberance and his earnest romanticism. It is fascinating to see her body language in her interactions with both men. She responds positively to Ford – her eyes truly light up when she sees him – but there also are moments when she suddenly seems tentative. Lorraine wonders if she should pull back before committing fully to Ford’s effusive expressions. Meanwhile, her body language is more deliberated and pulled inward when she is with Chase. There is one scene, however, at the Gallivan Plaza TRAX light-rail station, where she loosens up in one of Chase’s more emotionally revealing moments. 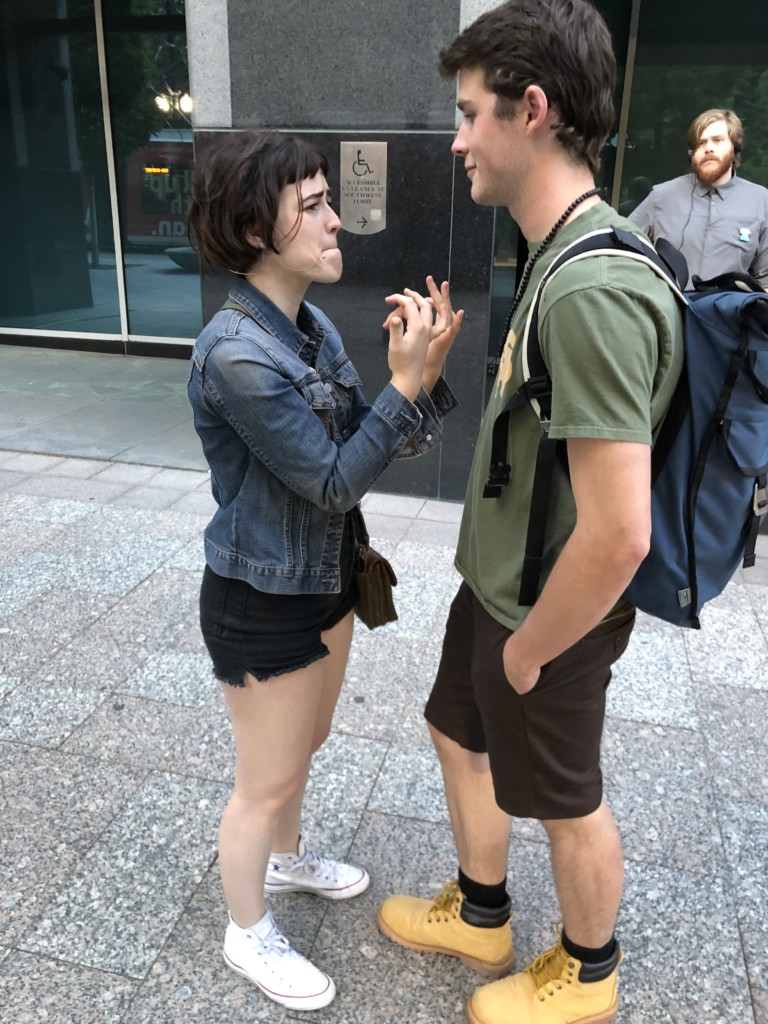 Likewise, Johnson and Fox, respectively as Ford and Chase, respond accordingly in their movement inflections. All three actors command the presence in their scenes without ever appearing as intruding or invading the various locations. Ford’s charms tinged with just the right amount of dorkiness are noticeable even among amused bystanders.

Fox stands out his moments, including the scene at the J Dawgs hot dog restaurant on Main Street. One of his most convincing deliveries arises when he tells Lorraine, “You’ve been shutting down on me. And, if that’s the case, that’s totally fine – just, let me know, okay? Or, you know, you don’t have to decide right now. I can be what you need me to be. But, don’t shut down on me, okay? Look, look at me. I care about you. Can you feel that I do? Because I do.”

Flower bouquets become an essential prop, which nicely augments many spots in the dialogue. In one instance, Lorraine asks Ford, “What did you do without me?” And, Ford responds, “At first it was really hard, like – I can’t describe. But, I got used to it, and I started to smell the roses.” 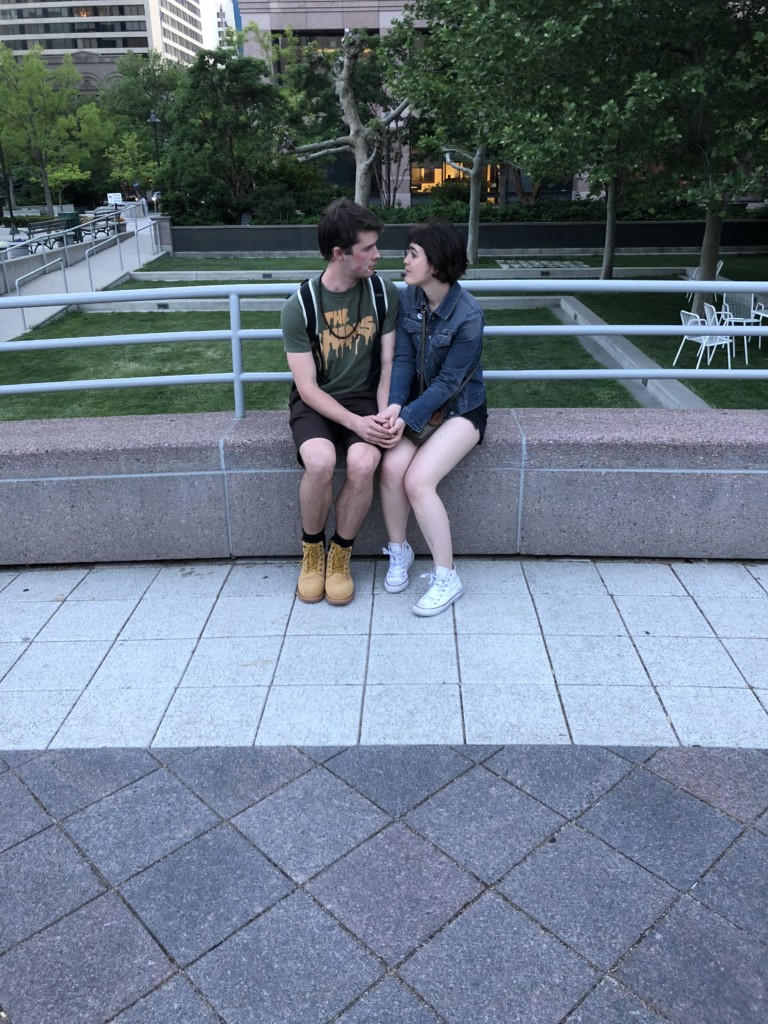 Every bit of Hindsight delivers on the immersive promise of its unique staging. The scene with Ford and Lorraine sitting and hopping on a bench in the Exchange Place could be any young couple enjoying a mild, sunny spring evening. On Main Street, the actors dash in and out of view, delighting not only the audience members but also nearby diners, tourists and workers who start snapping photos and realize belatedly they are watching a performance.

This is most prominent in a scene when Chase and Lorraine sit at a counter facing the front window of J Dawgs, while the audience remains outside to watch. And, it becomes even more interesting when Lorraine introduces the two men to each other at the restaurant – the only time in the play when both men appear together.

The scene also demonstrates how the counterpoint of humor and seriousness always is juxtaposed. Lorraine is not persuaded by Chase’s words. She tells him, “No. I’m not doing that right now. Because… it’s like you’re constantly trying to convert me… using all the feel-goodery you can muster, so I’ll do what you want.” Lorraine stings him when she says, “I might be allergic to you,” before she leaves the restaurant. Then, the audience watches Chase, who is left behind, pull a ring box from his pocket. 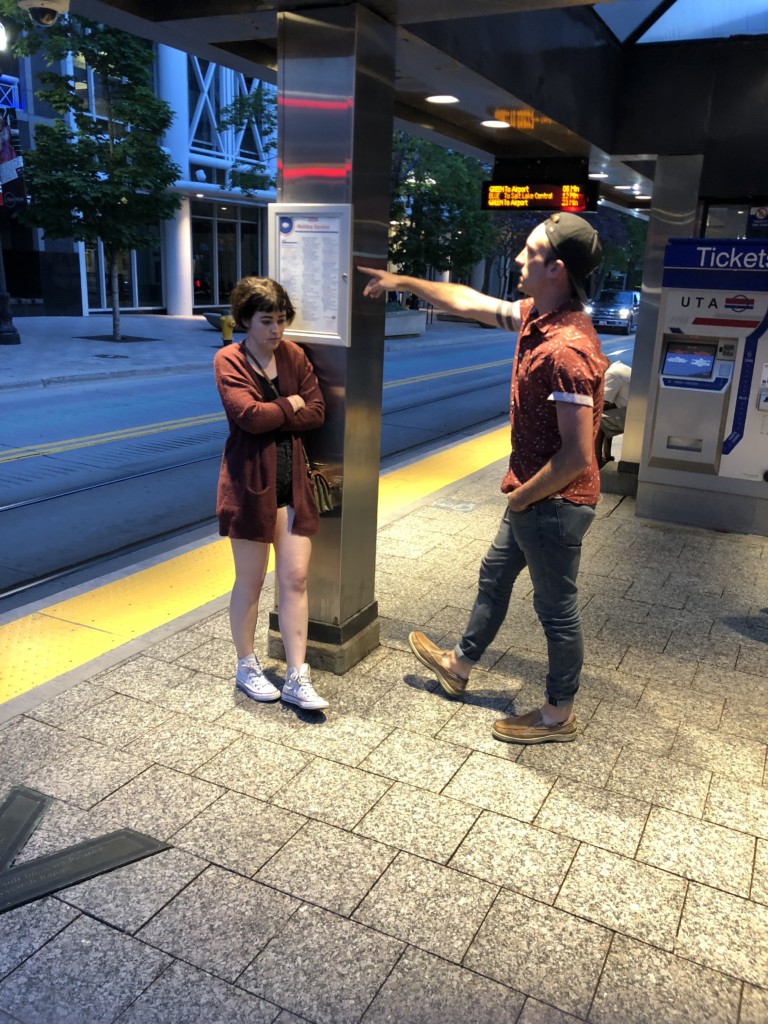 But, Chase does not relent, even when Lorraine is skeptical about whether he uses his emotions for manipulating his objectives. At the TRAX station, Lorraine lets her own guard down when Chase explains how he has tried to cope with the emotional drama of his dad’s anger that always was strong enough to disrupt and ruin the family’s mood. “I don’t know if it helps – but it was my younger kid-self, scared, and pushing you away, to protect myself from my Dad’s anger,” he says. “And to prevent myself from turning into that. I know that sounds like the most dorky thing you’ve ever heard – but, it’s true – our kids protect us.”

The pace never lags and there are some golden moments of timing. At Gallivan Plaza, Ford and Lorraine walk through the Water Wall, a public art installation of painted steel, vines and water (although water was not running on this particular day). It evokes the sense of Ford and Lorraine walking hand in hand, as if they are ready to be married.

The best moment, though, is the final scene, which brings everyone back to the Temple Plaza at the reflecting pool with the temple as the towering backdrop. At this point, the twilight is about to fade into darkness and audience members glimpse the shadows of Ford and Lorraine, as they circle the pool and move away from the audience. Before that moment, when everyone arrives at the scene, there is a lot of activity. A large group of international tourists stands off to the left, posing for photos with the temple in the background. At another spot nearby, there are photos being taken, probably for an upcoming wedding. Here, other than the audience, no one seems to notice this is a performance. 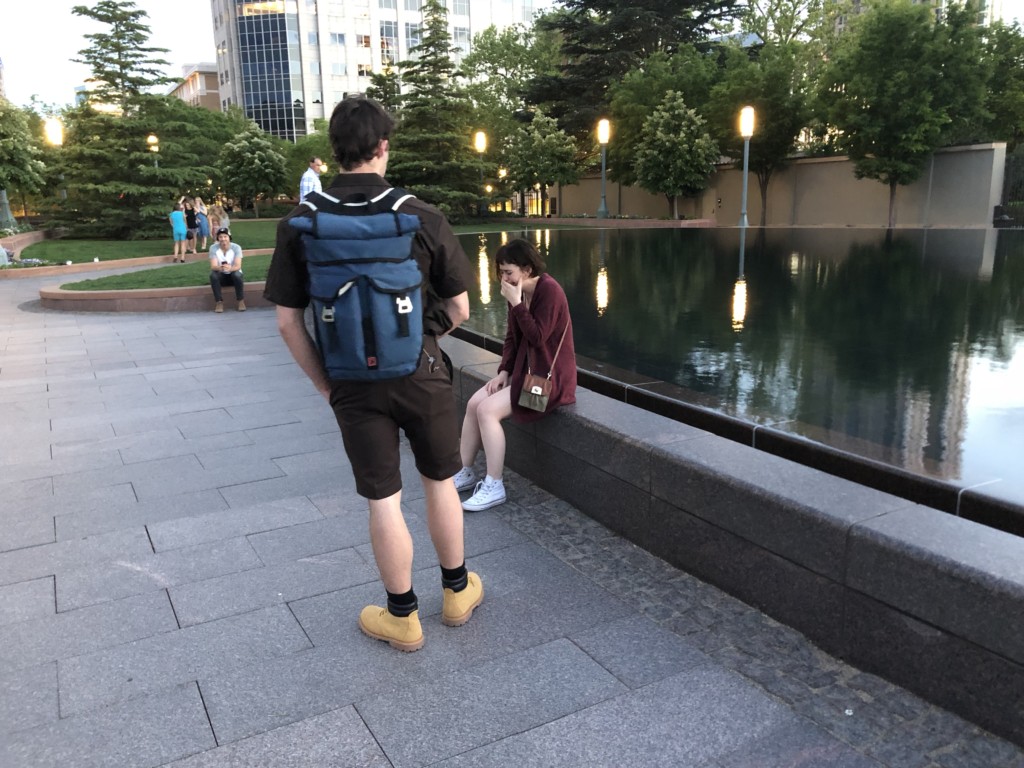 The scene proceeds so authentically in emotion. How many other couples like Ford and Lorraine have played their own scenes at this spot? How many other couples have had their hearts broken or have ended relationships here? In a play of countless delights, Hindsight closes on a note that would make any cinematic or theatrical director envious. It is as honest as a Utah love story could be.

Audience members also get a worthy soundtrack, available on Open Spotify. The selections accompany the scenes in perfect pitch. It starts with the opening Downtown by Majical Clouds and moves onto several songs featuring Noah and The Whale including 2 Atoms in A Molecule and Love of an Orchestra. The closing song is a really smart choice: I Love NYE by Badly Drawn Boy. It’s high quality pop, graceful and entertaining but also tuned relevantly to the sharp, incisive writing in Shepherd’s script.

Sackerson, one of the newer small theatrical companies in Salt Lake City, always is on point with its experimentation. Rather than rely on gratuitous novelties, the company amplifies its artistic strengths with consistently good writing, acting performances that respect the integrity of the script and directing choices that prove great productions do not require expensive or extensive trappings. Hindsight is winning the hearts of audiences who share their photos and words about their experience by using the hashtag #HindsightSLC.

Tickets are selling quickly for the production, which continues every weekend through June 23. Audience size is limited to six for each performance.

Sackerson also rotates two casts through the total of eight performances which occur every week (two on Thursday and three each on Friday and Saturday). The other cast assuredly is as good as the one reviewed here. Mary Nikols plays Lorraine, while Shawn Francis Saunders takes the role of Ford and Brandt Garber takes the role of Chase.

For tickets and more information, see the HindsightSLC website.