In its newest production, Plan-B Theatre’s Virtue, written by Tim Slover, promises much more than a fascinating story about a Benedictine abbess from nearly nine centuries ago whose exceptional achievements presage the ideal of the Renaissance individual.

In capturing the essence of St. Hildegard of Bingen’s creative genius (1098-1179) that covered music, theater, science, theology, medicine and mysticism, Slover strikes an intriguing synthesis of dual historical constructions surrounding a saint whose life and work have been resurrected so vividly in recent decades. 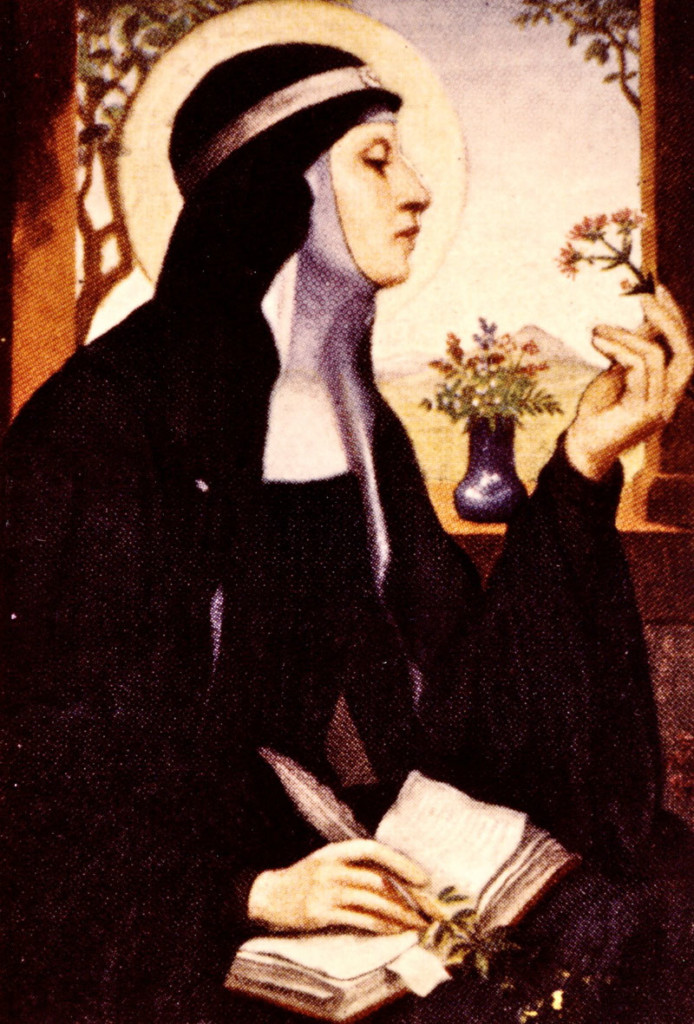 Slover’s Hildegard echoes in large part the thematic scholarly approach of historian Barbara Newman who has couched “Hildegard’s heroic virtue,” according to Cynthia Cameron, “in her genius as a theologian of the feminine divine.” And, then there is Pope Benedict XVI, who formally completed Hildegard’s canonization in 2012, whom Cameron says sees Hildegard’s heroic virtue “in his understanding of authentic womanhood, which he sees lived out in her life as an abbess and mystic.”

Slover’s script offers up Hildegard in the whole spectrum of her virtue – touching on her work not only as a visionary and theologian, the emphasized aspects in Newman’s treatment, but also as a nun, scientist, musician and mystic in Benedict’s appreciation of her gifts that were acknowledged and encouraged by the ecclesiastical authorities.

Hildegard’s uncharacteristic yet astonishing life is a striking antidote to the Pauline admonishment from the fourth century that women should be silent in the ecclesiastical setting. Women in the Catholic Church were permitted to practice and develop their art and skill in music, science, philosophy and other realms of the late Middle Ages but in their own quarters and without necessarily the full stock of resources that their male counterparts enjoyed. Relying on solid historical evidence and well-sourced chronicles, Slover presents Hildegard as a figure so remarkable that she could not be ignored by the church’s highest and most powerful leaders.

The production, which focuses on Hildegard’s relationship with Richardis, a penitent, will also include her music, the aspect on which many people have discovered Hildegard. Slover, a playwright from the University of Utah who also wrote Joyful Noise based loosely on anecdotes about the composing of Georg Friedrich Handel’s Messiah oratorio, says it was a recording of her music that drew him to his subject. “I love early music, and hers was so melismatic – not like any other music I had heard,” Slover says in an interview with The Utah Review. That recording, considered by many critics as one of the best overviews of Hildegard’s music, is A Feather on the Breath of God (Hyperion, 1984), a varied overview, beautifully rendered by Gothic Voices.

Slover’s literary curiosity about Hildegard grew as he absorbed Sabrina Flanagan’s 1990 biography (Routledge) and the saint’s writings – most notably, Scivias, a compilation of 14 extended poems in which she describes 26 revelations that came in visions, and Ordo Virtutum, a morality play in which the soul is tempted by the Devil, but is persuaded back to the right path by the Virtues. 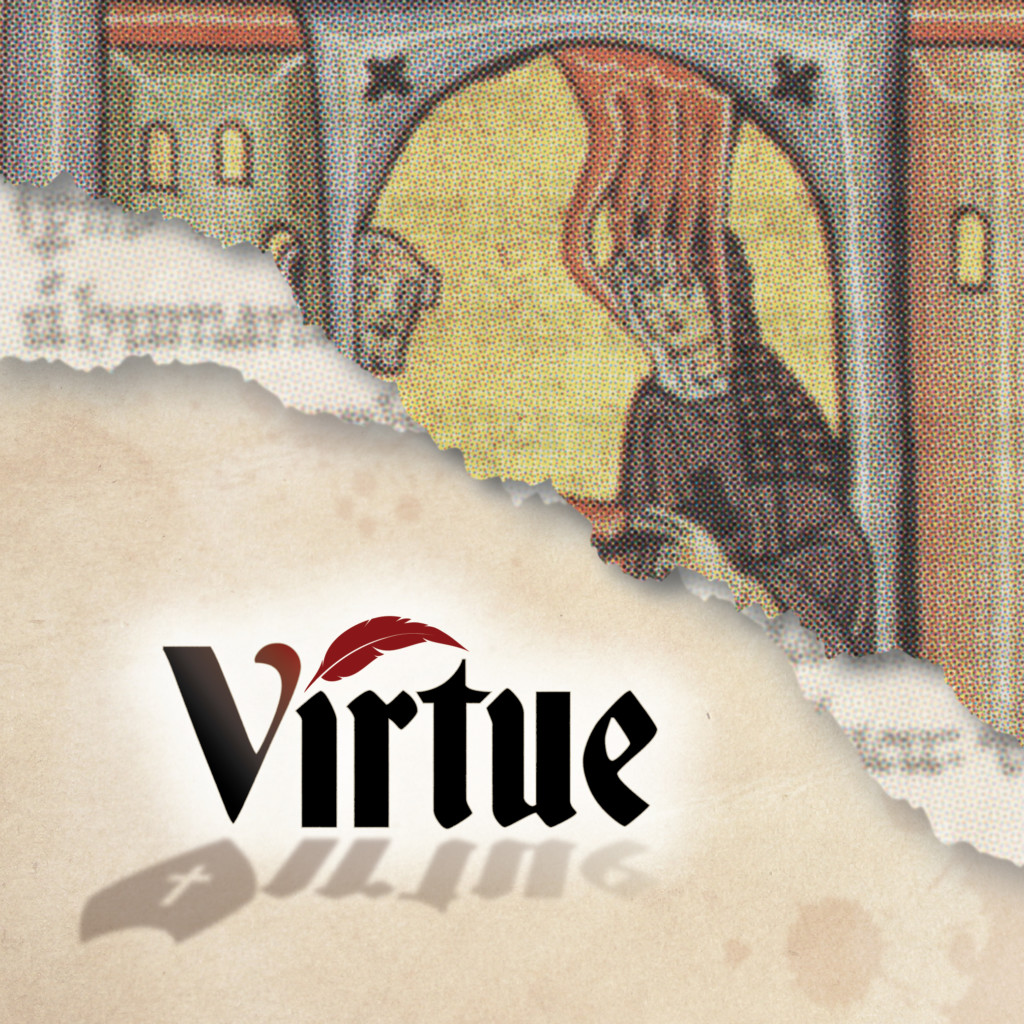 There also was Fiona Maddocks’ 2001 biography (Faber), a superb treatment by an author who also is a classical music critic in the British press. Maddocks’ book, reissued after Benedict canonized her in 2012, does a solid historian’s job at dispelling some of the gossipy mythmaking that catapulted as more people rediscovered Hildegard. The actual history of Hildegard is more than sufficiently fascinating to base a realistic, fact-based fictional interpretation for a play that deals with characters and events far removed chronologically from a contemporary audience.

Nevertheless, writing the two acts which comprise Virtue was no simple order, given the challenge to make the fiction as compelling in its plausibility as possible. Slover situates the play in June of 1146 at various locations in the Monastery of St. Disibod at the junction of the Rhine and Nahe Rivers. At this point, Hildegard is well into her forties and she is the prioress of 18 sisters. She has nearly completed the work on Scivias.

There are three other characters: Cuno, St. Disibod’s abbot who is eager to please his ecclesiastical superiors and sees Hildegard as the gateway to make the remote monastery as prominent as possible for both pilgrims and church authorities. Cuno likens the monastery to a cupboard and is worried that noble families may stop sending their daughters to St. Disibod: “Our cupboard, Brother Volmar, is losing stock. Soon, no more comfortable life at St. Disibod. If it goes bare, no more St. Disibod, at all.” Cuno sees Hildegard’s Scivias as a prize: But when I give the Pope [Eugene III] his book on Trinity Sunday, what happens? He puts his big papal seal on it, he smiles a beatific smile, the cupboard stays full. And soon it overflows. More novices, more land, our House prospers. And mark me, he will declare Hildegard the Prophetess of the Rhine. That’s what she deserves, isn’t it?”

Volmar, a cleric, serves as the story’s rational catalyst, especially against Cuno’s worries that Hildegard might be venturing into the territory of paganism and blasphemy in her visions. And, then there is Richardis de Stade, a younger woman no older than her late 20s who has arrived at St. Disibod as a penitent novice. She is the daughter of a noble family and her brother is the Bremen archbishop.

It is Richardis’ appearance that propels the dramatic tension and new intellectual and theological challenges for Hildegard in Slover’s theatrical interpretation. He situates the dialogue in a contemporary idiom which he says makes the story that much more accessible to today’s audience. The archival evidence of Hildegard’s correspondence suggests that she regarded Richardis as an intimate confidant. In one letter, dated from 1151 (which would have been five years after the time setting of Slover’s play), Hildegard apparently was disappointed and hurt by Richardis’ decision to leave the monastery and ask her brother for an assignment in a northern Germany monastery. While no written account exists to explain Richardis’ specific reasons for requesting to be reassigned, Hildegard’s subsequent correspondence indicates that she desperately pleaded with the ecclesiastical superiors to return Richardis to her ministry. In fact, a year after the requested transfer, Richardis died suddenly.

In Slover’s play, the medieval story of a deep love arising from an intellectual (and mystical) passion also underscores the utter human frailties of revered saints who also would have been taunted and eternally perplexed by the vulnerable, fearsome human emotion and flesh all individuals encounter. At the time of this play, the ideal of clerical celibacy was still a relatively recent concept. Focused on raising the standards of those who seek to serve the church, Pope Gregory VII proclaimed at the Second Lateran Council in 1139 that all priests should be celibate and that bishops should enforce the rule. It took many years before the edict could be effectively enforced. Many 13th century priests in pre-Anglican England, for example, still had mistresses. Thus, the notion of Hildegard having romantic, even erotic, feelings for someone in the monastery perhaps would hardly have been seen as stunning or unusual in the time, even regardless of sexual orientation.

Slover’s script rises to a reasonable standard of plausibility in terms of the intellectual history that made Hildegard’s life so remarkable. Set in 1146, the story hints at the forthcoming Second Crusade in which German and French armies had hoped to preserve the cities of Jerusalem and Damascus for Christianity. Hildegard’s skills were prized amidst the growing recognition of Scholasticism and the value of dialectical reasoning. Benedictine monasteries were flourishing, not only in returning to the humble tasks of manual and agricultural labor (in the play, Hildegard tells Richardis about the joys of working in the laundry: “We press linden flowers and sprinkle the juice on the wash”) but also turning their attention to the labor-intensive arts of preserving ancient manuscripts in the scriptoria. Benedictine adherents also cherished the arts, and Hildegard’s glorious music maximized the aesthetic impact of a monophonic language that would lead to the timeless Gregorian chants of her peers and successors.

Slover’s script also captures the essence of the exhaustive demands and sacrifice required to lead an ecclesiastical life in the 12th century, where the hours of daily life are marked by frequent intervals of prayer and meditation. Hildegard’s dedication to her piety is as great as her passion for intellectual discovery and experimentation.

The play is being given its first fully staged production in Utah. In 2014, it was performed as a staged reading (with scripts in hand) as the inaugural offering for the Ellen Arnold Groff Studio Series at the Fulton Theatre in Lancaster, Pennsylvania. Slover’s play also has been performed similarly in various venues around the country, including The Julliard School and at the University of Utah.

Slover sees Hildegard’s story along with her revelations as an enlightening opportunity to bridge the gap between sexuality and spirituality; to encourage those who may have been shunned by their religious communities because others do not accept nor affirm their differences to embrace their religious lives. Virtue is a thoroughly ecumenical play. The ideal of sainthood has never been denial or suppression. It is an unambiguous, daring exploration pushing the boundaries of the mind and soul to find heroic virtue in every aspect of earthly and heavenly contemplation.

Directed by Jerry Rapier and with music supervision by Dave Evanoff, the cast includes Christy Summerhays as Hildegard, Jay Perry as Cuno, S.A. Rogers as Volmar and Emilie Starr as Richardis.

Summerhays says that initially the idea of “taking myself back to the 12th century made my head ache at first” and that while she had heard of Hildegard’s name in passing, she did not immediately realize that she had written the music. “When I heard that she really wasn’t a trained musician, I really came to appreciate how her natural talents came through,” she explains. “It also helped me recall my own religious upbringing and to rediscover my own spirituality. Hildegard was into her forties when she started writing music and then she spent her long life being prolific and creative in so many areas.”

Performances are slated to run from Feb. 16-26 in the Studio Theatre at the Rose Wagner Center for Performing Arts on Thursdays, Fridays and Saturdays at 8 p.m., Saturdays at 4 p.m., and Sundays at 2 p.m. Plan-B also is offering a specially priced mini-season ticket package for Virtue and its next major production this spring, Morag Shepherd’s Not One Drop.

The Cathedral Church of St. Mark in downtown Salt Lake City (231 East 100 South) will hold a 7 p.m. public evening prayer service with music on Feb. 19 as a celebration of the life and music of St. Hildegard. The service will feature a presentation by Dr. Margaret Toscano, associate professor of classics and comparative studies at the University of Utah as well as Dr. Emily Nelson and Dr. Christopher LeCluyse, founders of Utopia Early Music, who will present on particular aspects of her music, in preparation for the compline service featuring rarely heard pieces composed by Hildegard. The service is open to the public.

The play is funded in part by The LGBT Community Endowment Fund at the Community Foundation of Utah, the Arch & Bruce Brown Foundation and the George S. & Dolores Doré Eccles Foundation.