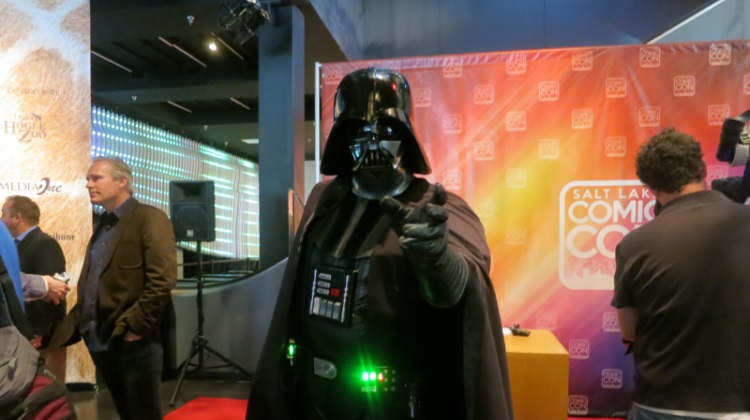 The crowd gathered outside The Leonardo shivered with anticipation as they punctuated the agonizing seconds with uncontrolled, random screams. “This is the best day of my life!” shouted one, just after another pointed towards the door and shrieked, “Batman!” Batman’s exit from the building sent the crowd, who had already been wowed by an array of Star Wars characters, into a new fit of jubilation. The adoring throng consisted of approximately 40 seven-to-eight-year-olds on a class field trip, who, to their utter delight, were forced to wait outside as the museum was cleared from Tuesday’s press conference announcing several celebrity guests planned to attend Salt Lake Comic Con 2014 (September 4-6, at The Salt Palace Convention Center).

Those attending the press conference were greeted by a group of menacing Storm Troopers and a downright scary Darth Vader just inside The Leonardo’s main entrance. Inside the atrium, a montage of scenes from last April’s Salt Lake Comic Con FanXperience, or FanX as it has affectionately come to be known, played. FanX as a stand alone event, proved more than merely successful with over 100,000 attendees, beating the record of 2013’s Comic Con as Utah’s largest ever convention. Bryan Brandenburg, Salt Lake Comic Con’s Vice President of Marketing speculated that the upcoming three-day event will be even bigger. Building on the momentum of Comic Con 2013 and FanX, Brandenburg stated he believes Salt Lake Comic Con 2014 will prove to be “Comic Con 3.0”. When asked about the number of attendees possibly outnumbering the Salt Palace’s 150,000 person capacity, Brandenburg stated, “We feel like we are going to be pretty close.”

While Comic Con 2014 is expected to feature over 200 guests spanning all areas of Entertainment, Tuesday’s announcement, made via a short video clip, highlighted six entertainers with extensive Sci-Fi and Fantasy cred. The audience cheered as the video began with Ernie Hudson, most popular for his roles in Ghostbusters and Ghostbusters II. Cary Elwes, star of The Princess Bride and Robin Hood: Men in Tights kept the crowd cheering. Prolific Actor, Author, and Producer Bruce Campbell of Evil Dead, Evil Dead II, and Army of Darkness fame elicited the loudest audience response. Handsome John Barrowman, best known from television’s Dr. Who and the spin-off Torchwood along with Sam Witwer of Battlestar Galactica, Smallville, and Being Human represented the presence of television actors nicely. The last guest announced was Christopher Lloyd, beloved for his roles in the Back to the Future trilogy and his work on the The Addams Family and its sequel.

Improvements and changes to ticketing at this year’s event were also discussed. The changes include early purchase discounts; the introduction of a Gold Pass, which will allow a level of access between the three-day VIP Pass and general admission; loyalty discounts for those who have previously purchased a VIP Pass, and discounts for high school and college students. Ticket details and updated information can be found on the Comic Con website at www.saltlakecomiccon.com.