Having visited more than 40 countries in more than 20 years, the Neighbourhood Watch Stilts International members have become thoroughly versed in the curious and even sometimes bizarre intricacies of the bureaucracy underlying the process of obtaining visas for the purposes of international performance.

However, for the group of seven performing artists who will be coming to the Utah Arts Festival for their first performance ever in Salt Lake City, they have achieved a unique status as American authorities have categorized the artists as “internationally acclaimed aliens,” nevertheless a bit of satisfying amusement for Paul Miskin, the founder and one of the performers. 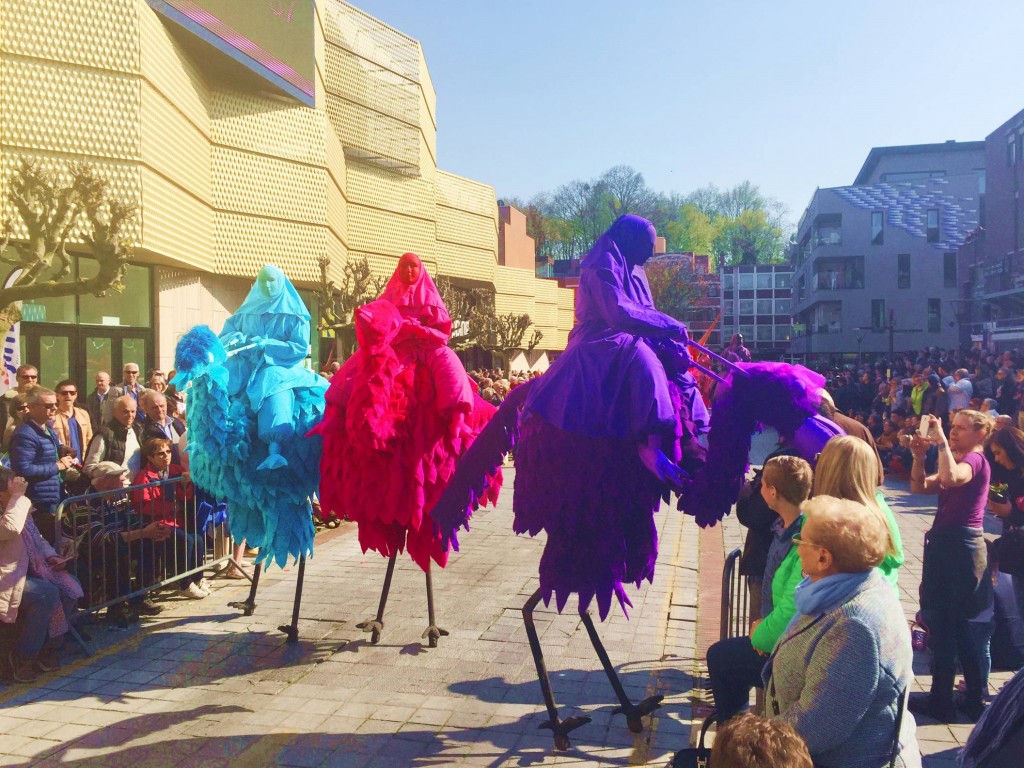 Miskin, with much humor and plenty of physical energy that belies the fact that he is in his late sixties, says in an interview with The Utah Review that the story they will perform — Les Oiseaux de Lux – is about a flock of wingless birds who have the power to elicit even a good bit of laughter and amusement from the most stoic ego-focused individual in a public setting like the Utah Arts Festival. NWSI is based in Newscastle upon Tyne. Performances will take place daily at 4 and 6:30 p.m. on festival grounds.

Miskin offers a curious yet appropriately illuminating explanation for how people react to NWSI performers as they stroll the public grounds. “It’s sort of like the difference between dogs and cats,” he explains. “If a giant bird would interact with a dog, it would be like, ‘oh my god, what’s that damn enormous bird doing.’ But, we live longer with cats than with dogs so cats say ‘what’s my tin opener doing wearing a latex face mask.'” 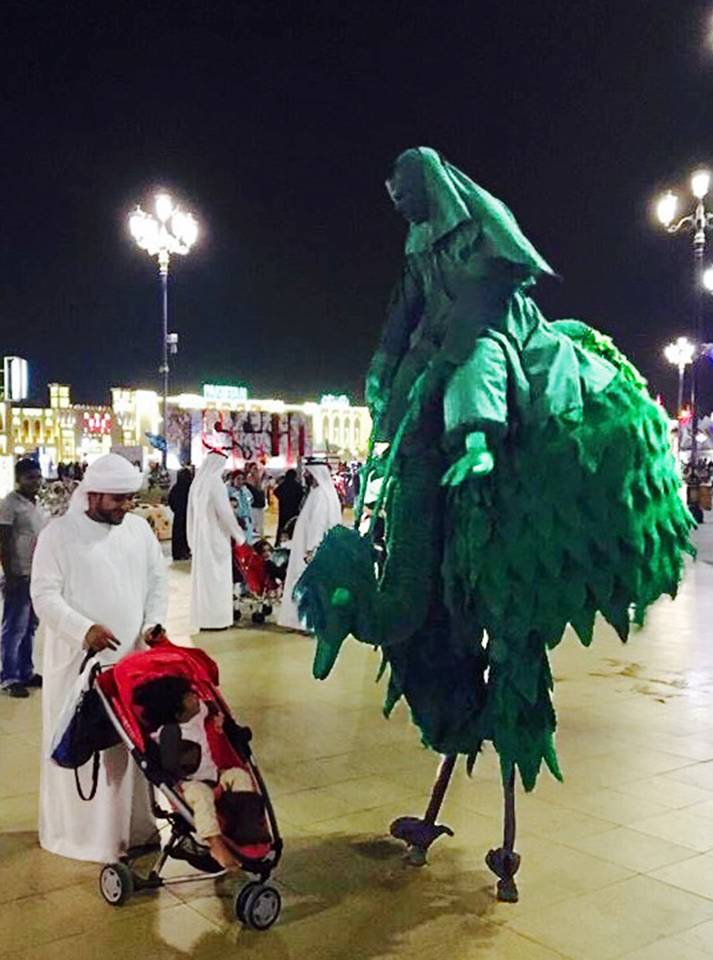 The genesis of Les Oiseaux de Lux is that the birds were hatched from giant eggs in a French supermarket, so hence they have French names and they move and perform in ways that brings to mind that these costumed feather beings moving about on pneumatic stilts are satirizing the realm of shopping and consumerism. Inevitably, they knock even the most casual observer out of the numbing stupor of boredom and back into reality about just how much we really need to laugh at the supposed seriousness of it all.

Miskin started the group in the mid-1990s, inspired by Catalonia street theater ensembles that incorporated many elements of folk tradition, contemporary dance, and the representation of fantastical animals and beasts in their storytelling performances. The unique aspect that particularly drew Miskin’s attention was the cavalcade element intermingled with the story telling. As a result, as the performers stroll from one spot to another, different levels and directions of narration take hold. The story’s basic structure is agile and flexible enough that the performers can essentially ‘tell’ a fresh version of the story each time they interact with observes and audiences in the streets.

Miskin then established a stilt theatre that was the format for shows at various street festivals he directed in England. Performers not only managed the physical requirements of dexterity and fluid, natural movement on the stilts, they also learned samba and practices of effective theatrical performance. Influenced initially by the aesthetics of great film directors such as Ingmar Bergman, some of NWSI’s earliest shows were set around a giant chess set and a nearby military museum.

And, to this day, Miskin and his colleagues train new performers in the neighborhood and surrounding area. Newcomers learn to maneuver on stilts in local streets or nearby parks and residents became accustomed to seeing performers-in-training wearing colorful costumes or holding props such as sparklers or hand-held fireworks that are a trademark of Catalonian street theater. They also would learn to move about on stilts in all sorts of topography in and near water and coastlines and across rivers and lakes, as well as in wooded and hilly areas.

In the spring and early summer NWSI host free, open weekly and bi-weekly workshops in the community’s exhibition park, which becomes an outlet for recruiting potential performers once they master the skills. As the group prepares for a large venue, high profile show, they use the workshops as rehearsals.

Whimsical, good-natured and theatrical as it all may seem, there also is an underlying sociocultural and sociopolitical message in the performances of NWSI. Miskin says the ideal of public ownership of space especially in the urban community is really the “litmus test of democracy,” which means being able to “go into the street and play in it.” 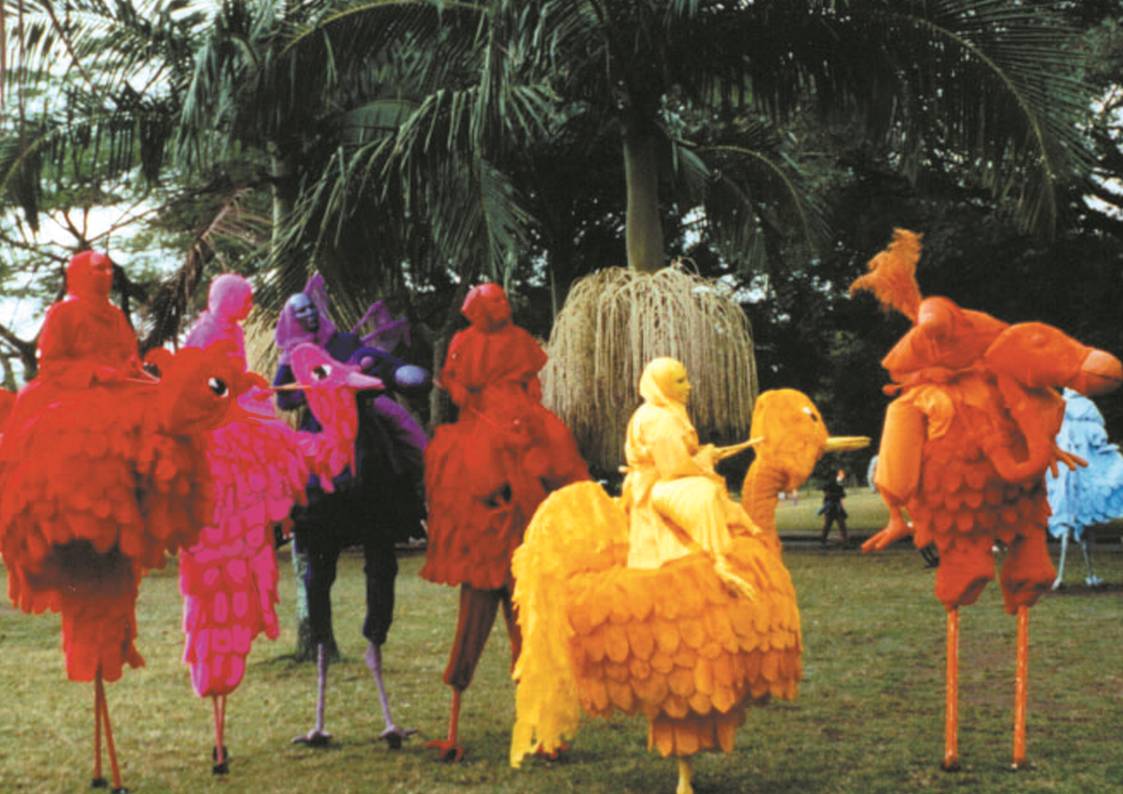 In contrast, as he notes, in a nondemocratic place, doing such a thing would mean “very bad things would happen to you.” To wit: the famous photo of the unknown man who stood in front of a column of tanks on June 5, 1989, the morning after the Chinese military had suppressed the Tiananmen Square protest. Street theater, especially in the French Revolution, epitomized the vernacular describing an art form that spoke the language of the people. Indeed, it was the ubiquitous statement of the times as the French all spoke of politics as theater.

As Michele Root-Bernstein wrote in a History Today article, “from the private letters of the obscure Rosalie Ducrollay Jullien to the public broadsheets of the famous Jean-Paul Marat they spoke, as did the latter, of ‘the same actors, the same masks, the same plots … the play of the political machine.’” This became the impetus of street theater.

As cultural ambassadors, NWSI has nearly 600 performances to its credit in Britain and throughout Europe and elsewhere including China, Taiwan, Japan, Singapore, Brazil, Venezuela, the Middle East, USA, Canada and Turkey.

Miskin says that he and his fellow performers (who range in ages from the 20s to the late 60s) are looking forward to visiting Utah for the first time. “We are the birds and we are exploring a new place and are ready for a new adventure,” he adds.