This flame that burns in my heart.
Calls me to the heat of Samba.

It is the glow that illuminates the darkness
The light that clarifies my path.

It is culture, art, and expression.
It is magic brought from Aruanda.

From black and white ashes
From so much suffering of yore

It is Samba. It is Fire. Samba Fogo
Takes away my heart.

Whenever Samba Fogo, Salt Lake City’s impressive outlet for Brazilian dance and music, takes the stage, it kindles a choreographic blaze, metaphorically and literally. In the midst of its second decade, the group is preparing for Chama, its most audacious concert undertaking ever.

Chama is the Portuguese word for flame and the forthcoming concert features Samba Fogo’s usual breathtaking choreography along with three new musical compositions as well as original soundscapes, backed by a string quintet, horn line, and the largest drum corps Samba Fogo has ever featured in performance. 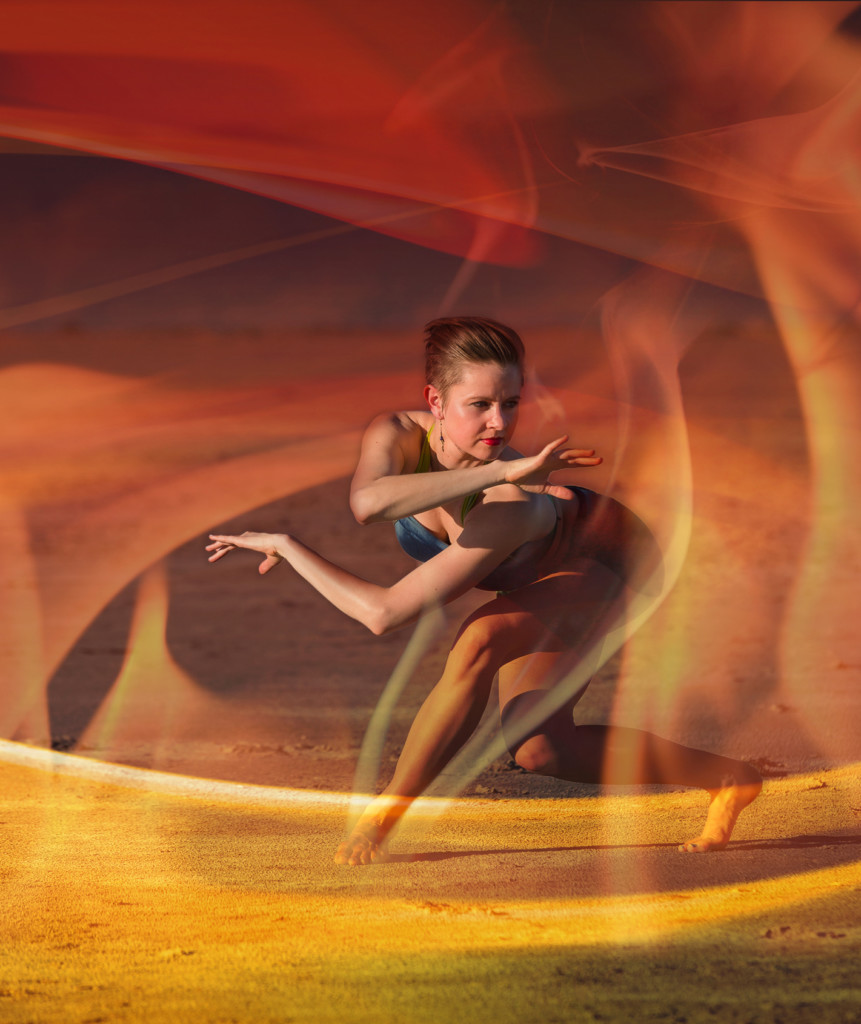 There will be a solo by guest artist Rosangela Silvestre, recognized as the mother of Afro-Brazilian dance, and music by Mark Lamson, master percussionist from San Diego who with Michael Spiro recorded Bata Ketu, one of the most popular albums of Afro-Cuban and Afro-Brazilian music released in the last 20 years. Kristin Jensen, soprano, and Jerry Maymi, tenor, will join Samba Fogo vocalists Solange Gomes and George Brown, who hail from São Paulo and Brasilia.

And, of course, fire spinning will round out the stunning visuals on the Jeanne Wagner Theatre stage of the Rose Wagner Center for Performing Arts. Performances will be held 7:30 p.m. on April 27, 28 and 29.

As exciting and satisfying as Samba Fogo’s entertainment is for audiences, the group works hard to respect the authentic cultural and spiritual meanings of its performance art. When the words from Enredo do Samba Fogo, the group’s new school song, will be performed – ‘It is magic brought from Aruanda’ – performers will celebrate Aruanda’s historical roots. Created by Brazilian slaves who were brought from Luanda, Angola in Africa over the course of three centuries, Aruanda signifies the freedom and promise of heaven. It is a reminder that the dance and music culture of Brazil, notably Samba, is linked to deep African roots. Aruanda is the eventual term that evolved from Luanda.

Samba is known as the rhythm of the saints and Brazilian slaves worshiping in their Macumba religion called their many gods by beating drums. Even as Brazil identifies strongly with Catholicism, the worship of many gods (Orixás) is taken up by millions in the country. Dances and accompanying music indicate the nature and character of the gods.

These cultural foundations have energized Samba Fogo’s long-term project to cultivate a genuine appreciation for an art that has richer, spiritually enlightened contexts stretching well beyond the high-energy celebrations of traditional carnivals and feasts, according to Lorin Hansen, Samba Fogo’s artistic director. The group’s performances often have been the best avenues for bringing new dancers, musicians, capoeira acrobats, vocalists and drummers to its classes in technique and style.

Silvestre, who is one of the requested choreographers and international dance teachers for Brazilian dance and music and movement with roots in African countries, will lead three master dance classes during her time in SLC (Apri 24, 25 and 29) at the SLC Art Hub.

Hansen says the music and dance panoply of Chama is possible because of many years of research and practice. “We’ve always wanted to do it right and we have been blessed by having many great teachers,” she adds. “It is important that we keep this culture and its tradition alive and vibrant. These religious practices are stigmatized – even demonized – in certain areas of the country.”

Going back to the colonial days when the slave trade was at its maximum, slaves may have publicly professed their new connections to Catholicism but privately they carried on their spiritual practices from their African homeland, even as many slave owners disapproved. Today, there are many who worship outwardly as Catholics but privately devote themselves to Orixás worship. The drumbeats of the saints – the ultimate promise of Aruanda – has persevered in samba. Meanwhile, it was the foundation of blues music in the American South.

Crowds always are thrilled by the sights of fire, the relentless athleticism of choreography and the sharp drum rhythms of its performances but Chama’s real draw is the music. “There is grandeur in the mix of opera and fire,” Hansen adds.

The first of the music premieres is Enredo do Samba Fogo by George Brown, known as a “plot” samba, a stylistic form used for school songs during Carnival season. A second new song by Brown, Xangô, Sabio Justeceiro features Jensen on soprano. The song honors the god Xangô, Orixá of fire, drumming, lightning, and justice.

Brown also contributes Cai Sem Fim, a samba in a gentle bossa nova style. The title for this bittersweet love song translates to “falling without end.” Joana Galdino from Sao Paulo and Marcelo Gomes from Recife will perform a samba in the gafiera style, which is distinct from the ballroom style of samba and resembles the embrace gesture styles found in Argentinian tangos.

Several of the dance pieces also will feature original soundscapes (instrumentals) by Mason Aeschbacher, including one in the unique Silvestre technique, developed by the guest artist, that is a technically demanding composition with an abstract theme. The piece is scored for a rock quartet coupled with a string quintet.

Tickets are available through ArtTix outlets and for more information see here.