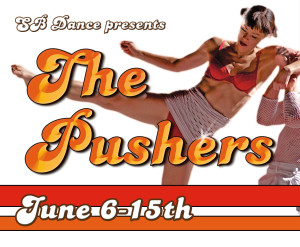 By 8:15 pm on Friday night of Pride Festival Weekend, the Rose Wagner Black Box Theater was transformed from a performance space into a tableaux of actors, fans, and benefactors. The crowd surged in for the opening night of The Pushers, an original performance by SB Dance.

The event began as a combination of party and performance. The theater sold drinks on the stage bar from 8 – 8:30 pm at evening performances and from 4 – 4:30 pm at matinees. Perhaps because all proceeds from beverage sales went directly to the arts, most audience members were making right-hand donations.

The crowd gathered in front of bright blue screen, creating a tapestry of a mass of faces awakened by art. Identifying who was who or what was what was impossible: prop or person? Voyeur or exhibitionist?

As seen from my grandstand seats, the vivid display was paradoxical and legit. As I day-dreamed and gazed at the blue backdrop, the details of Patti’s life with Robert – Venus and “the blue star of our destiny” – set the mood.

Originally bonded by a romantic affair, this sexually incompatible but creatively prolific couple blossomed into artistic soul mates. Robert was an art maverick. He was also gay.

Living out their intertwined destiny, he inspired Patti to kick down her wall and open her life. He helped sculpt her into the “godmother of punk.” She helped shape Robert into an influential photographer, remembered especially for his controversial S&M and homoerotic photographs.

Creative Director Stephen Brown understands what they both went through to produce so abundantly. “What I love about Just Kids is the struggle of getting things out,” he explained in a post-performance interview.

Patti’s story is about creation. Just Kids summons the inchoate spirits of a decade in the New York underground, surrounded by artists who were beginning their careers in 1967. This autobiography – a quintessential art history text – records timeline encounters with Janis Joplin at the Chelsea, Bob Dylan at Max’s Kansas City, Allen Ginsburg at a New York deli, Salvador Dali at a private dinner of art collectors, William Burroughs at the Bowery, owner Hilly Krystal at CBGB. They are stuff of legends.

Patti and Robert’s tale is centered against this raucous backdrop, but the myths didn’t always come out well. The book begins and ends with Mapplethorpe’s death from AIDS on March 9th, 1989.

Brown’s creative staging spotlights Smith’s memories of the struggle against poverty, the sacrifice of an artist, the influence of family, and political misunderstandings about homosexuality and human rights.

Around 8:30 pm, lights alerted the play’s characters to separate from the audience members. Theater patrons took their seats, the stage cleared and music echoed through the black box.

Brown picks up where Smith left off in the 1980s, albeit with far more abstraction. He guides the audience on his personal and artistic journey from radical ‘80s New York to today’s conservative Utah. He projects this experience through dance, props, and personal monologue.

His end product, The Pushers, is provocative, particularly for a Utah audience. It is episodic, depicting success and sexual misadventure while portraying the essence of the characters who flow and gyrate in his dance scenes. Brown’s direction unquestionably evokes Robert Mapplethorpe’s controversial spirit.

Brown transforms his cast members into puckish human statues scantily clad in white and red, innocence and loss, using red as a symbol of many fallen gay artists. While Brown makes it easy – at first – for the audience to objectify his characters, he changes onlookers’ perspective as he shows that his statues have “cojones and gatitas.” They emerge as ballsy, autonomous beings.

Brown frequently interrupts the severe with the comical. He interjects abstract scenes about one character, Annie the sculptor, with non-fictional, personal monologues. It is clear that artistic fervor Smith and Mapplethorpe experienced the 60s and 70s set the backdrop for his tumultuous life decades later.

This is Brown’s personal journey. He acknowledges that his family saga ties the performance together. His family shaped his experiences, and he speaks directly of his wife and children in various monologues. His fellow dancers and artists are naturally his family too, and they help him erect his artistic world. Brown uses an inquisitive lens and powerful voice in his soliloquies about family, tacitly encouraging his audience to push out their influences as well.

Brown breathes soul into the backdrop of his life, and makes his story universal. He urges expression by reminding us that Silence = Death. He paints a big arc, explaining, “I have this character who dies of AIDS in the 80s but there was progress over 30 years that led finally to gay marriage.”

Robert Mapplethorpe’s fight for acceptance in the 1970s was embraced by newer generations, but homosexuality remains misunderstood. The Pushers draws attention to the ongoing human rights campaign. Gay marriage remains banned or is in litigation in 23 states, including Utah, Idaho, Nebraska, Colorado, and Montana.

The next party begins as the theater changes again, transforming into the set of The Birdcage. Strangers dance together and sing, “We are family. I got all my sisters with me.” The audience members become part of Brown’s tableaux, inspired to push it out.