“He not only started to doubt America, but he started to doubt himself. He started doubting the gift that Allison claimed he was born with. She had first whispered that word a year and half ago, that strange, sacred word, she had whispered it into his ear one morning, and it had sent thrill and terror down his spine. Genius.”

Jasper (Austin Archer) reads these words from pages of the manuscript of his novel to KJ (Whit Hertford) and Evan (Aidan Croft) on the evening of the Fourth of July in a small Vermont town. They have gathered on a picnic table behind the coffee shop where Evan, 17, works. Jasper and KJ are in their early 30s. 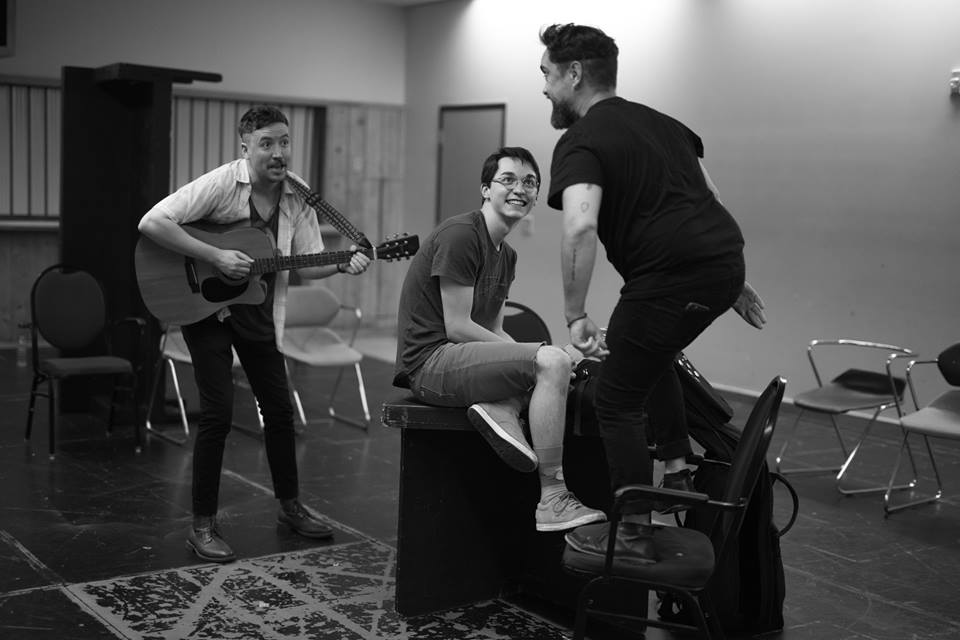 This scene abundant in eloquent foreshadowing occurs in the first act of The Aliens, a play by Annie Baker, which is being given a superb Utah premiere by Riot Act. Staged at Ember SLC near downtown Salt Lake City, the production sings with emotional brilliance – an exemplary piece of minimalistic, no-proscenium theater.

Hertford, Riot Act’s artistic director and Archer, playwright and actor, direct and act in this production along with Croft, a true natural who is a student in Westminster College’s theater program. In their rendering, The Aliens is a chamber theater masterpiece.

Earning the rights to do the Utah premiere for this Baker play is a commendable artistic coup for a laboratory theatre that Hertford founded three years ago in East London and has recently brought to SLC. The company’s theatrical diet generally comprises radical adaptations of works by Chekhov, Shakespeare and Ibsen but The Aliens is a departure that pays handsomely on the investment. 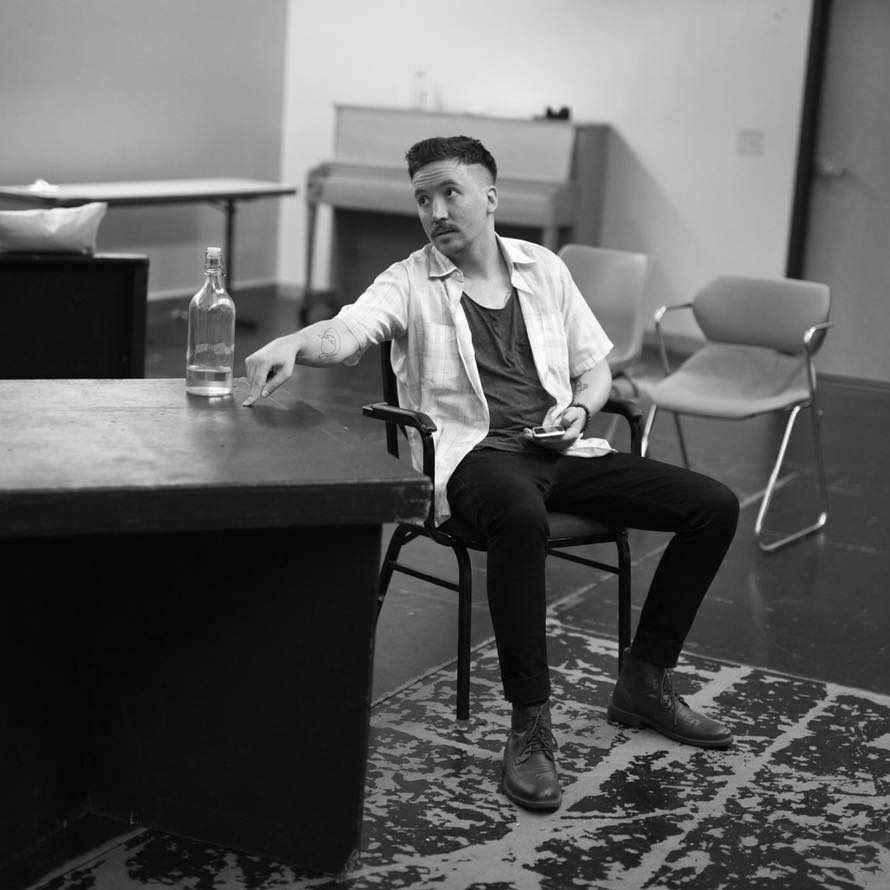 Baker, 37, who won the Pulitzer Prize for drama in 2014 and received a MacArthur Fellows Program genius grant last year, wrote The Aliens a decade ago. The play was part of three works she wrote, using a small Vermont town as the setting. The mature sensitivities of The Aliens belie the youthfulness of its playwright. Anchored in themes and the tones of the poet Charles Bukowski, the two-act play elucidates many emotional notes on the emblems of the “inherent contradictions of the human spirit.” Maria Popova describes Bukowski as a man of “unabashed profanity and self-conscious sensitivity, of tragic cynicism and heartening insight on the meaning of life and the spirit of writing.” All of these elements are in Baker’s play and Riot Act’s production.

Impressively, the trio of actors excels in rendering the natural rhythms and structures of Baker’s script. Hertford describes the work as “a beast of a play; was sneaky challenging to find the road map in between dialogue and how the silences needed to speak louder than the words.” In music, the use of rests, pauses and silences do much to shape the emotional arc of a piece, as the best performers comprehend. Likewise, Baker is explicit in her directions: “At least a third—if not half—of this play is silence. Pauses should be at least three full seconds long. Silences should last from five to ten seconds. Long pauses and long silences should, of course, be even longer.” 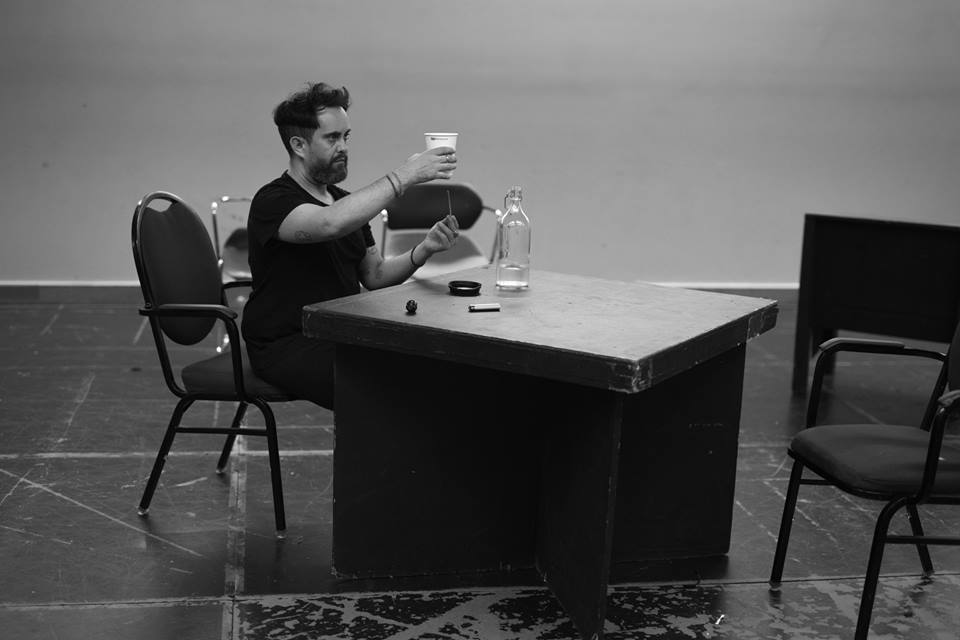 At the opening performance on the evening of Independence Day, synced to the nature and setting of the story, the actors met the demands superbly. Indeed, the silences enhance the pacing and direct the audience to peer deeply into the characters. Jasper and KJ have been friends for a long time. Their outside social circles are nonexistent. Both have various substance issues. Jasper indulges his own emotional drama, regarding a breakup with a girlfriend. But, KJ seems to be even more isolated and perhaps the most insecure of the group. Their hangout is the rather unpleasant setting behind the coffee shop. This is where they meet Evan, a teen who works at the shop. Evan, hauling trash bags to the bin, tells the men they cannot loiter there but Jasper and KJ dismiss the warning.

The play’s title come from a Bukowski poem which includes various lines: “you may not believe it/but there are people/who go through life with very little friction or distress” and “they have moments of grief/ but all in all/they are undisturbed/ and often feel very good.” Indeed, Jasper and KJ are not “aliens” and it appears that even before Evan hits the formal age of adulthood, the prospects of being an “alien” are on the verge of vanishing. Evan is not a popular kid but he is talented, as he tells the guys he is going to a music camp as a counselor in training. At first, Evan is awkward (played with such conviction by Croft) and he nervously responds by saying “cool” a lot. 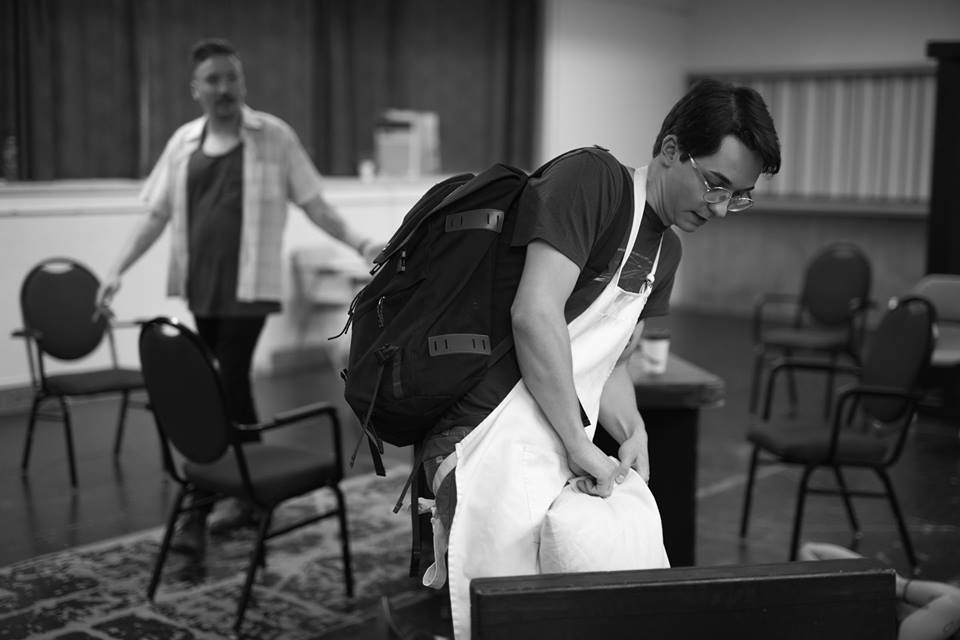 But, Jasper and KJ obviously enjoy the teen’s company and the informal gathering on the night of the Fourth of July confirms the new friendship bonds. Evan brings brownies his mother made and sparklers, or as Jasper (interpreted exquisitely by Archer) says, “SHPAHKLAHS!” and in the next breath apologizing to Evan for imitating a Jewish person. Jasper and KJ (Hertford masters the complexities of this character through every quirkiness and latent emotional epiphany) had hopes of being a successful band and they treat Evan to one of their original songs, The Frogmen.

Evan and KJ encourage Jasper to read from his unfinished novel where the male character is unnamed but it is unquestionably autobiographical. Continuing the passage after Allison had whispered “genius” into his ear, Jasper reads about the burden of living with the label: “The loneliness of it could kill him. He wasn’t sure if he believed in a God, but if there was one. He was waiting up there in the sky impatiently. He was putting his finger on His watch and raising His eyebrows and saying: When’s the new painting gonna be finished, son? When you gonna stop fucking around?” Evan and KJ stay still for an extended moment. 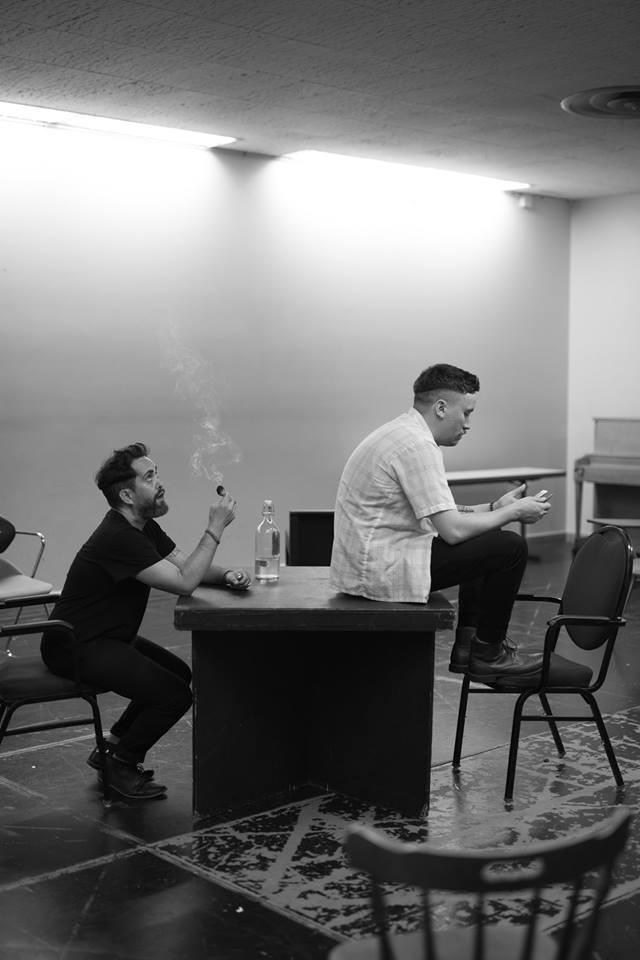 Although the first act continues for nearly 10 minutes after this scene, Jasper’s reading sets the stakes for the second act. He already knows his epiphany. In the second act, marked by scenes of blazing emotional sincerity, KJ and Evan find theirs. Baker’s script is filled with intense insights. And, to appreciate this treasure of a play, one also would do well to revisit Bukowski’s poem from the late 1950s, Friendly Advice to a Lot of Young Men. The bonus is Baker’s complex but lucid unpacking of the vulnerabilities we risk if we merely are contented to romanticize about the possibilities without ever really confronting the self doubts of doing something extraordinary. Riot Act’s The Aliens pays more than ample homage to the experiment.

NOTE: Photos are from rehearsals.