For Salt Lake City’s West High School students Nicole Andrade and Kelsie Muhlestein, touring the massive exhibit floor at last week’s SC16 global high-performance computing conference whet their appetites for a STEM field major in college. Kincaid Savoie, one of the University of Utah’s SupercompUtes team members who competed in a 48-hour competition that really was a supercomputing decathlon, said he enjoyed meeting his peers from 13 other university teams that represented three other continents. Marc Lyonnais from Canada said that more than 200 individuals from 18 countries who volunteered to work and maintain the conference’s computer network – the most powerful anywhere in the world – came together like a close-knit fraternity for SCinet, what he described as demanding as a “condensed PhD course in a very short time.”

There were many successes of collaboration and engagement at SC16, the supercomputing conference that generated more than $10 million in economic impact for Salt Lake City. There were efforts to highlight the value of diversity, equity and inclusivity in STEM and especially the field of high-performance computing, which included large groups of high schools students from West High in SLC and from Provo.

Enrique Arce-Larreta, a West High School physics teacher, said these field trips are essential in science and STEM education. “I still remember when I went on field trips as a kid. They show how real life works and help kids to hone in on what their STEM interests might be best for college,” he explained, adding that he advised an all-girls robotics team at the school.

The early exposure to science and technology matters, said Arce-Larreta, whose family includes relatives who have worked in a science-related field. Andrade, a junior, explained that trips to museums she went with her father, who is a physicist, strengthened their family bond. Her interest is in higher-order mathematics including multivariable calculus. “I wasn’t really interested in arithmetic and math such as algebra,” she said, “but I like the higher levels of it because of the creative idea of solving a complex multivariable problem.” Muhlstein said she is interested in science and math, which comes from hearing her grandfather talk about his career as a chemist. 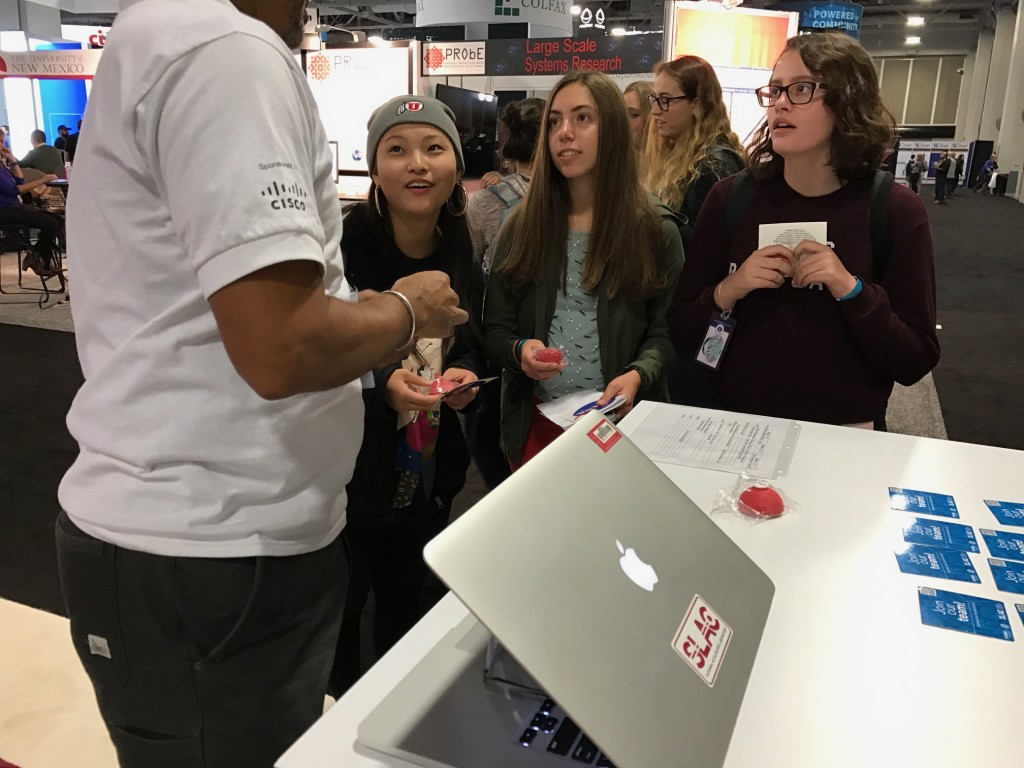 Arce-Larreta said visiting the conference clarifies the direction a STEM-based curriculum could take to have a greater impact in schools. He hopes that the Salt Lake City School District eventually will make a computer science class a requirement for graduation. Earlier this year, the Chicago Public Schools, the third largest in the U.S., became the nation’s first school district to elevate computer science as a core requirement for high school, separate from math and science.

Trish Damkroger, acting associate director for computation at Lawrence Livermore National Laboratory (LLNL) and a senior member of the SC16 leadership team, said previously the shortage of qualified computer science specialists could reach 1 million within the next five years. In an earlier interview with The Utah Review, she added, “The biggest challenge is finding the teachers to educate along the full pipeline,” and to help fill that gap requires expanding the STEM education focus in today’s middle school and high school classrooms.

Meanwhile, students in teams of six individuals and two alternates from 14 universities representing the U.S., Europe, South America and Asia competed in a non-stop 48-hour race to complete a gold-medal class status workload of scientific exercises in high-performance computing. They accomplished this all while impressing a judging panel and conference attendees, dealing with a power shutdown on no prior notice and building an advanced cluster with hardware and software that could not exceed a 3120-watt power limit (26 amps at 120 volts) – roughly equivalent to an electric kettle or heater fan.

The University of Utah’s SupercompUtes team narrowly lost – “by an eyelash,” as described by Stephen Harrell, student cluster competition chair – to the University of Science and Technology of China in Hefei.

Harrell, a Purdue University scientist who has fielded teams of his students in previous years, said the competition intensifies every year by significant increments. “The teams are much more professional and prepared than ever,” he said, “and we include activities that get them out of their booths and send them into the conference so others can see how talented these kids are.”

The exercises tested and enhanced many fundamental skills. For example, teams had to reproduce results from an award-winning scientific paper presented at last year’s conference and compare theirs to the original findings. Students used the ParaView analysis application to generate visual renderings and animations of astronomical simulation data.

They also performed a password audit. As Harrell explained, “Passwords on most modern systems are maintained as a one-way-hash – a function that will take the password and certain other values to compute a hash.” He added, “If the hash function is strong, it will be computationally difficult to determine the password given only the hash. Teams will choose their own software and compete to find the greatest number of correct passwords from a corpus of password hashes.” 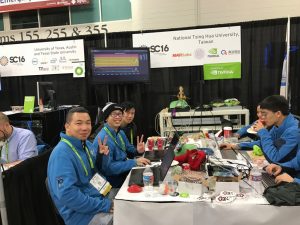 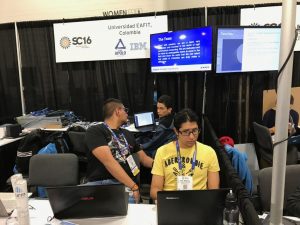 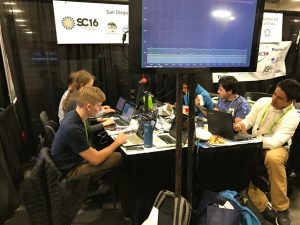 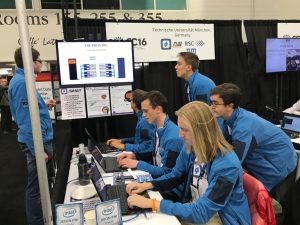 Savoie, one of the University of Utah team members, said he and his team members enjoyed the mystery app exercise which highlighted the versatile Gromacs package originally designed for examining biochemical molecules like proteins, lipids and nucleic acids but also has been extended to study nonbiological systems including polymers. “It really is practical and you see immediately why this is important,” he said, “even with something like shampoo to see why it doesn’t leave an oily residue in your hair or on your hands.”

The students also worked through unexpected contingencies such as what to do during a power outage. Harrell said the exercise was inspired by a sudden power failure that occurred in SC07 at Reno, a result of the power supply being inadequate for the numerous high-performance computing machines that were online during the conference. The outage lasted about an hour, which Harrell recalled the press describing it as “the world’s largest reboot.”

The outage also provided a tough lesson for teams who were competing in the conference’s first-ever student cluster competition. “When the power was restored, some teams, who had been checkpointing their systems, resumed their computations quickly,” he explained. “Other teams who had not been saving data, lost many hours of work and had to start over.”

Teams knew that there would be a curveball of a power outage but they didn’t know when it would occur. The competition organizers pulled the plug at 11 a.m. on the second day of the marathon event. 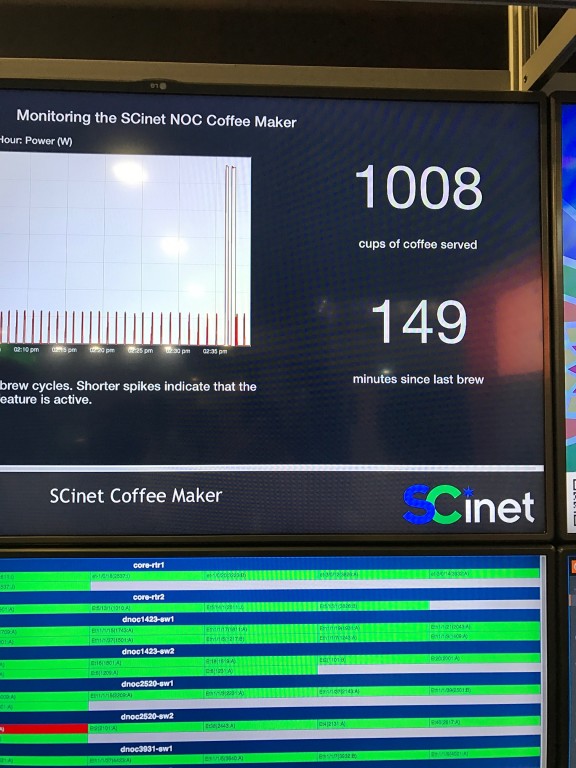 Indeed, the world’s fastest computing network – which Lyonnais said was 10 times than the U.S. Navy’s capacity – worked seamlessly. This year’s network was built with various partners including the Utah Education Network and various businesses including, to name a few, CenturyLink, Ciena, Cisco, Coriant, Corsa, ESnet, Infinera, Internet2, Juniper and Zayo.

At any one moment, at least 50 exhibitor’s booths (of the total of 349 in an exhibition space measuring 150,000 square feet) were using bandwidth of 100 gigabits or more per second, including a genomic computing exhibitor just across the aisle from the heart of SCinet operations that was using 1.2 terabits per second. 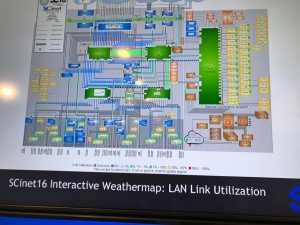 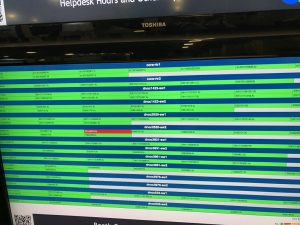 Thanks to the coordination of more than 200 volunteers and dozens of universities and research institutions, Lyonnais said it was as ideal an operating performance as could be imagined. “There were perhaps 10 errors that occurred,” he said, adding that the few instances likely resulted from a cut in a portion of the fiber optic cable underneath the carpet that was installed in the exhibition space.

Organizers installed a dashboard that continuously updated usage, metrics and interesting bits of data such as coffee consumption, an essential for any individual in the world of high-performance computing. The dashboard also indicated the status of system performance at locations throughout the conference site. In the mid-afternoon on one of the busiest days of conference activity, there was only one red warning indicator of service issues at one booth.

More than 11,100 attended SC16, with workshop attendance setting a record for the event, which was first held 28 years ago. Next year’s event, SC17, will be held in Denver.