As the impacts of climate change and threats to the planet’s sustainability become more urgent, discussions of colonizing and terraforming Mars have moved beyond idealistic fancies of science fiction writers. Some scientists have conceptualized short- and long-term scenarios of how Mars could be transformed into an inhabitable environment.

The irony is that scientists also believe that a catastrophic event nearly four billion years ago – perhaps climate change – likely made Mars into an inhospitable planet. The evidence of Martian canals that Italian astronomer Giovanni Schiaparelli first observed in the 19th century has been fleshed out with fresh discoveries. Mars likely once had a carbon dioxide rich atmosphere that kept temperatures warm enough for habitation while rivers (and perhaps an ocean) held the planet’s waters.

A pair of studies published late last year in prominent science journals indicated that data collected by NASA’s Mars Atmosphere and Volatile Evolution Mission (MAVEN) shows that Mars, which currently does not have a magnetic field, is still leaking atmosphere into the planet, estimated at 100 grams per second. Thus, scientists believe that the bleeding of the planet’s atmosphere probably occurred over maybe 200 million years. However, no one knows why Mars suffered such a cataclysm.

In the 73-minute Bluespace, filmmaker Ian Cheney takes a different tack from many recent documentaries about climate change and the environment. Rather than focus on prescribing strategies and tactics for tackling the problems of rising sea levels and other impacts of climate change, Cheney’s film is more experimental, blending the lines of idealistic science fiction and pragmatic scientific empiricism. He dispenses with a traditional narrative approach. Instead, he leaves many open-ended spots throughout a captivating film. These moments encourage viewers to step back in their thinking — not particularly about what our relationship with Mars might be but to contemplate instead about how we might improve our relationship with our own planet by managing and adapting to the conditions of a changing climate and environment.

The film will be screened Dec. 14 at 7 p.m. in a free, public installment of the Utah Film Center’s Through The Lens series, in collaboration with KUER-FM’s RadioWest program, at the Jeanne Wagner Theatre at the Rose Wagner Center for Performing Arts. Cheney will join RadioWest’s Doug Fabrizio for a post-screening Q&A with the audience. 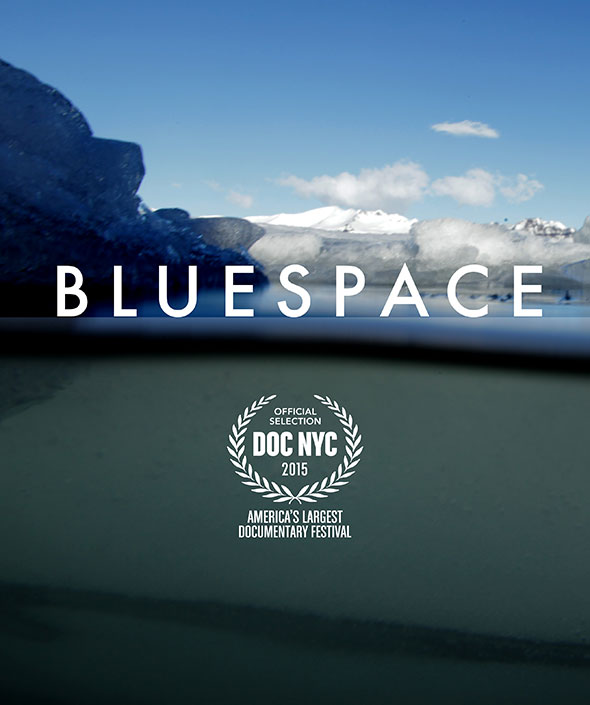 Bluespace’s arc does follow a familiar three-act approach in documentaries. The first section, An Imagined World, summarizes the fascination with Mars that began with Schiaparelli’s work in 1877 and has blossomed through today, as many explore the potential of terraforming the Red Planet. In the second section, The Gardened World invites further contemplation of the wise use of resources and the possibilities and limitations of terraforming in attempting to make Mars sustainable for human existence. The final act, A Most Watered World, brings viewers home to their own planet so they can think about water’s essential role in our relationship to nature. Cheney focuses on the implications and challenges we face given how we have built our coastlines and communities. There is the Gowanus Canal, one of the most polluted waterways, near his Brooklyn home. And, then there are the areas in New York City that were most affected by Hurricane Sandy four years ago.

In an interview with The Utah Review, Cheney says that when he prepared for the film, he was trying to figure out how to weave the two worlds into a cohesive story. “At one point, I thought about creating an imaginary Martian visitor decked out in a helmet and spacesuit and had even consulted linguists about what kind of expressive language could be used and then translated into subtitles,” he recalls.

While he settled on keeping many conventional elements of documentary storytelling in Bluespace, he also wanted the film’s style to be open-ended so that audiences would be free enough to decide on their own what they think, for example, should happen to coastal communities such as New York City, as water levels continue to rise steadily.

Cheney approaches the issue in terms of reverse terraforming. Take New York City, which was colonized four centuries ago and the city’s change in appearance from one century to another. As one interview in the film suggests, what will the city look like in 2100? (And, it’s likely that many parts of the city will be submerged.) “Do we try to defend ourselves, adapt or retreat and then how will we engineer that? This is similar to asking how we will approach making Mars livable,” he explains.

As Cheney explains, the film arises from three layered perspectives. First, he focused on the facility of astronomers, astrobiologists, and geophysicists in drawing connections between their scientific explorations of space and how they talk about Earth. “The more they have discovered and learned about our solar system, the more they appreciate the Earth,” he says. “I also came to find the more one looks at Mars, the more absurd and irresponsible it becomes about how we have treated our fresh water resources on our planet.”

Second, in a less expected but more significant way, Cheney learned to appreciate the “very weird” beauty and resilience of a heavily polluted environment such as Brooklyn’s Gowanus Canal. He lays the groundwork for the discussion—to what extent have we taken our natural resources for granted and how can we learn to rehabilitate these resources and manage them more responsibly.

Cheney’s “perspective of an alien/sci-fi aesthetic” is represented by wondrous abstract images of this toxic canal. They also put a fine point on the impact of that pollution. As the Gowanus Dredgers Canoe Club shows in the film, combined sewage and rainwater periodically overflow into the canal. Used condoms are spotted in the canal, a result of the sewage spillover. Unintentionally humorous, the scene underscores both the absurdity of our collective casual complacency as well as the formidable odds in trying to reclaim the natural integrity of the space. Before New York was colonized, the Gowanus Canal was the site of waters that provided an abundant source of fresh oysters for the Carnasie Indians.

The third layer of the film’s perspective encompasses the inseparable link between humans and nature, as Cheney frames it. A strength of Cheney’s approach is inviting viewers to focus on the issue without inviting a political or partisan frame into the discussion. Scenes in the film remind just why the aftermath of Hurricane Sandy remains as shocking as it did when the storm struck in 2012, the second costliest natural disaster to affect the U.S. Some of the regions of New York hardest hit by Hurricane Sandy’s storm surge included the highly developed communities of Coney Island, the Rockaway Peninsula, and Long Beach barrier island, as the U.S. Geological Survey followed up in a 2014 impact report.

The film features some homeowners who were affected by the storm—who effectively represent the dilemma of what should humans do: rebuild and defend, adapt, or retreat? Cheney opens the door to considering sensible engineering solutions, such as the floating islands concept in the Netherlands or The Seasteading Institute’s pioneering floating city project. Ijburg, for example, is Amsterdam’s first floating neighborhood with 97 homes on water. 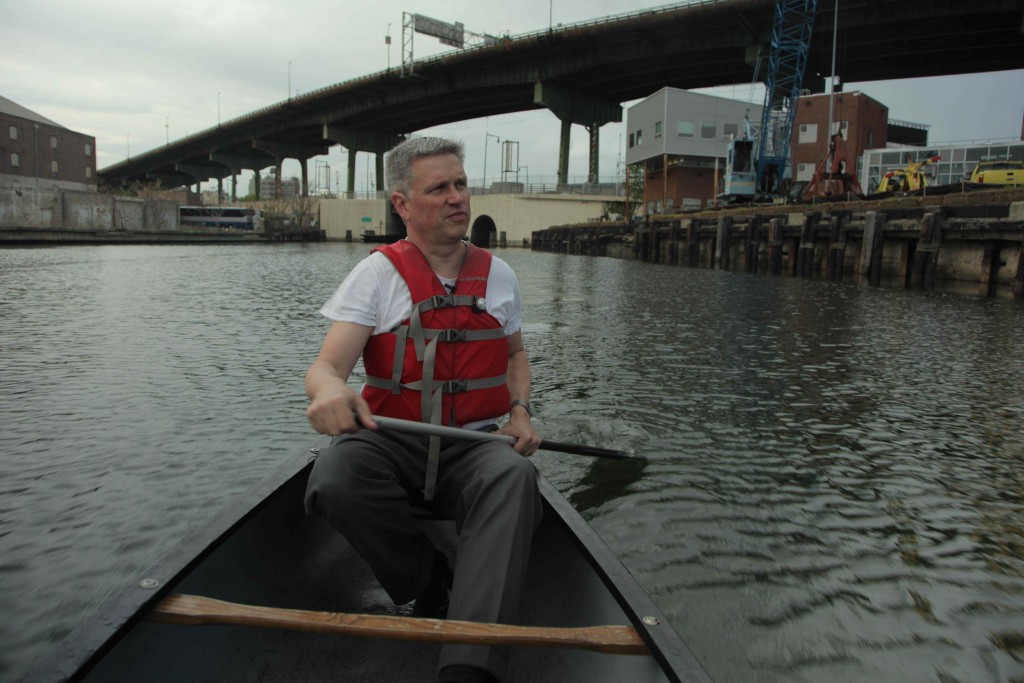 Bluespace is a captivating and surprising film, which also should make for a lively Q&A with the director following the screening. Cheney, who has won a Peabody Award for his work and was a Knight Science Journalism Fellow at the Massachusetts Institute of Technology (MIT), seeks a variety of grant, foundation and individual sponsors for funding his work, such as the LEF New England Foundation, which supported the making of this film.

His work includes some familiar titles, including King Corn (Independent Lens, 2007), The Greening of Southie (Sundance Channel, 2008), Truck Farm (PBS, 2011), and The City Dark (POV, 2012). The Search for General Tso, which premiered at Tribeca in 2014, is available at Netflix. Most recently, he completed The Smog of The Sea, which repudiates the myth of garbage masses of plastic in the ocean as the urgent environmental threat while explaining the more immediately relevant challenge of dealing with how microplastics break down into barely visible shards that create an unhealthy fog in ocean waters.