The desert is a vacant cochlea, a geographical chamber of bone, in which waves propagate from the base freely distant sound brought close to my hearing. The vehicle was now perched in an alcove of short, pinyon pine, amidst a vast solitude and harsh stillness. Soaking in the yellow grassy plain, I paced around laying out soft antenna wire –daydreaming– drifting in early adolescent years of countless hours spent sitting at a small wooden desk with a boombox and a purple lava lamp, scanning across the AM/FM band searching for ghosts, scouring the unknown. was I waiting for code, for voices, for an ethereal or chthonic broadcast? like William Burroughs practiced years before my birth [but possibly in a not so far away Kansas town] Was I hoping to transcribe what the white noise said, to log its wisdom, to validate my curiosity–my doubt? The antenna was spiraling outward from a suitcase control center, tangled in thorny grass, here, ready to receive the ghostly noise of far out weather. – Ryan Ruehlen 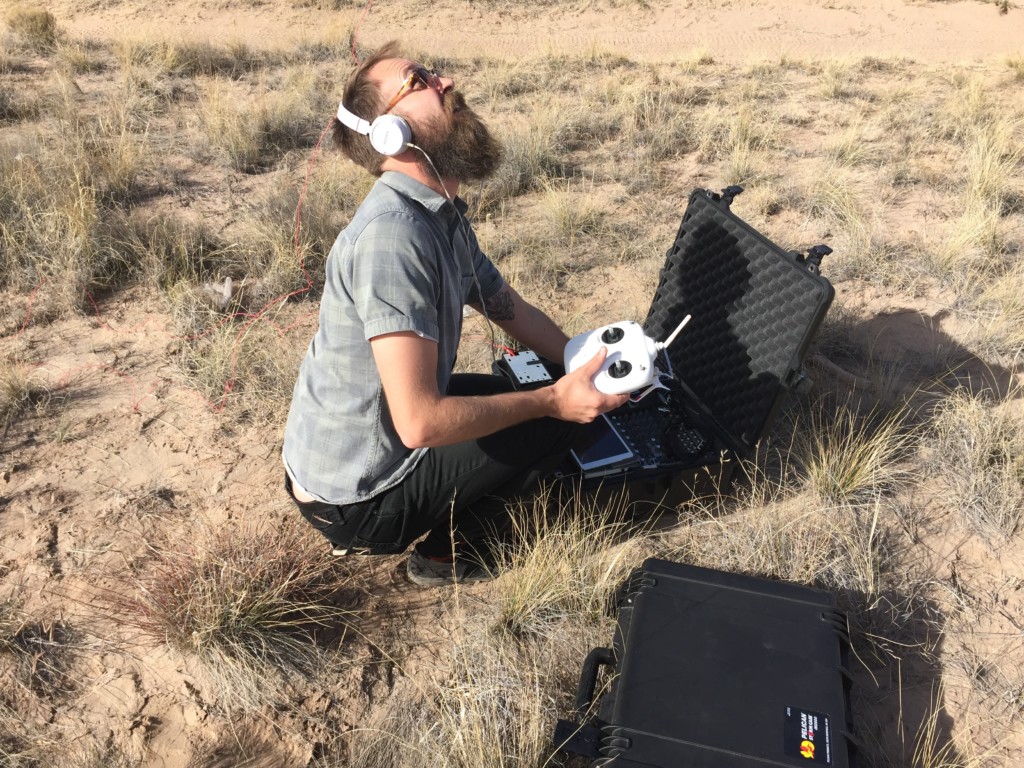 In his childhood days, Ryan Ruehlen was a band geek who played the saxophone. Later, he added percussion to his musical skills portfolio. In his undergraduate days at Fort Hays State University, the first seeds for finding a new musical path far from the conventional experiences of his boyhood were planted. “I was very much focused on the the visual arts – painting and sculpture, for example – but I did plenty of music in my free time, playing in rock bands,” he says in an interview with The Utah Review.

It was when he came to Boulder, Colorado to pursue his master of fine arts degree in studio arts, the inspiration for his new musical art coalesced. First, there were the wide open spaces of the Intermountain West. But, he also was exploring technology’s fit within the creation of art. “It is not just a novelty but about how technology fails us and breaks down,” he explains. “It becomes a matter of breaking things and discovering how and why they are not working.” 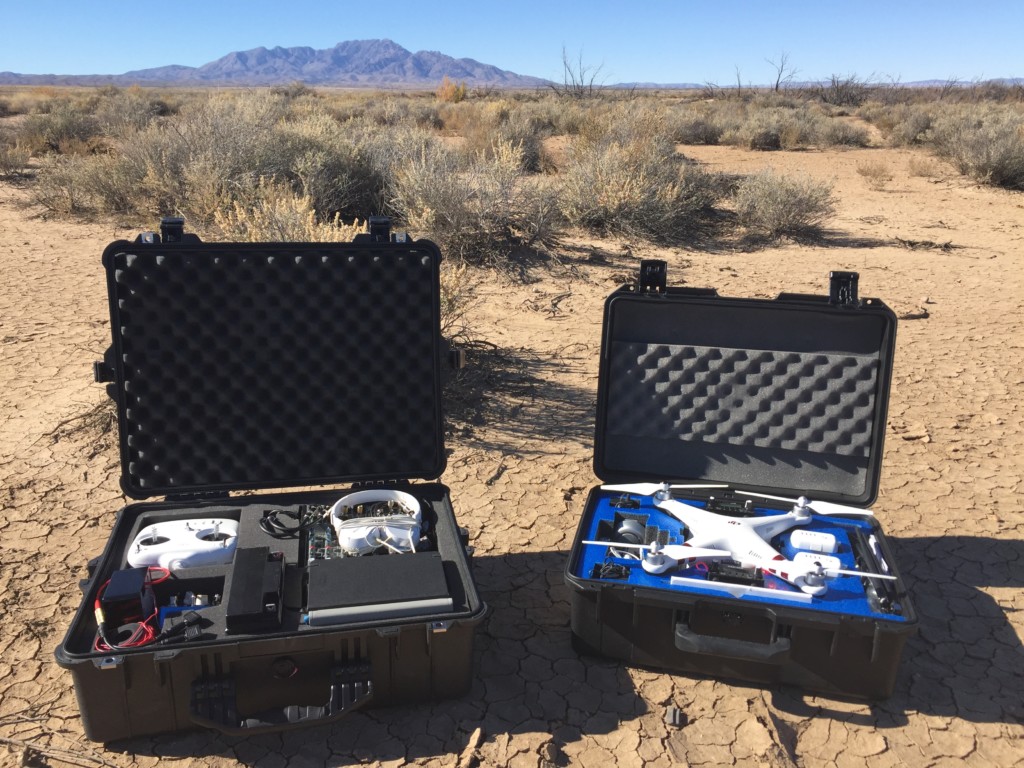 GeoRhythmic Drift Music, a musical installation that is part of his research on deep listening as a doctoral student at the University of Colorado at Boulder, will open at the Utah Museum of Contemporary Art (UMOCA) on Aug. 17 and will be available until Nov.3.

Broadly speaking, Ruehlen’s installation goes against the grain of many other artists who incorporate technological advancements in their work. Likewise, he uses an unconventional scientific approach. He incorporates field experiments investigating VLF (very low frequency) radio emissions – a technology that was used primarily during the first half of the 20th century for naval communications and telemetry.

VLF falls just below the threshold of what the human ear can hear. Known commonly among amateur radio operators and hobbyists as natural radio, VLF has served versatile purposes. It translates weather phenomena and has been used to analyze atmospheric electromagnetic disturbances or events triggered by lightning. It also has been used to study microwave background radiation.

Using handmade VLF receivers along with FM broadcast and digital live-streaming platforms along with unmanned aerial vehicles (drones), Ruehlen has been able to create impromptu sound art performances transmitted to remote listening stations. The aerial technology serves, as he describes it, as a courier system and an “acoustic prosthetic” that privileges the quadcopter as a tool for capturing the auditory potential of the atmosphere with the aid of extended, ground-to-sky antennas.

Ruehlen started working on the concept and logistics when he lived and worked in Chicago prior to going to the American West for his advanced studies. Naturally, the limited availability of open spaces in one of the country’s most densely populated areas constrained his capacity to expand upon the sonic potentials, as he conceived. 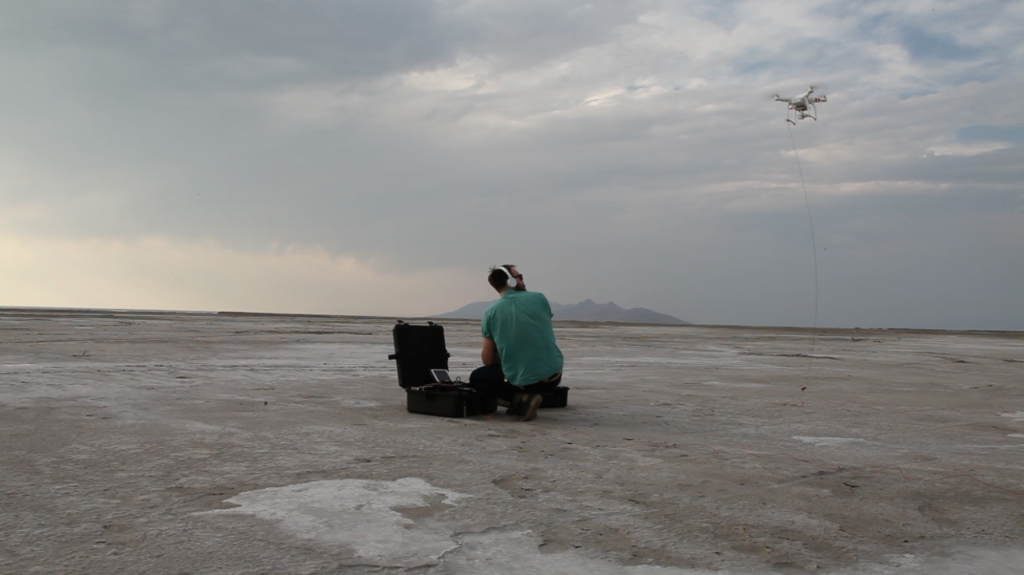 GeoRhythmic Drift Music is part of an experimental music movement that, not surprisingly, began on the U.S. West Coast a century ago but gained momentum post-World War II when John Cage set forth his revolutionary musical philosophy. There was Morton Feldman, the American composer, whose works set a far different path from well-known minimalists such as Terry Riley, Steve Reich and Philip Glass. As the pianist Marc-André Hamelin describes in an NPR interview about his 2017 recording of Feldman’s For Bunita Marcus:

It has many repeated patterns, and one can perceive certain sections which deal with just the same few repeated notes. But just view it as anything you can care to imagine. You can see it as the immensity of space and looking at the irregular patterns of stars. In the liner notes, I referred to it as watching the swing of a four-dimensional pendulum. 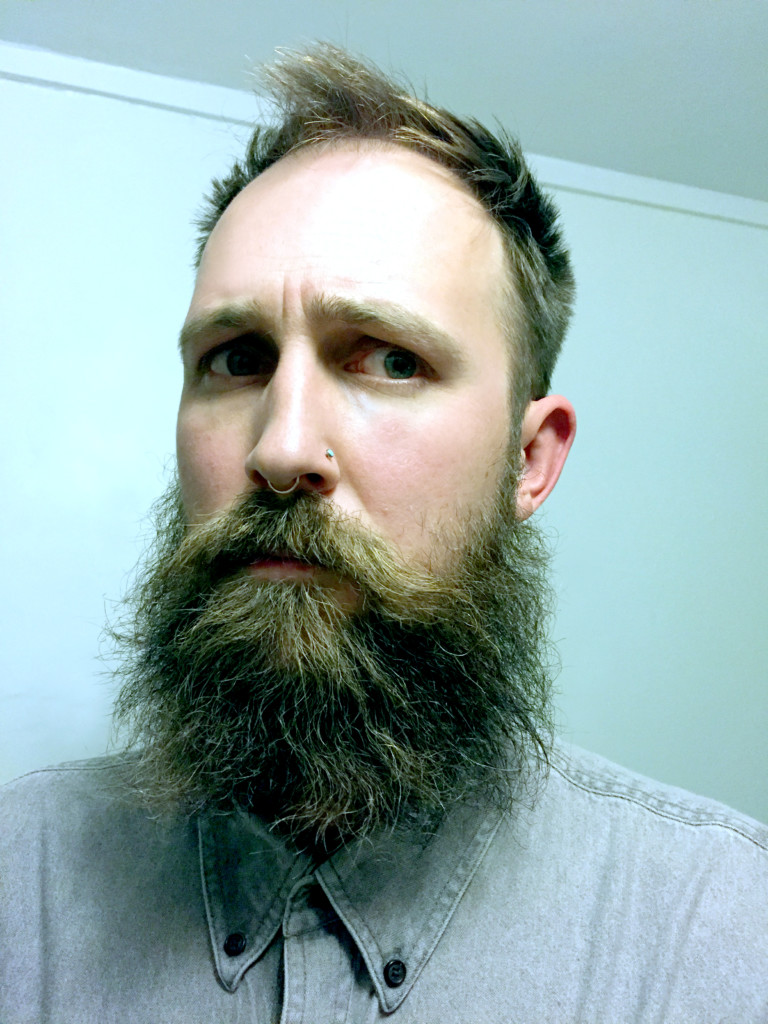 Another important source of inspiration for Ruehlen comes from the Pulitzer Prize winning composer John Luther Adams, who has lived for decades in Alaska. Opened in 2006 on the day of the spring equinox at the Museum of the North on the University of Alaska at Fairbanks campus, The Place Where You Go to Listen installation is in the midst of a performance that will go on eternally, or hopefully as long as there is a civilization to monitor and sustain it.

As Alex Ross, The New Yorker music critic, wrote in his book Listen to This, “The title refers to Naalagiagvik, a place on the coast of the Arctic Ocean where, according to legend, a spiritually attuned Inupiaq woman went to hear the voices of birds, whales, and unseen things around her. In keeping with that idea, the mechanism of The Place translates raw data into music: information from seismological, meteorological, and geomagnetic stations in various parts of Alaska is fed into a computer and transformed into a luminous field of electronic sound.”

GeoRhythmic Drift Music signifies the desert as much more than a remote, desolate, forbidding, eerily silent place without much of a human footprint. Once someone moves off the grid and finds the sweetest isolated spot, there is opportunity to capture noise that compels the listener to consider it in a whole new realm. Feldman frequently encouraged listeners to hear his music with the volume turned lower than to which they might be accustomed.

There are several intriguing aspects of Ruehlen’s installation. The exhibition incorporates eight television monitors placed with the screens facing upward, placed on snare drum stands. “This emphasizes the rhythmic’ character,” he explains. “These will be isolated (headphone) listening stations from the drone’s perspective.” 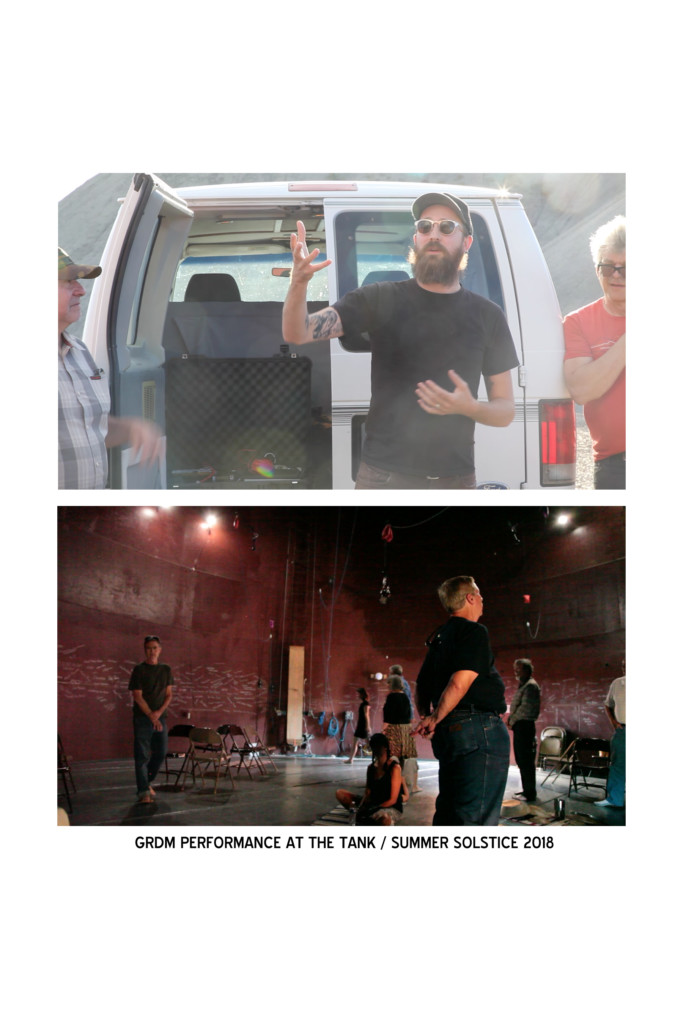 At first glance or listening, exhibition visitors might assume that the music and sounds are similar to each other. But, soon, the resonances, textures and character of sounds evolve subtly and their differences matter more significantly, as they proceed naturally. In an age where music often is blaring at much louder volume than necessary through ear buds from a portable mobile device, Ruehlen’s sonic experience returns listeners to a simple but profound revelation that supersedes our predilections for overproduced and overprocessed sounds.

The performer is not visible to the audience nor necessarily in close proximity. Thus the listening experience is not shaped by the performance trappings we take as customary – the setting, time or the occasion of the concert. In late July, audience members listened to his remote sonic broadcast, which was transmitted from the Bonneville Salt Flats to the Churchill Junior High School parking lot, where they listened by communally tuning in via car radios. In addition to a “mobile laboratory” book he wrote and designed, there will be a large projection video of the parking lot transmission. 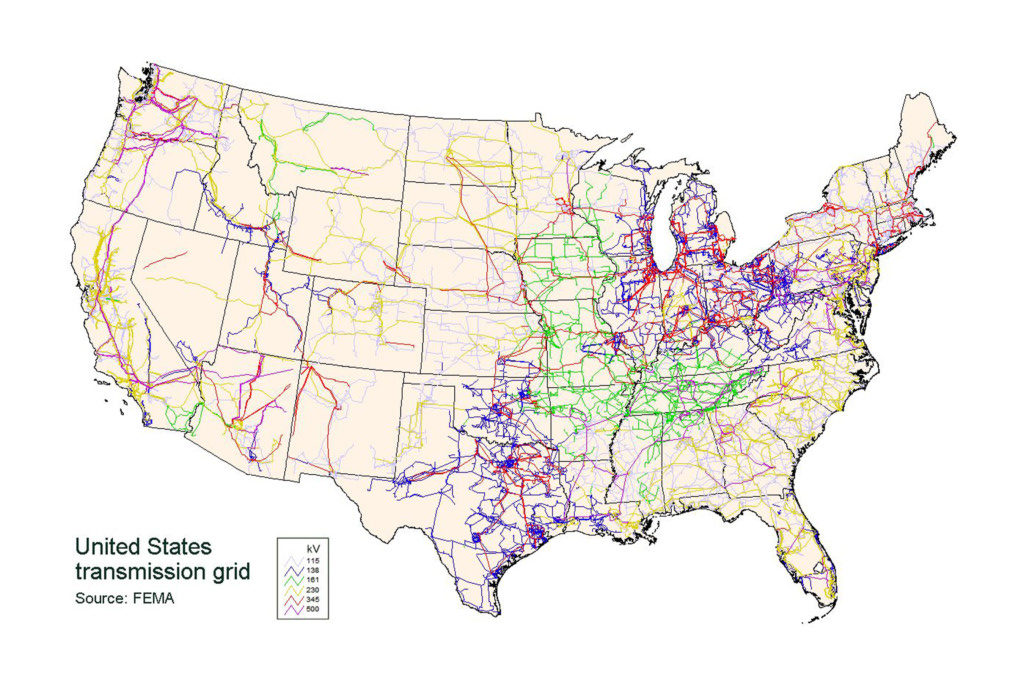 The deepest listening experience occurs with the focus on the music of a place being transmitted from a remote location where the sensations of time, sound and space synthesize into a different realm. Ruehlen says that the ideal impetus for performances is a public, open space. “Imagine having 100 or more cars in a parking lot with their car radios tuned to the frequency, creating a sound system loud enough that everyone can be outside looking up at the sky while they listen to the performance,” he explains.

Music takes many forms in the desert. The white noise or static doesn’t seem annoying or numbing. An AM band radio station might crackle momentarily featuring a Spanish language broadcast or right wing conservative talk show. Some feeds come in with stunning clarity for a brief moment only to be subverted by other sounds of natural or man-made phenomena.

Indeed, the experience brings back a bit of sonic nostalgia reminiscent of the widespread curiosity many people had for radio in the early 1900s, when stations from the broadest swath of locations possible came in clearly enough at nighttime for listeners to enjoy. 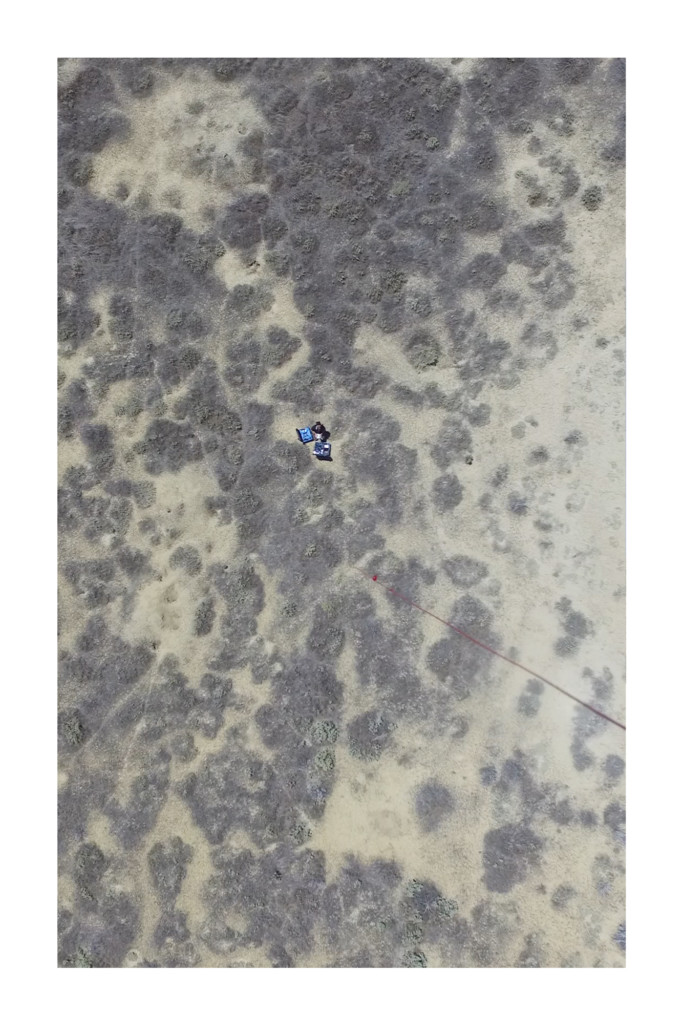 The new exhibition is the ideal aesthetic and philosophical companion to a current exhibition at UMOCA – Working Hard to Be Useless. As described last month in a preview at The Utah Review, that show is a spiritually rich new multimedia exhibition that “testifies to the ‘avant garde of presence’ in how artists subvert the prevailing culture, which dictates defensive architecture and the confining boundaries of leisure and pleasure in urban space.”

Ruehlen is co-founder and curator of the Shadowtrash Tape Group and manages The Flinching Eye Collective, a group of interdisciplinary media artists, founded in 2011, whose enclave of work, while disparate, concurrently explores sound-based, interactive performances and video.

One of Ruehlen’s recent collaborations include 2057,a sound project on which he worked with Mark Amerika. Recorded at the Boulder campus techne_lab, the album remixes Amerika’s vocals and spoken word poetry with Ruehlen’s experimental jazz compositions. The opening track is described by the artists as representing “‘the body is an illusion that repeats itself,’ which refers to a form of Kundalini consciousness that projects itself over great distances beyond the space-time continuum and shatters not just the traditional forms of self-embodiment, but the notion of time itself.”