Utah Opera’s 2016-2017 season closes with one of Mozart’s most popular operas, Don Giovanni. The 2016-17 season has been marked by serious operas with themes ranging from PTSD and the effects of war, to violence against women and political expression. Don Giovanni continues that trend with an updated production that shines a stark light on Giovanni’s remorseless and relentless pursuit of women. 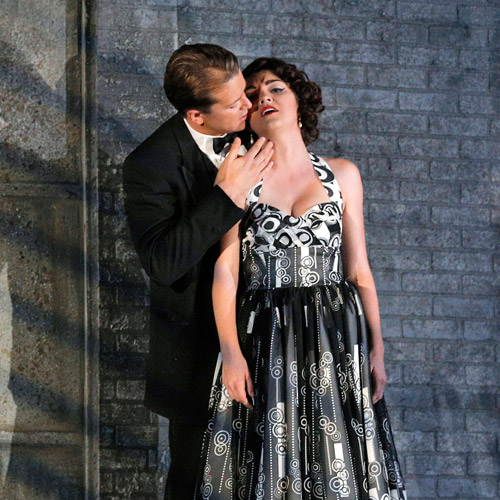 Don Giovanni tells the story of a serial philanderer who has had thousands of women as his conquest. The action takes place over roughly two days when his past catches up to him, with a former lover trying to expose him for the villain he is, and another couple seeking revenge for his actions.

Utah Opera’s production takes a very different look at the opera and places it in a mid-20th century film noir influenced setting. This is an interesting choice that was very effective for some elements, but I found it detracted from the story in some places. The film noir setting played very well for defining some of the characters. It made it very easy to see Donna Anna as the ingenue and victim in the story. Donna Elvira was a strong and convincing femme fatale. Don Giovanni is the classic villain protagonist. I almost wish that some of the supporting characters had been taken to more extreme to fit into the noir archetypes — Don Ottavio could have been pushed into the private detective role without too much trouble.

The ensemble of the lead characters was one of the strongest I’ve heard at Utah Opera in recent years. The balance and energy between the characters was very dynamic, from Joshua Hopkins as Don Giovanni, down to Richard Wiegold as the Commendatore. The Trio near the end of Act 1 (Protegga il giusto cielo) with Melinda Whittington, Caitlin Lynch and Aaron Blake was one of the most luminous and breathtaking moments of the night.

One of the standout aspects of the whole opera was the lighting by Nicholas Cavallaro. From moody spots for a cigarette smoking servant, to looming and ominous figures haunting the minds of characters, the chiaroscuro lighting was crucial in creating this film noir world.

One challenge of the updated setting that I felt was missing was the level of aristocracy that Don Giovanni holds. Without a clear framework for how he would interact with Masetto and Zerlina as a nobleman, his offer for protection and Zerlina’s response to his advances is murky and confusing. On reflection, I do prefer a more traditional ending to the opera, rather than the one presented in this production, but it’s always nice to have a different perspective on a character’s final scenes and motivations.

Utah Opera’s Don Giovanni continues through Sunday, May 21 at the Janet Quinney Lawson Capitol Theatre. Tickets can be purchased at utahopera.org or arttix.org