NOTE: This is the first of two parts about this year’s Great Salt Lake Fringe, which includes reviews of three shows. Part II will highlight reviews of four other shows.

For its fourth year, the Great Salt Lake Fringe festival (Aug. 2- Aug. 12) is testing its new venue space at the Gateway shopping center in downtown Salt Lake City, which, for the first time, has placed all of the performing venues within approximately 350 feet of each other. This year’s GSLF also is providing some good street intelligence, as city and downtown leaders are cultivating the cultural core concept known as The Blocks SLC, which was announced last month.

This year, pre-festival ticket sales were quintupled over last year. More than 30 shows, including world and regional premieres, have been scheduled in four venues. Three were former retail stores and the fourth is the new home of the Wasatch Theatre Company. Several performers come from the Fringe circuit which has developed across the country but with a handful of exceptions, the performers and creators of this year’s slate are newcomers to the GSLF. Performers paid anywhere from $55 to $85 per performance, depending upon amenities in the venues so the highest cost a show paid this year was approximately $500. Also, no show is permitted to run longer than an hour. 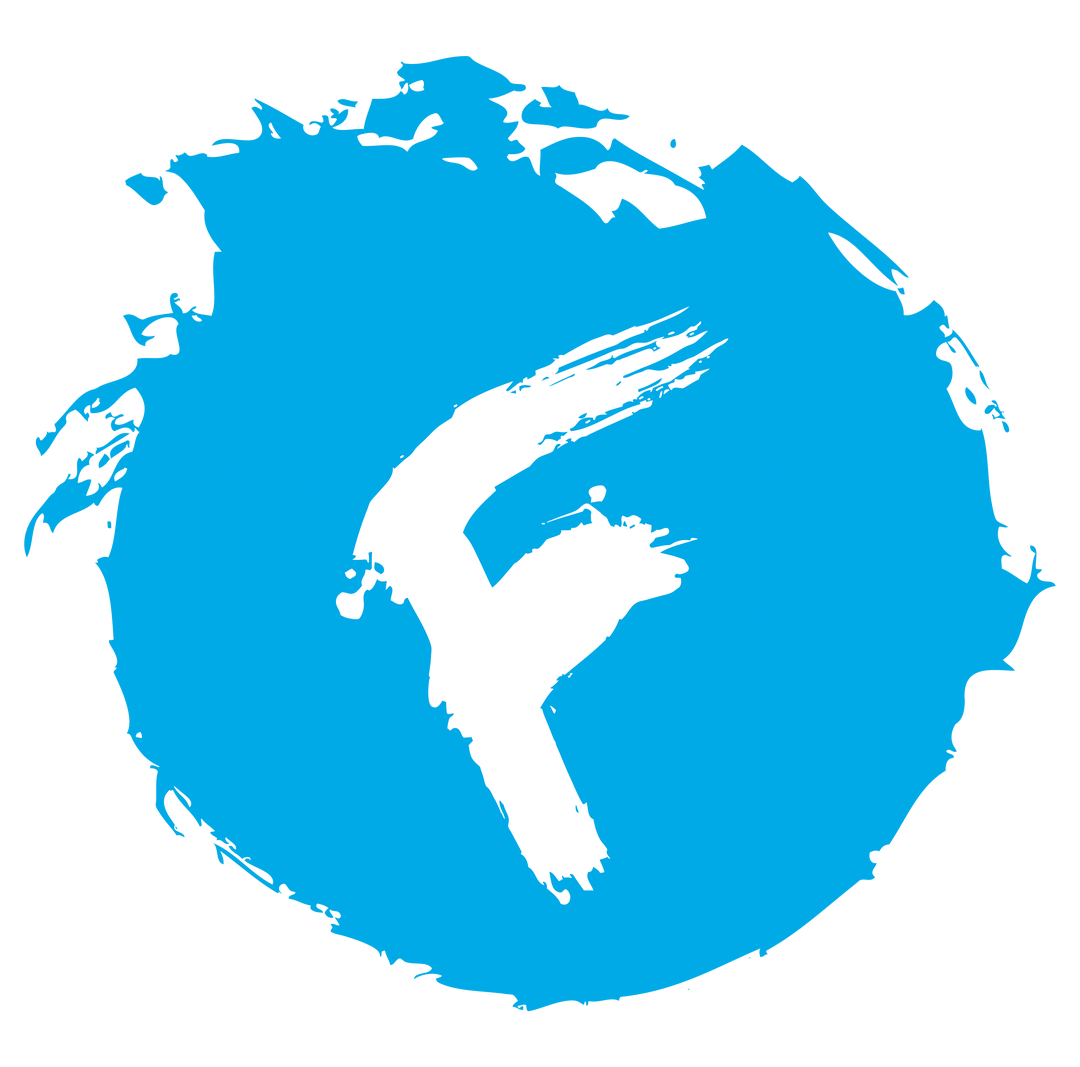 The Saturday schedule for Aug. 4 has been the busiest of the festival, which continues later this week, from Thursday, Aug. 9, to Sunday, Aug. 12. Thirty-three performances were held, and some impulse ticket sales brought members of crowds from a nearby food truck and brewery event to several shows.

In addition, all of the ticket sales revenue is paid out to each performer or group, based on their cumulative audience numbers. Last year, from the $25,000 pool of ticket revenue, nine shows received payouts of more than $1,000 each. Because the Fringe model puts every performer on as equal a playing level as possible, it is up to the individual show creators and performers to promote and advertise their work.

Several took to various social media to publicize their efforts. One example was Prufrock Productions which presented the regional premiere of Marty Has Cancer, a play by Austin Archer (See Part II tomorrow for a review). The Salt Lake City playwright’s work was premiered in June at the Hollywood Fringe. Every performance was either sold out or had standing room only. Shianne Gray, festival managing director, says that GSLF staff gently nudge some performers to take as much advantage as possible of using their social media presence to promote their shows.

GSLF’s visibility has grown steadily, since it was founded in 2015 by Michael and Nina Vought, faculty members at Westminster College. The festival, which operates on a budget of less than $50,000 has relied on scores of volunteers, including those with technical staging experience, along with students from the private liberal arts college who have gained valuable hands-on experience with event planning and arts management. For example, student Melissa Salguero is box office manager and implemented an easy-to-use digital ticketing system.

GSLF also has become an important stepping stone for several artists and shows. One of the most prominent examples is Sackerson, a Salt Lake City theatrical company now recognized as one of the most innovative of its kind in Utah. Last year, its one-actor show Do You Want to See Me Naked?, written by Morag Shepherd and performed by Elizabeth Golden, took festival honors as best solo show and critic’s choice. The play was performed last winter at the Tucson Fringe Festival and next month, Sackerson and Wasatch Theatre Company will present three performances of the play. Sackerson is planning to take the show later this year to New York City’s United Solo Festival.

In addition, Hindsight, also a play by Morag Shepherd, is an added feature for this year’s Fringe. The Sackerson production, which is an immersive live theatrical play at various locations in the downtown district, has been in a run that has extended to three months.

Also, from last year, Dan Higgins, a choreographer and performer with the Repertory Dance Theatre (RDT), reworked a critically acclaimed piece that became In. Memory. Of., An Evening of Storytelling and Dance, which was performed last winter as part of the RDT’s Link Series. This year, Higgins came in as a late replacement to be one of the dancers for Flicker, a work by Cat + Fish Dances (See Part II tomorrow for a review).

The shows range in treatments suitable in range from family friendly to mature audiences only. This year, The Utah Review selected seven shows to review that represent the spectrum of the Fringe’s offerings, which include short theatrical productions, dance, solo shows and youth-oriented programming. The first three are reviewed below: 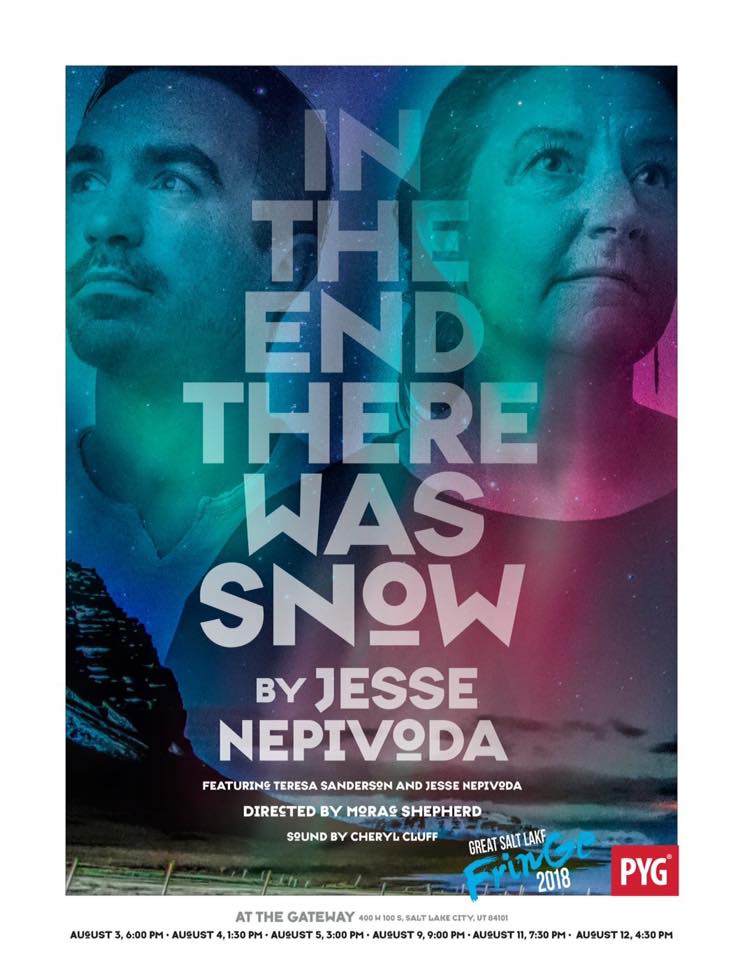 Fringe festivals are ideal platforms to present work either that exemplifies the appeal of intimate performances in a nontraditional setting or liberates the performer from conventional expressions to test absurd, subversive, or taboo-breaking elements. As for In The End There Was Snow, a new play by actor Jesse Nepivoda, the result is a finely wrought chamber theatrical ensemble piece, directed by Shepherd. Nepivoda performs in the piece along with Teresa Sanderson, truly one of Utah’s best-known and widely sought theatrical actors. Sanderson’s character is terminally ill and the work is set mainly in Iceland, where the two have gone to make the final journey.

In a Facebook post, Nepivoda explains why he wrote the piece. Nepivoda and Isabel Crews, now his wife, moved from the Washington, D.C. area to Salt Lake City. As they were dealing with the stresses and frustrations of finding jobs and settling into a new home and environment, he recalls, “It wasn’t a great time. We were both pretty dejected. It was hard to feel like we weren’t contributing to anything, like we were doing nothing but taking advantage of family, and that we weren’t able to even simply provide for ourselves.”

Nepivoda’s words provide the elucidating context for the work. It is simple, straightforward but it provides an organic emotional connection that rings with a certain elegant sincerity. Sanderson, as she always achieves in her performances, commands the performing space with absolute conviction. Nepivoda, likewise, shades his role with that understated acknowledgment of wondering, indeed, if he is helping adequately his dying companion find the comfort and solace before she passes.

There is one exceptional scene where the two sit facing each other, engaged in silent movement and gestures. It represents beautifully the transfer and transmission of legacy, love and memory. We know that both have accepted and are now prepared for what must happen. It’s a worthy work by an actor, who truly loves and appreciates the therapeutic value and encouragement of theater.

The Ballad of Emotional Incompetence – MotionVivid

Dat Nguyen, who is from Vietnam, is a dancer, choreographer, photographer and videographer. Now living and working in Salt Lake City, he is a graduate of Sam Houston State University’s dance program which is one of the nation’s best known for incorporating technology and visual elements. Nguyen currently is pursuing a master’s degree in dance with a Screendance certificate at The University of Utah. With MotionVivid, his own artistic entrepreneurial enterprise, Nguyen assembled dancers to create a work that reflects his own struggles and tensions as he tries to find his place in the community.

It’s a raw, unrefined and extraordinarily frank expression that lasts roughly 35 minutes. Definitely intended for mature audiences, the work is filled with numerous sexual references and eroticism. The dancers end up clad in their underwear with abundant use of lipsticks and body markings. There is a video clip, the use of strobe lighting, and many torn bits of toilet paper. There are some vulgar references and suggestions of violence. There is a poem by Meli Penfold and a wide-ranging selection of music, including Bonnie Tyler’s “Holding Out for A Hero,” the song featured in the 1984 Footloose film.

One might be tempted to characterize Nguyen’s work as playing to gratuitous senses but, as the title suggests, the interactions signify the absence of emotional connection. In the spectacle he has created, coldness, distance, aloofness and disembodiment are apparent. The dancers simulate a flock of sheep at several points. It’s a good metaphor for representing how someone from abroad attempts to assimilate into his new home and to find the ground for synthesizing an old and new identity.

Fringe can be useful as testing a new work’s potential. The blocking and staging for the work definitely could be improved, especially in attempting to fit so many dancers in such a small space. The current venue also was not conducive to video presentations.

Nevertheless, Nguyen can rework the piece to leverage the underlying concept, especially in conveying the tension that comes with trying to breach the barrier of emotional incompetence and find suitable common ground for earnest impassioned acceptance. But, Nguyen’s work also rises precisely to the artistic challenge of Fringe, and dance, in its uniquely ephemeral environment, serves this creator’s purpose for articulating an inner experience that words alone might not account for sufficiently. 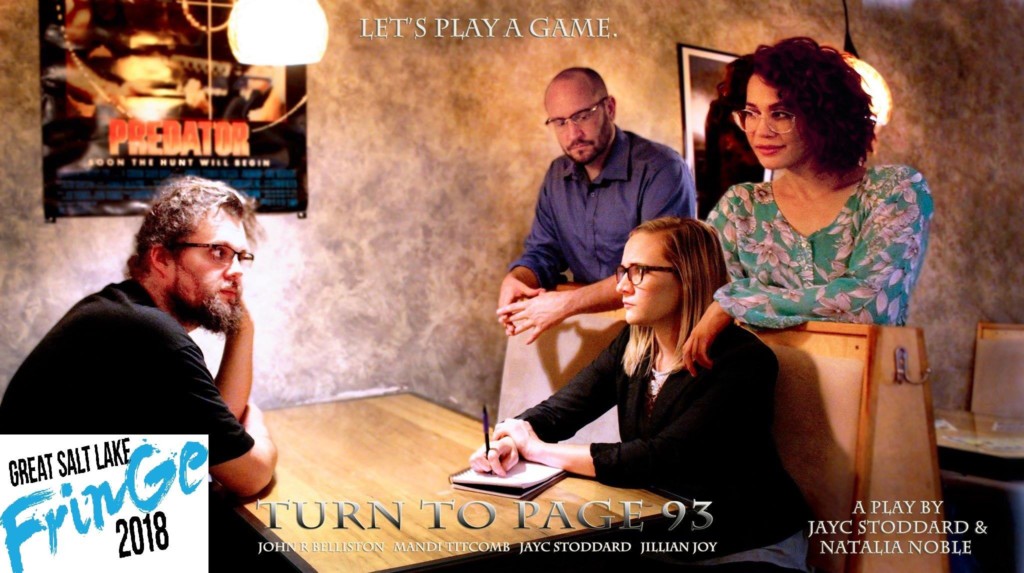 Turn to Page 93 is a fun, absorbing play with more than a generous serving of surprising plot turns. The playwrights — Natalia V. Noble and JayC Stoddard – have had a good track record at the Fringe. They wrote Round^2 for the 2016 event and Exposure, in 2017, won the festival’s audience choice award. Directed by Josh Patterson, the production features four characters acted by John R. Belliston, Mandi Titcomb, Jillian Joy and Stoddard. The thematic premise is simple enough about the limning of truth, facts and narrative.

Indeed, the play is like a game. Two of the characters are setting up for a podcast interview. In the first few moments, the story opens with details about Skylar committing sexual assault on Erica, after an evening involving alcohol. There is a distinct soap opera feel to the opening of the play but it takes on a whole new dynamic when the remaining two characters arrive. Gavin is a convicted murder who is now free and is set to be interviewed by Erica. Gavin (played by Stoddard) is accompanied by Evelynne, an enigmatic companion at the outset but whose presence becomes clarified in the most unexpected ways.

Turn to Page 93 is perfect for the Fringe stage. There is something delightful to be said for the zeitgeist taken in the work. The twists often are gnarled, bizarre, grotesque and straining credulity at times. There is a fetishization of the plot twist in the play but it also suits this particular type of mystery crime fiction with entertaining satisfaction. There’s a pleasurable thrill to be had from this production. It’s well acted and well paced.